Meet the British journalist who's banned from 26 European countries - Canary 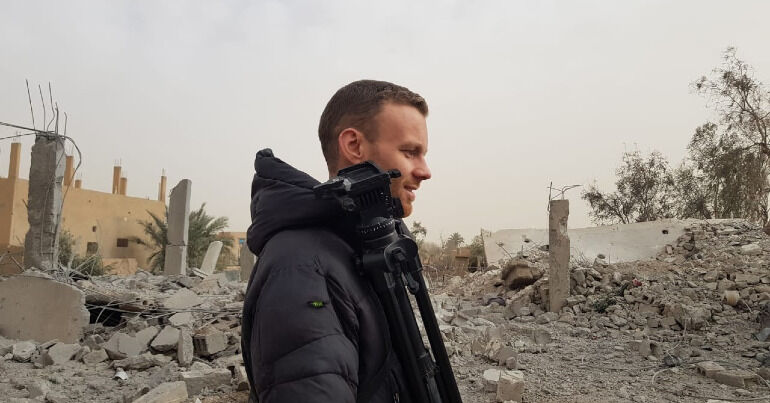 This is Matt Broomfield. He’s a professional journalist from the UK, banned from 26 European countries, just for doing his job.

Earlier in 2021, Broomfield was detained at the Italian border while on holiday in Greece, thrown into a Greek detention centre, and imprisoned for two months. He was subsequently banned from the 26 countries that make up the Schengen Area for ten years.

While imprisoned, he had a taster of what life is like for refugees trapped in European detention centres. Broomfield said:

My two months in detention were just a brief taste of what many refugees, political activists and journalists from the Middle East and beyond must spend a lifetime enduring. My case provided a window into the violence, squalor and farce of day-to-day life in the EU’s detention-deportation machine.

You can read his account of his experiences here.

A threat to European ‘democracy’

Broomfield hasn’t been given any reason as to why he has been banned from most of Europe, but it is almost certainly because he volunteered as a journalist in North and East Syria (NES), more commonly known by its Kurdish name of Rojava. A region of around 3 million people, the people of NES organise themselves using a model of direct democracy, attempting to give power to the grassroots. It is a society that centres on women’s liberation, religious tolerance, and minority protection as key.

European countries see democracy, in the true sense of the word, as a threat, because they rely on their populations believing in a façade that is labelled as such. NES’s model of grassroots organising has inspired a whole generation of Leftists around the world, so even though the region has been a key ally with the US in fighting Daesh (ISIS/Isil), it is still seen as a grave danger to capitalist countries.

Broomfield suspects that Turkey has been instrumental in him being banned from the majority of Europe. He says:

Since I have never had anything to do with the German authorities, and given Germany’s strong trade ties and strategic relationship with Turkey, it appears likely Turkey asked Germany to issue the ban.

Turkey has massive sway over the Schengen countries. Turkey is the largest host of refugees in the world, with some 3.7 million refugees within its borders, trying to find a passage into Europe. Broomfield continues:

[Turkish president] Erdoğan is able to use the millions of Syrians now resident in Turkey to tacitly or openly threaten Europe with another influx of refugees if they do not accede to his demands.

Turkey has done its utmost to destroy the revolution in NES. It has attacked and occupied parts of the region, backing militias to torture and rape residents. It has carried out bombings and drone strikes on inhabitants, and attacked NES’s water supplies. Women are continually murdered by Turkey and affiliated groups. In 2019, Hevrîn Xelef was murdered by a “jihadist gang allied with Turkey”, while in June 2020, Zehra Berkel, Hebûn Mele Xelîl, and Amina Waysî were murdered by a Turkish drone strike in Kobanê. On top of this, Turkey has been accused a number of times of funding and arming Daesh and other extremists in Syria, and yet it still continues to be a key ally of both Germany and the UK.

Alistair Lyon, a solicitor at Birnberg Peirce, spoke to The Canary about Broomfield’s ban. He said:

It is speculation at this stage as to who is involved beyond Germany, but the decision is certainly in accordance with Turkey’s view of the conflict and it is known to lobby extensively within Europe to promote its views.

A decision made in secret

Lyon went on to say:

The particularly concerning feature here is that a highly controversial political decision, dressed up as a decision in relation to national security, has been made, in secret and without notice or possibility of prior challenge. This immediately calls into question its legitimacy.

Broomfield isn’t the only person from the UK who has been banned from the Schengen area because of his stay in NES. Meanwhile, the British state has attempted to prosecute some of those who have fought for the very same forces that defeated Daesh.

highlights the concerted efforts by European nations to suppress dissenting voices who support or sympathetically report on the Kurdish struggle in Rojava.

The lack of British government assistance for Matt Broomfield sends a message that solidarity with the Kurds, where no laws are broken, is liable to place campaigners outside of basic human rights protections expected by citizens in Britain and in EU states.

It escalates the already disturbing use of terrorism laws to criminalise those who have travelled to resist the Islamic State in any manner in northern Syria, by a British government that has happily sold arms to the Turkish state that killed British citizens like Anna Campbell.

The Canary contacted the Foreign Office for comment but had not received a response at the time of publication.