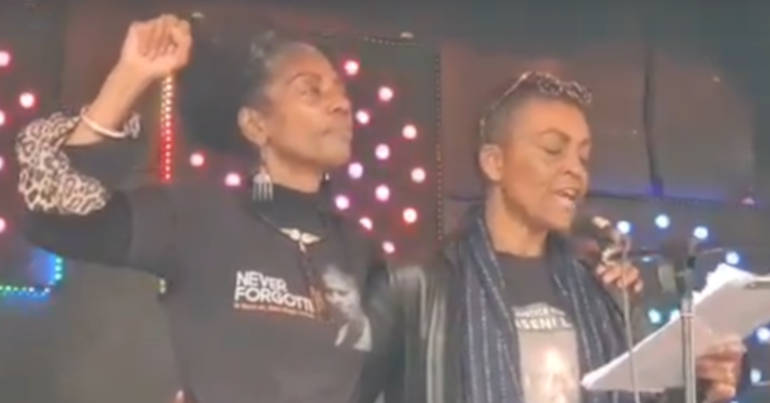 On 29 October the families of people killed by the state, along with thousands of their supporters, marched on Downing Street to deliver a letter to Rishi Sunak. In Edinburgh, a solidarity demonstration demanded a meeting with Nicola Sturgeon.

The United Friends and Families Campaign (UFFC) is a coalition of those affected by deaths in police custody, in prisons, in immigration detention centres, and in psychiatric care.

At least 1,838 people have died in police custody or following contact with the police since 1990 according to Inquest, a charity monitoring state-related deaths. People of colour are at least twice as likely to be killed in custody in incidents involving restraint or force, and nearly two times as likely where mental health is an issue. Meanwhile, inside the UK’s prisons, one person takes their own life every four days.

UFFC refuse to forget the victims of state violence. They have been marching since 1999, and newly bereaved families keep on joining the coalition. This year the march was joined by the families of Chris Kaba and Oladeji Omishore, amongst many others.

The UFFC thanked their supporters after the march on Saturday:

Thank you everyone who supported us to walk to Downing St on Saturday and in Scotland, it’s appreciated. New families including Chris Kaba’s joined us. There’s not a reduction in British police killings and people dying in custody. Justice and challenging police powers is a must pic.twitter.com/4eGC95TppG

The London march began with speeches in Trafalgar Square. Then the demonstrators lined up behind the families, and marched on Downing Street.

The marchers carried placards bearing the photos of those killed. Demonstrators chanted “No justice, No peace, No racist police” and “HMP [‘His Majesty’s Prisons’], Blood on your hands”.

As the families reached Downing Street, a sound system was set up and the names of those killed in custody were read out. One marcher posted this poignant video:

Oladeji needed care, but was met with brutality

Oladeji drowned in June 2022 after he fell into the Thames while trying to escape police officers who had already tasered him repeatedly. His father told the crowd:

My son was caring, compassionate, giving and artistically talented, with a deep appreciation for nature. But on that fateful day he was vulnerable, in mental health crisis, clearly distressed and in painful agony. He needed support and medical intervention but was instead met with brutal, brutal excessive force.

People also carried banners to remember those who have died in prison, in immigration detention centres, and in psychiatric care.

One banner remembered Taylor, a prisoner who took his own life in July 2021 after serving over 14 years of an Imprisonment for Public Protection sentence. (IPP). IPP prisoners have an indeterminate sentence with no release date, and their freedom is in the hands of the parole board, making IPP sentences equivalent to a life sentence for minor crimes. Taylor served a four-year tariff for burglary, and then spent a further ten years behind bars. He was beaten by prison officers shorty before taking his own life.

248 IPP prisoners have died in prison, with at least 74 of them taking their own lives. The IPP sentence was scrapped in 2012, but not retrospectively. Campaigners are calling for an end to the torment for the almost 3,000 remaining IPP prisoners in England and Wales.

Placards also remembered Jimmy Mubenga, who was killed in 2010 after being restrained by G4S officers during a violent forced deportation.

Melanie Leahy addressed the crowd outside Downing Street. Melanie’s son Mathew died in 2012 at the Linden Centre psychiatric unit in Essex, after he was raped. In total, 11 people died in the care of psychiatric units in Essex between 2004 and 2015. Here is a video of Melanie’s speech:

“I believe in the power of the people”

The crowd heard from Mohamed Bashir, brother of Mouayed Bashir. Mouayed died in 2021 after being restrained by police at his home in Newport. The family are still waiting for an inquest to take place.

In a recent interview with the South Wales Argus, Mohamed explained how he has little faith in the Independent Office for Police Conduct (IOPC):

When we went to the hospital after Mouayed died, two people from the IOPC came and saw me and I recognised one, so I asked if they were in the firm and they said they used to be police officers.

If your family member gets killed by a police officer, it gets handed straight over to the IOPC who are still involved in the police and are ex-police officers.

There’s never going to be an end to this because the people who are there to protect us won’t protect us.

Here is a video of Mohammed addressing the crowd on Saturday:

The more of us, we can take them down. Because I believe in the power of the people… is greater than the people in power.

Jefferson Bosela also addressed the crowd. Jefferson’s cousin, Chris Kaba, was shot by the Metropolitan Police in Streatham in September 2022. Chris was unarmed.

Jefferson spoke about the importance of friends and families standing together in the face of injustice. He said:

It is not only wise but also prudent for families and the people to stick together during troubling times. For we, we the common people spend days, hours, years, decades and sometimes lifetimes fighting for justice. We are all we have.

The UK government is “accountable for these deaths”

The UFFC called for a meeting with Rishi Sunak, Sadiq Khan and Suella Braverman. Brenda Weinberg read out a letter to the prime minister outside Downing Street. Brenda’s brother, Brian Douglas, was killed in 1995, after being struck on the head by a police baton:

Failings within mental health services across the UK are at an all time high. As prime minister, you and your government are ultimately accountable for these deaths.

The recent horrific deaths of Christopher Kaba and Oladeji Omishore have yet again highlighted the issues of deaths in police custody, and the outrage and anger across all communities… The independence of the IOPC is again called into question, and the issues of treating officers as witnesses, the suspension and interviewing of officers, the use of tasers and force used on vulnerable people, stop and search, strip searches (including minors) are a matter of the greatest concern to the public.

We need to support those affected by state violence

If we want to overcome the state’s structural racism and build systems of justice that are not based on violence and coercion, and where mental health crises are met with care rather than brutality, then we need to listen to the people who have lost their loved ones to state violence. As the UFFC says:

Justice and challenging police powers is a must.

Click here to find out more about the campaign.