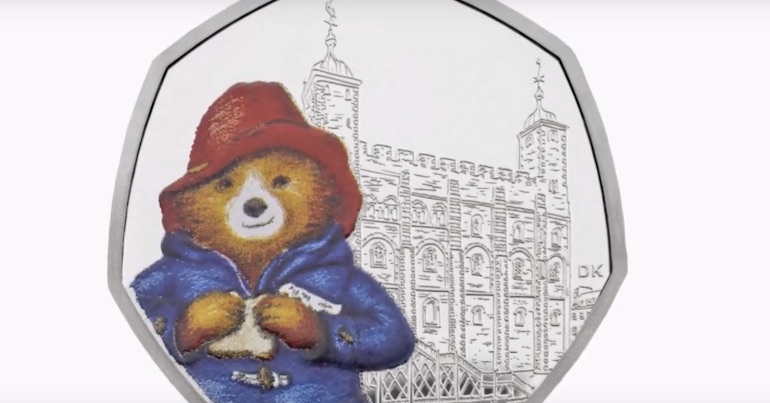 The royal mint has launched a series of new 50p pieces featuring Paddington Bear. These commemorate a much-loved fictional character. But they should also shine a bright light on our government’s shocking treatment of child refugees and asylum seekers.

Michael Bond’s stories, about an orphan bear from “deepest darkest Peru”, were inspired by:

his memories of newsreels showing trainloads of child evacuees leaving London during the war, with labels around their necks and their possessions in small suitcases

Since 1958, Paddington Bear has been the UK’s best-known child refugee:

People around the UK have celebrated the whimsical new 50p coin. Yet the government’s treatment of refugees and asylum seekers in 2019 is shocking. There’s no whimsy here.

‘Please look after this bear’

The UK government’s hostile environment is brutal for young refugees and asylum seekers.

In 2016, Lord Alf Dubs proposed an amendment to ensure that lone children fleeing war and conflict could travel safely to the UK. Known as the ‘Dubs Amendment’, it established a legal way “to relocate and support unaccompanied refugee children from Europe”. This intended to help “3,000 children from war-ravaged countries”.

According to Dubs, in 2016, then home secretary Theresa May asked him to withdraw the amendment and said: “If we take these children, others will follow”. He ignored her, and the amendment passed through the Lords.

As the Conversation reported:

Every year, 2,000 to 3,000 children arrive in the UK alone, without parents or guardians, to seek asylum…

Many trying to appeal asylum or refugee decisions face “the threat of deportation and detention with little support”.

‘I’m not a criminal,’ said Paddington

On 12 August, just one day before the coins launched, an inquest heard the shocking details about 19-year-old Osman Ahmed Nur. Ahmed Nur, a refugee from Eritrea, hung himself in 2018. As the Guardian reported, this came:

He had hid with a friend in a “refrigerated lorry that arrived in King’s Cross got out and claimed asylum”. As asylum seekers, they were expected to survive on £37.75 per week and were banned from working. Risikat Sanni, a support worker at Ahmed Nur’s hostel, told the inquest she’d not:

A 2017 report by the children’s commissioner found that children’s experiences of the UK immigration system were:

largely negative; they perceived the system as adversarial, confusing and stressful, with few exceptions…

Evidence indicates that the experience of being at the mercy of immigration decision makers can have serious and devastating consequences for children’s emotional wellbeing.

Before his death in 2017, Bond seemed acutely aware of the power of his fictional bear and the reality for child refugees under this government. In 2015, he “forwarded” a letter with one of his characters saying she’d like to “set the children free and lock up a few politicians in their place”:

Few child refugees and asylum seekers in the UK find safety and love. Every single Paddington Bear coin should remind us of that.

These children deserve so much more. So we need to keep challenging this government until they get the dignity, love, and support they deserve.