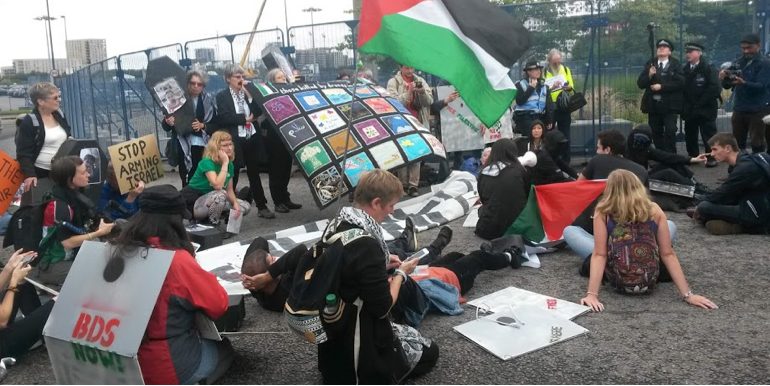 One of the world’s largest arms fairs is taking place in London this September. And people are getting ready to shut it down before it even begins.

Defence and Security Equipment International (DSEI) takes place every two years at the ExCeL centre. It describes itself as:

DSEI 2019 is already surrounded in controversy, though. Because the government has invited a delegation from Saudi Arabia despite a Court of Appeal ruling that arms sales to the regime are “irrational and therefore unlawful”. Meanwhile, a delegation from Hong Kong has also been invited despite the foreign office previously promising to suspend teargas exports to the territory.

The full list of countries officially invited by the government to attend DSEI is here. But it’s a long list including many countries with appalling human rights records and/or currently engaged in conflict.

Andrew Smith from Campaign Against Arms Trade told The Canary that DSEI couldn’t happen without the “active support” of the government:

DSEI will bring some of the most authoritarian regimes in the world together with all of the biggest arms companies. The focus will be on one thing only, and that is pushing for even more arms sales.

None of this could happen without the active support of Government. Civil servants will roll out the red carpet and be on hand to welcome delegations. Meanwhile, Government Ministers will take to the stage to announce new deals and sing their praises.

Stop the arms fair before it even starts

But DSEI isn’t going ahead without opposition. While DSEI itself takes place between 10 and 13 September, protests are called from 2 September. The idea is that, through causing enough disruption, the arms fair can be stopped before it even starts.

As lorries and trucks transporting armoured vehicles, missiles, sniper rifles, tear gas and bullets attempted to get on site, people from around the world were there to put their bodies in the way.

And it asks a simple question:

Over 100 people were arrested during protests in 2017. Many were acquitted of all charges. As one of the defendants previously told The Canary:

Although several of these acquittals were successfully challenged by the Crown Prosecution Service, the Court of Appeal ruling coupled with the invitation to the Saudi delegation make the legal case for shutting DSEI down even stronger.

So what’s the plan?

A #StopArmingIsrael protest will kick off the week of protests. The call to action states that DSEI will:

host a specially designated area for Israel’s arms companies to display and market their weapons – weapons which are labelled “battle-tested” due to them being tested on Palestinian civilians in Gaza.

Then, on 3 September, there’s a ‘Borders and Migration’ day of action. It asks people to:

Join us, and bring your own placards, banners, and creative actions. There will be talks, performances and actions, celebrating the future we want to see, where migrants and refugees are welcomed, not arms dealers.

And it stresses that “solidarity smashes borders”.

There will also be a day of climate action on 6 September. Plan C and the Kurdish Solidarity Network are planning:

workshops on social ecology and the Kurdish Freedom Movement’s eco-socialist paradigm, as well as Kurdish music and dancing.

The groups are planning on two days of action as part of an international #RiseUp4Rojava initiative (see more on the progressive revolution in Rojava, northern Syria, here). As its call states:

So if you stand against all the horrors of capitalist modernity, with its endless exploitation and domination, and countless gendered, class-based, racial and national violences, and if you desire a free and equal life for everyone everywhere, where we collectively, directly and democratically control our everyday lives, and can develop freely in ecological balance with the world around us, then join us on the 6th and 7th of September, and #RiseUp4Rojava.

On 7 September, this will be part of a Festival of Resistance. The festival points out that:

1 in 25 people in Newham are homeless. Instead of providing public housing, investing in public healthcare, and protecting workers rights, the government prefers to support an industry of death. One of the world’s largest arms fairs, DSEI, is returning to our doorstep (at the ExCel) and we’ll be there to resist!

As Smith told The Canary:

The arms sales being discussed at DSEI could have a devastating impact for years to come. It is vitally important that we take action. DSEI is the manifestation of everything that is wrong with the arms industry. That is why we need to shut it down for good.

So it’s down to all of us to take action and shut the arms fair down.