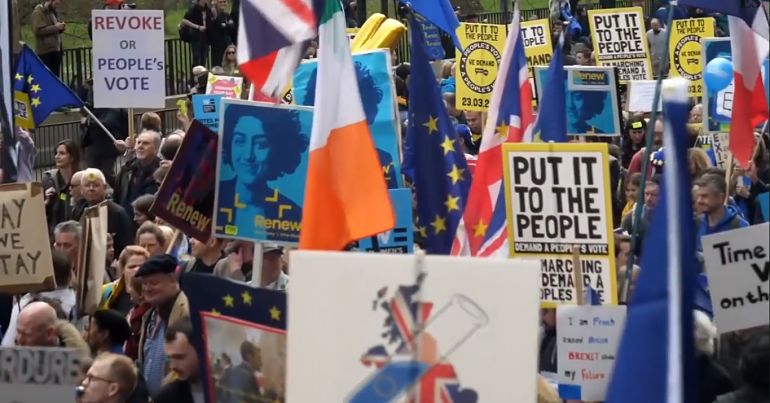 An analysis of opinion polls shows British people have turned against Brexit since the 2016 referendum. Since the vote to Leave, the UK government, supported by the DUP, has failed to come up with a viable plan to leave the EU. Yet the UK’s corporate media is now trying to blame the Irish for this, rather than focusing on this mood change that has been taking place in the UK since 2017.

This must come as a real slap in the face for Johnson’s adviser Dominic Cummings who has attempted to portray the Brexit debate as a ‘people V parliament’ debate. Cummings claimed MPs weren’t in touch with what people in the “real world” think. These polls clearly show British people have changed their minds since the 2016 referendum.

Analysts believe one key reason for the shift in opinion is caused by voters in Labour areas changing their minds. Additionally, younger people who support remaining in the EU can now vote, and elderly people who voted in large numbers in 2016 have passed away.

Blaming the Irish is avoidance

But rather than focusing on these poll results and the disaster that a no-deal Brexit could bring to the UK, the corporate media focuses on the Irish government. Ireland, of course, owes the UK nothing. In fact, it’s quite the opposite.

Yet as Fair reported on 11 October, the Conservatives and the establishment media seem intent on ‘blaming’ the Irish Taoiseach, or prime minister, Leo Varadkar for the ongoing Brexit impasse. As it noted:

Varadkar, whose country would have to deal with an entirely new border situation in the case of a no-deal Brexit, has a vested interest in pushing the UK and the EU toward some kind of an agreement. And the papers just aren’t having it.

Disaster the Brexit could create

For some time, the impact of a no-deal Brexit has been clear.

For example, retailers warned of food shortages if the UK were to leave the EU without a deal with the EU. This was confirmed to be a distinct possibility when details were released in the Government’s contingency document ‘Operation Yellowhammer’. The document stated there will be a reduction in the choice and availability of certain food and an increase in price “which could impact vulnerable groups”.

What Brexiteers promised during the referendum

In May this year, Johnson was summoned to face charges of misconduct over this advertisement. Yet this advert, in addition to claims made about refugees, is still on the Vote Leave website.

The main sticking point in finding agreement between the UK and the EU is the Brexiteer insistence that a customs border returns to Ireland. The reappearance of a hard border in Ireland could be very damaging for economies in both the north and south. One way around this is to have a border down the Irish Sea, but the DUP had clearly stated, until recent weeks, that it could never accept this. So this is where the real responsibility lies. Brexiteer intransigence.

So in addition to putting the blame where it should lie, the UK’s corporate media would do much better to reflect the changing opinion of the British people.