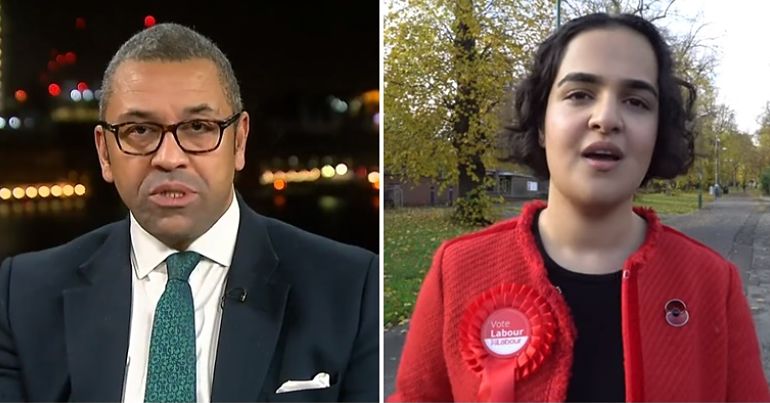 On 15 January, Conservative Party chair James Cleverly told ITV’s Robert Peston that Britain isn’t becoming more racist and it’s an “infinitely, infinitely more open and tolerant country” than when he was growing up. Cleverly insisted that back then there was “casual racism” on the TV and in society.

“Racism is on the rise”

But Labour MP Nadia Whittome, who was a hate crime worker in Nottingham, hit back at Cleverly’s comment. Whittome said it’s simply “not the case”. She said during her time in that role:

we saw the second biggest rise in hate crime after Brexit

She feels “racism is on the rise, and it’s being fuelled by people in positions of power”. Whittome was referring to people like Boris Johnson and his atrocious record on racism, and Nigel Farage for the anti-refugee position he maintained during the Brexit referendum.

Whittome also attacked the idea that Johnson has a “diverse cabinet”. She said:

All that tells children of colour is, if you’re willing to preside over the hostile environment, you too can be like Priti Patel.

And with Home Office statistics showing a rise in hate crime in England and Wales, it’s difficult to understand what Cleverly based his assertion on. As recently as December 2019, Cleverly had to apologise for racism and Islamophobia within his own party.

When Peston interviewed Cleverly, he put it to him:

But it’s getting worse again though isn’t it, you must agree because so many people are saying they’re experiencing it?

To which Cleverly immediately replied:

No I don’t actually agree that it’s getting worse.

Cleverly continued by attempting to blame social media. He said:

Because of social media, when problems – and unfortunately [there’s] always going to be problems – but they get more exposure.

Yet, Cleverly’s party has a very clear problem with racism. And it’s not confined to Boris Johnson’s racist remarks. The Tory’s sad record on dealing with Islamophobia highlights this. But it still refuses to fully investigate Islamophobia within its own party.

From education and employment to the criminal justice system, structural racism is very much at the heart of Britain’s treatment of ethnic minorities.

And it’s within education where some problems lie. Lais stated that while some believe education has “inoculated us against colour bias” it has also helped to sanitise “Britain’s bloody past”. Furthermore, a Guardian survey in 2018 on bias in Britain revealed a lot about the treatment of Black and minority ethnic (BAME) people. It showed:

38% have been wrongly suspected of shoplifting in the past five years, compared with 14% of white people.

Additionally, 43% of BAME people felt overlooked when they applied for a job or a promotion. This isn’t the only issue with racism in the UK. Black men are “eight or nine times more likely” to be stopped by police and institutionalised racism in policing is ongoing. Meanwhile, cuts to youth services have also impacted young Black people disproportionately.

If Cleverly still doesn’t believe it’s getting worse, he should also consult the Home Office. It published hate crime figures on 15 October 2019. It defines hate crime as:

any criminal offence which is perceived, by the victim or any other person, to be motivated by hostility or prejudice towards someone based on a personal characteristic.

there [have] been spikes in hate crime following certain events such as the EU Referendum and the terrorist attacks in 2017.

Thankfully not everybody believes this nonsense

While Cleverly’s denial is unacceptable, it’s heartening to see not all British people think like this. And they’re doing something constructive to educate people about racism’s origins. Young people in London put together and distributed 5,000 copies of their own newspaper to educate British people about the UK’s colonial past and it’s “ongoing legacy”.

The influential grime artist Stormzy has also been very vocal on the true extent of racism in the UK.

The Conservative’s have a majority government. Meanwhile, the BBC seems to be supporting that majority through audience participation in some political discussion. But it’s important we highlight the truth about race relations in Britain. It’s even more important that we tackle racism. And part of that process involves tackling those who play it down or outright ignore it.