When senior Tories want to 'uphold human rights in our way', you know it’s time to make a stand - The Canary 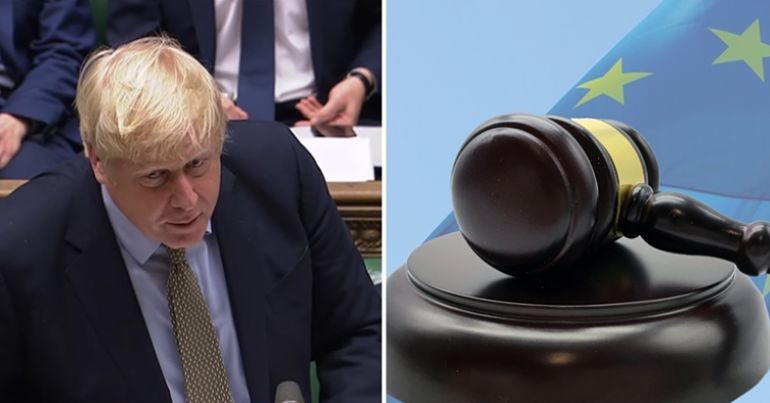 The UK remains in the EU customs union and single market until 31 December 2020. This is when the transition period ends. After that date the UK will no longer have to follow EU rules. However, it doesn’t follow that the UK would also leave the European Convention on Human Rights (ECHR). But that’s exactly what senior Conservative Party figures seem to be proposing once again.

The EU and the ECHR

The EU is demanding the UK continues to be bound by the ECHR once the current transition period ends. But one newspaper reported that not only will UK negotiators reject this, but senior Conservative frontbenchers have even said the ECHR was “abused” by European judges. This was in part because the European Court of Human Rights ruled that some prisoners had the right to vote.

Instead, British officials wish to “uphold human rights in our way”. But EU negotiators are insisting upon it remaining in place. Otherwise it could seriously affect the UK’s relationship with the EU from 1 January 2021 onward as law enforcement cooperation would be “automatically terminated”. So the EU wants the UK to stick to the ECHR.

The UK and the ECHR

Whether the ECHR should or shouldn’t be included in trade talks is one thing. What is more pertinent is the desire of senior Conservatives to be rid of a convention that protects human rights. Former prime minister Theresa May called for the UK to leave the ECHR rather than leave the EU before the Brexit referendum in June 2016.

The ECHR is not connected to EU membership. It’s an international human rights treaty between the 47 states in the Council of Europe. The UK is one of these states. So, it’s not related to Brexit. The UK voted to leave the EU in June 2016, but it didn’t vote to leave the ECHR.

But even more important than the UK’s relationship with the EU are the rights it has helped to enshrine in British law. Because the ECHR has enshrined protection of ‘human rights and fundamental freedoms’ since it came into force in the UK in 1953. This was 20 years before the UK joined the EEC (now called the EU).

And the ECHR protects people in the UK courts through the Human Rights Act 1998 (HRA). This is the Act which brought the ECHR into UK law.

The ECHR is wide ranging in the protection it offers to people living in the 47 states. Among many other protections, it protects the right to life, prohibits torture, slavery and forced labour, and guarantees the right to a fair trial and freedom of expression.

And in the time it has been in place, it has offered much needed protection to minority groups. The Conservatives would effectively criminalise, arrest, and force Gypsy, Roma and Traveller communities into homelessness should their election manifesto become reality.

The ECHR has made a significant impact on human rights in the north of Ireland also. Under the Good Friday Agreement the British government incorporated the ECHR into law in the north. Article two of the ECHR protects everyone’s right to life. And this article could help the Finucane family finally get justice for murdered human rights solicitor Pat Finucane.

So any change to the ECHR could negatively affect these rights and the relationship with devolved governments in the UK.

What  do the Tories want?

Leading Conservatives have wanted to replace the ECHR for some time. This was interrupted by their coalition with the Lib Dems between 2010 and 2015. Then their attempts were further frustrated by the result of the Brexit referendum 2016 and the Tory-led chaos that followed.

Now that all that’s behind them, for the time being at least, they seem intent on “coming for the ECHR”. In fact, its 2019 election manifesto promised to:

update the Human Rights Act and administrative law to ensure that there is a proper balance between the rights of individuals, our vital national security and effective government

This part of the manifesto was seen as a “sinister threat” to the ECHR.

Time to be active

If people value the human rights protection they have in the UK, then it’s time to get active. Any government that would attack human rights legislation in this way simply can’t be trusted to ensure any changes will equally protect people’s rights. The next ten months of the Brexit transition period are sure to be turbulent given that so much needs to be agreed in such a short time.

But regardless of any free trade deals that may or may not be agreed during that time, we must not lose sight of what’s most important.