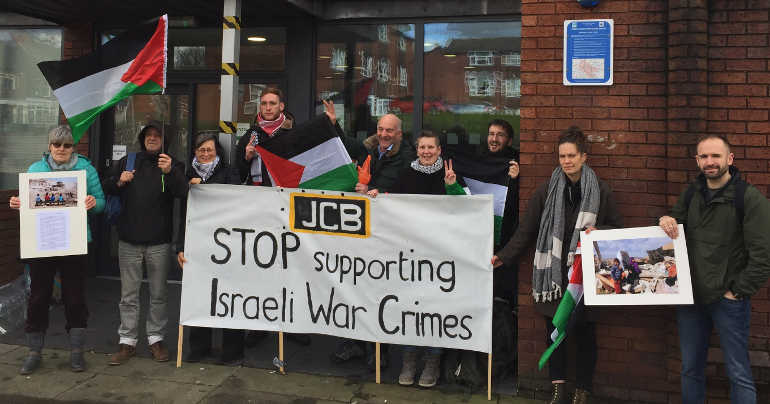 Disclosure: The author of this piece is also a researcher for Corporate Occupation, whose work this article cites.

Our research found that 6,784 Palestinian olive and fruit trees were uprooted by JCB equipment in 2019 #Stopthedemolitions #BDS @BDSmovement pic.twitter.com/xisL2U9KD4

The Canary contacted JCB for comment but received no reply at the time of publication.

For more than a year, activists and lawyers have been campaigning for JCB to prevent its machines being used in Israeli war crimes. The Bamford family, which owns JCB, has repeatedly ignored all attempts to engage with them. The Bamfords, with an estimated wealth of £3.6bn, are also significant Tory party donors.

Since 2001, Electoral Commission records show the Bamford family and JCB have given “almost £10m in political donations”, primarily to the Conservative Party and groups “campaigning to leave” the EU.

Activists have taken direct action against the company. In March 2019, protesters laid in the road, connecting themselves to each other with concrete tubes, and blocked transport coming in and out of JCB’s World Logistics headquarters.

The trial against the four activists collapsed this week. In a press statement, the campaigners stated that:

On no less than four occasions, the Crown prosecution had either changed the charge or had been ordered by the court to define the charge properly.

The prosecution offered no evidence against the defendants, and the case was dismissed, with costs awarded to all four protesters.

Outside court, Natalie, a campaigner for Stop The Demolitions, stated that:

The campaign against JCB will continue and intensify, as the evidence is that JCB’s Directors currently have no regard for the lives of Palestinians facing the daily threat of destruction of their homes, their olive groves and their communities.

In December 2019, Lawyers for Palestinian Human Rights made a human rights complaint against JCB over the company’s involvement in illegal settlement construction and home demolitions.

And in February, the UN named JCB on its long-awaited list of businesses involved in settlements. Comasco, JCB’s exclusive distributor in Israel, was also named. For more than a year, the Israeli state desperately tried to prevent the publication of the list, and was furious when it was finally published.

It’s time that JCB engages with campaigners about its complicity in Israeli war crimes, puts people before profit, and stops supplying the Israeli state with bulldozers.

Featured image via Stop The Demolitions