Amid the crisis, let's name and shame the companies treating workers 'like rats' - The Canary 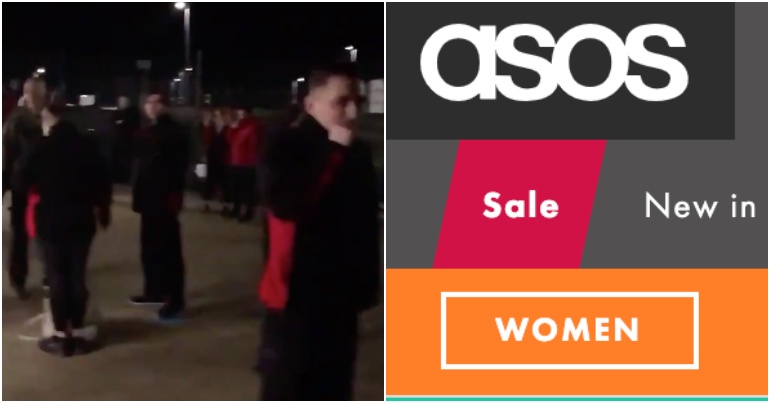 The coronavirus pandemic has revealed both the best and worst of people. Communities around the UK are helping each other via mutual aid groups. Many small businesses are doing their best to support people through the lockdown. Meanwhile, some large companies have redefined the very definition of disaster capitalism. In their chase for profit, they’re putting workers at risk, and one stands accused of treating employees “like rats”.

The GMB union sent a survey to people working at Asos. In a press release, it said, that “98%” of those who responded “feel unsafe at work” during the coronavirus crisis. According to GMB:

Terrified Asos workers say they feel ‘like rats’ in a warehouse they have branded a ‘cradle of disease’.

Asos “ramped up” operations in its Barnsley factory. This is:

now processing orders from the company’s German warehouse – which has closed – and hundreds of extra staff have been drafted in to deal with the million online orders Asos received over the weekend.

Workers report no social distancing measures, a complicated clocking in system which means large numbers of people gather in a small area, and hundreds of workers all breaking for lunch at the same time.

In 2019, its owner Anders Holch Povlsen had an estimated wealth of “£6.1bn and is Scotland’s biggest private landowner”.

“We gonna die there”

GMB shared responses to the survey. One person asked:

I am with high risk so if something happens to me, they will look the other way because I am not important enough. Who is going to raise my 1-year-old son?

Another questioned the impossible choices they face:

It is an infectious centre, you can get the COVID at any given time. Why am I still there? I can’t live on 94 pounds per week. I cannot help my family with that. It sounds stupid but making money to live is more important than being healthy right now.

Others pointed to the lack of social distancing, cleaning of shared areas, and sanitiser. One person said it’s “not safe at all, I am scared to go”. Aisles are reportedly “less than 2m wide” and workers constantly “pass face to face” with each other. There are fears that if one worker contracts coronavirus it will pass to everyone.

@ASOS_NickB Hi
I am a worker at Asos Barnsley. I am telling you me and my colleagues we are really afraid to go to work, it is impossible to keep a safe distance inside the warehouse
They told us his not aloud to wear mask because his not part of our uniform .We gonna die there

I am an employee at @ASOS I can tell you there is little safety precautions. It is impossible to have a safe distance as well as doing your job hitting the targets. All I want is to keep myself safe and my family. It’s non essential work I’m scared. London staff are protected 😢

A video emerged that appears to show the lack of social distancing for workers leaving the Asos factory:

Got some very alarming footage from non-essential fashion warehouse ASOS tonight.. How the hell is this following government advice and protecting the NHS? Utterly shameful!! 😡 pic.twitter.com/JQgF8mdkly

“They need to shut it down”

workers we’ve spoken to describe it as a ‘cradle of disease’. It’s absolutely horrifying, a real catalogue of shame.

Roache also fears the situation may only “get worse” after Asos ran a “huge sale” at the weekend. He continued:

The Government’s scheme for furloughed workers is there to support employers to do the right thing and keep people safe. ASOS can more than afford to pay the extra 20% to help stop the spread.

We no longer believe Asos can keep their workplace safe – they need to shut it down.

Concerning to hear reports from workers that the @ASOS warehouse in Barnsley was visited by three ambulances yesterday.@GMB_Union are right to say: this can't go on.

ASOS bosses must make their workplace safe – or shut up shop.https://t.co/0ZPfebp9QO

Others, meanwhile, called for a boycott of Asos and other companies putting workers at risk for profit:

If you (like me) are being bombarded by notifications about online sales from major chains like ASOS, GAP etc please please please don’t buy during this time. There is a human being at the other end of this, who shouldn’t be working in a warehouse. The clothes can wait.

Sadly, Asos isn’t the only company putting people at risk. The Range exploited a loophole and installed freezers in stores, meaning it could remain open through the crisis. According to an online petition, it refused to sign up to the government offer to pay 80% of workers’ wages and is forcing them to work without proper protection:

My mum has COPD and emphysema which is classed as high risk from the virus but @TheRangeUK expect her to work even though the government are advising her to isolate for 12weeks. They are now refusing to pay her anything at all

@TheRangeUK is it true that the range put freezers in their store so they could remain open as an essential store? Is it also true that the staff are being made to come in without gloves or masks? If so, that's some charles dickens shit.

Lewis Cotter started an online resource to highlight which UK companies he feels responded positively or shamefully to the pandemic.

For many people struggling to pay rent and buy food, shopping for clothes is an unaffordable luxury right now. But that doesn’t mean that workers should be exploited in life-threatening conditions to serve those who can afford to pay. When this crisis is over, we need to stand firm and boycott each and every company which chased profit through this pandemic.