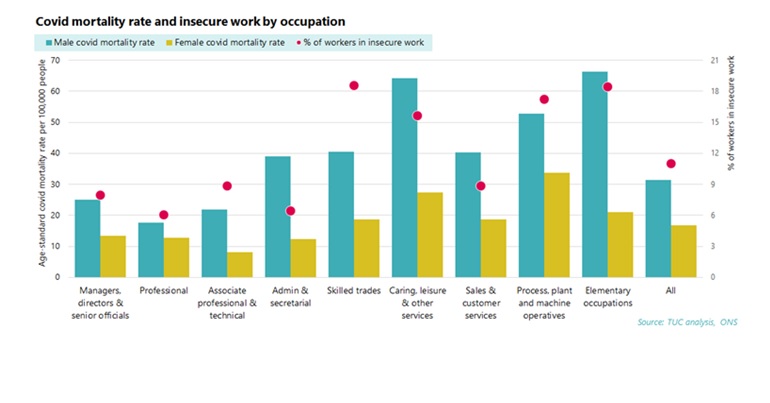 Insecure workers died of coronavirus (Covid-19) at twice the rate of people in other jobs. That’s the finding of new research into the pandemic. It’s shone a damning light not only into the government’s response but also the state of employment in the UK more broadly.

The Trades Union Congress (TUC) has researched how the pandemic impacted insecure workers. It says these are people whose:

contract does not guarantee regular hours or income (including zero-hours contracts, agency work and casual work) or… are in low-paid self-employment (earning less than the government’s National Living Wage). In total, this is one in nine in of those in work.

But as the TUC said, insecure work is not just people like app-based taxi drivers. It said that the following percentages of workers were in insecure jobs:

A lot of what the TUC found about the pandemic and insecure work was unsurprising. For example:

Care workers were particularly hard-hit. For example, the government put in place the Adult Social Care Infection Control Fund. It was worth over £1.1bn. The fund was for care companies. Part of it was to pay staff who had to stay off work due to coronavirus. But as the TUC wrote:

a UNISON survey of care workers revealed the money did not get through to workers, with more than two fifths (44%) saying their employer is offering just statutory sick pay (SSP) of £95.85. Around one in 12 (8%) workers say they and colleagues were not paid at all if they needed to stay at home.

Overall, the TUC also said marginalised communities bore the brunt of this.

It’s research found that the following percentages of people are in insecure work:

But it’s the death toll of coronavirus on insecure workers which is particularly shocking.

The TUC found that insecure workers were more likely to have died from coronavirus. It noted that the death rates were:

The TUC wouldn’t commit to why the rates were higher in insecure work. But it did note that:

many of these occupations include work outside the home and that many insecure workers lack decent sick pay.

In other words, people in insecure industries had no choice but to go to work in the middle of a global pandemic. Despite the risks, they could not afford to protect themselves and their families fully from coronavirus.

As the TUC summed up:

The pandemic has exposed the lack of dignity that many insecure workers face. Society relies on these workers to carry out vital roles such as caring for sick people and delivering vital food and other services. In return, a significant number of these workers will have no job or income security.

It says that three things need to change:

After such a devastating time for so many workers, you’d hope the government would listen. Whether it will or not remains to be seen.

Featured image via the TUC