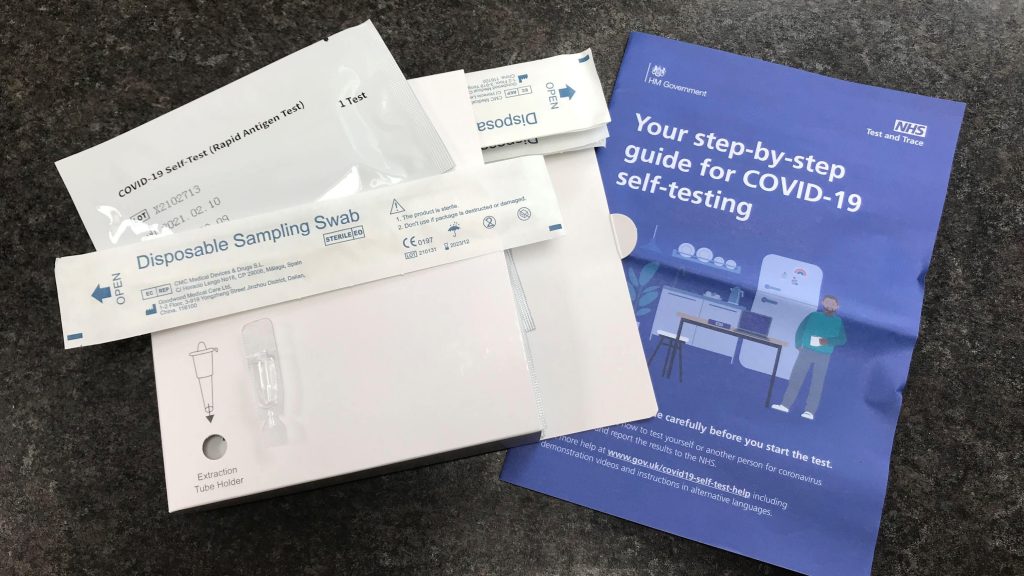 The government’s mass rollout of rapid result coronavirus tests is “dysfunctional” and “crazy”, an expert has said.

Dr Angela Raffle is honorary senior lecturer in community medicine at the University of Bristol Medical School. She’s argued the Test and Trace programme needs to be rebuilt to link with local health and social services. And she said that focus should be on where the risk is greatest.

Moreover, she warned that extensive use of lateral flow tests (which can return results in 30 minutes) when coronavirus prevalence was low was a waste of resources. And it could result in problems such as higher numbers of false positives. Raffle said the use of at-home rapid tests should be paused while more research information was collected through trials.

The Guardian said it had seen emails which showed senior officials were considering rolling back large-scale asymptomatic testing. This was due to the number of false positives. Commenting on the reports, Raffle, who is also a consultant to the UK National Screening Programmes, said:

That’s a phenomenon that anybody who knows about this stuff has been predicting will happen.

Once you start testing people who are at very low risk, then even a good test will throw up more false alarms than genuine positives

Raffle said adopting a “black and white” perspective on whether a test was good or bad was too narrow a view.

It all depends what’s your overall programme of testing? Who are you testing? Why? What information are you giving them?

How well is the test going to be conducted? How will you make sure they understand the result and the limitations of the result?

How will you support whatever action needs to happen next? How will you quality control the entire system? That seems to have been really lacking in the Government’s approach.

Lateral flow device (LFD) tests do not need laboratory assessment. And they form an integral part of the government’s mass testing programme. People in England can have two rapid coronavirus tests per week. Kits are available free of charge at approved testing sites, pharmacies, and by post.

Tests have been deployed across the country for health workers, businesses, schools, at asymptomatic testing sites, and for at-home testing for the families of school pupils.

The government has previously defended the accuracy of the tests. It said that analysis showed LFDs have a specificity of at least 99.9% when used to test in the community.

Raffle said she found it “beyond belief” that lateral flow tests had been rolled out across various settings “without some really solid evaluation being done months and months ago to say… what really happens in a true life setting?”.

The idea that we should be making tests available to the general population to use themselves when we have no data at all on how well they perform when done by people who aren’t trained, to me it’s just crazy.

They didn’t say test millions of low-risk people with a test that you haven’t evaluated in that context.

She pointed to a recent analysis of a rapid-result tests pilot in care homes in Liverpool. It found “poor” adherence and no impact on outbreaks.

Downing Street defended the use of lateral flow tests. A No 10 spokesperson told reporters on 16 April:

Lateral flow tests have been rigorously evaluated and we believe that they are both accurate and incredibly useful in terms of being able to spot asymptomatic cases of the virus.

We know now this can be one in three people and it therefore allows us to identify possible contacts of those people and ultimately helps us to reduce the spread and the transmission of the virus.

Asked how she would characterise the government’s approach to the systems for delivering mass testing, Raffle said:

I would really say insane.

She listed a number of issues with the current approach. They include creating the temptation for people with symptoms to do a rapid test at home, which could be administered incorrectly. And there’s a lack of information on how well such tests are performed in the hands of ordinary people. The tests would be “useless” if the right subsequent actions weren’t followed, she added.

Raffle argued that while Test and Trace was “improving” it should be transformed to establish clear objectives. She said standards and measures should be achieved and published for each measure.

Some 4m LFD tests for coronavirus, or rapid tests, were conducted in England in the week up to 7 April, according to the latest Test and Trace figures.