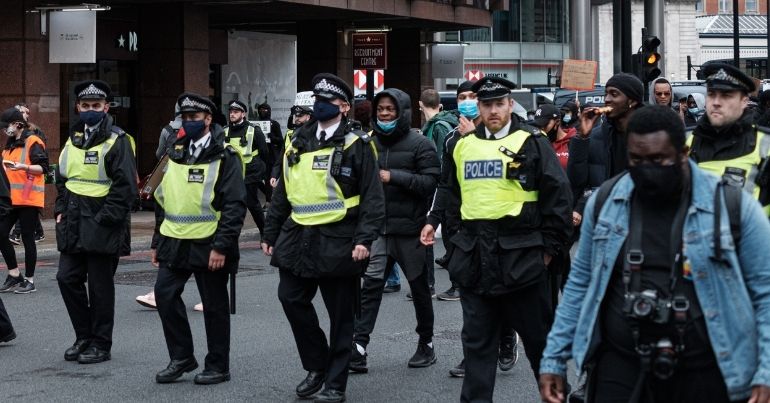 The government expanded police powers to allow for “unprecedented restrictions on social gatherings” in the wake of the coronavirus pandemic in 2020.’ The report, titled A threat to public safety: policing, racism and the Covid-19 pandemic, was authored by academics from the University of Manchester’s Centre on the Dynamics of Ethnicity (CoDE). It argues that lockdown conditions, new police powers, and histories of institutionally racist policing have combined to threaten marginalised and vulnerable communities that already experience over-policing.

Moreover, it highlights that although England saw a drop in crime rates during the first lockdown, stop and search rates more than doubled in May 2020 compared to the year before. Also, between April and June 2020, the use of force increased by 12.5%. And police disproportionately used force against Black people.

It’s almost giving like a golden ticket to kind of go out there in Black communities and just ridicule us. You know? To me, there’s like something that triggers the police with Black people […] they manhandle us, they verbally attack us, they treat us like animals

The findings dismantle the myth that the police contribute to public safety. Instead, they demonstrate how policing such a ‘crisis’ has reproduced profound harms for those from racially minoritised groups and communities.

Participants sharing their experiences of policing during the pandemic highlighted instances of police failing to use personal protective equipment (PPE) or observe social distancing regulations. One woman who was heavily pregnant during an encounter with police told researchers that officers refused to wear masks when she asked them to.

The report comes in the wake of widespread protests against institutionally racist policing and proposals set out in the government’s draconian Police, Crime, Sentencing and Courts bill. Reflecting on the policing of the 2020 Black Lives Matter protests and 2021 Kill the Bill protests, another respondent said:

it’s just completely illogical that for them, a public health response involves sending like 40 to 100 police officers into an area, kettling people, using PAVA spray and then putting loads of people in police stations and in custody where obviously the risk of transmission is going to be higher…So, it’s just so obvious to us, this has got nothing to do with public health. This is just about the police being able to shut down protests.

The report argues that such practices “completely undermine the public health approach to the pandemic”. During encounters with the public, the police significantly increased the risk of coronavirus transmission.

Dr Remi Joseph-Salisbury, one of the report’s authors, said:

The evidence in this report really urges us to question the State’s reliance on the police to solve social and public health problems. Despite being central to the government’s handling of the pandemic, policing too often threatens rather than protects public safety, particularly for people of colour.

This research gives a voice to those who have had uncivil, discriminatory or brutal encounters with the police and points to the dangers that the public health model poses for “policing by consent”. The evidence of the over-policed reveals that those who argue that mistrust of the police is based on hearsay, myth-making and a victim mentality, are hopelessly out of touch.

The report’s authors conclude by expressing concern that the draconian measures ushered in at the beginning of the pandemic will remain in place, giving rise to “longer-standing forms of State control”. This is exemplified by the proposed draconian Police, Crime, Sentencing and Courts bill. The bill would further expand police powers and threaten citizens’ civil liberties. The authors argue that our hope for dealing with present and future crises lies in alternative approaches which do not centre policing.