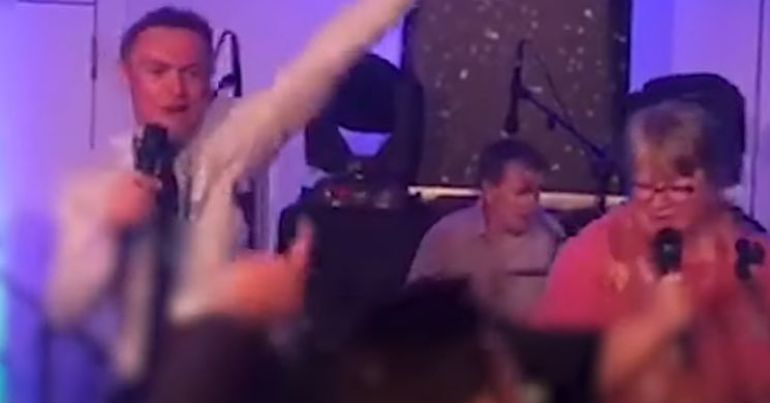 As the 2021 Conservative Party conference drew to a close, it coincided with rocketing gas prices and a notable rise in food prices and petrol prices. As always, it will be the poor who suffer the most. And it was during the conference that a £1,040 cut from Universal Credit payments, affecting millions of people on benefits or low income, took place.

Despite this levelling down, the Tories were in a celebratory mood at the conference. Indeed, perhaps the most defining image of the conference was of secretary of state for work and pensions Thérèse Coffey wildly dancing with other Tories to the song Time Of My Life.

Therese Coffey singing ‘I’ve had the time of my life’ at the #CPC21 just as the benefits cut comes into force is a new low; the footage a reminder the the Tory Party is a culture free ideological crack den of unsurpassed grimness and vacuity. #ToryBritain pic.twitter.com/RDjCXXHKAP

One example of levelling down is the government’s institutionalising of poverty by persuading the public that foodbanks are a good thing. Or to put it another way, they’re a ‘normal’ part of society:

WHEN did British people NORMALISE having food banks in what is a developed country?

WHAT IS WRONG WITH THE BRITISH PEOPLE that they think this is somehow OK?

Nor is it certain that the foodbanks will be in a position to support everyone in need this winter. So perhaps it’s not unsurprising that former Finland prime minister Alexander Stubb is proposing the EU provide aid to the UK in its hour of need:

If the EU would play its cards right, it would offer assistance to the UK now or later when the supply of basic goods and services takes a turn for the worse. This is what friends do, even if the pain has been self-inflicted, stupid an unnecessary. 1/3

Even the pro-Tory and pro-Brexit Telegraph reported on the proposal.

Moreover, come next spring increased gas prices could mean an annual bill of £1,660 for gas and electricity for the average home. And food prices could increase by 5%. According to the Royal Automobile Club, a tank of fuel costs approximately £12 more than last year. For many families these increases – coupled with the £20 reduction per week in Universal Credit – are unaffordable. And in reality they may mean freezing cold homes or malnutrition.

Once price rises take their toll and the Universal Credit cut begins to bite, we may be heading for far more than a 2021 version of a ‘winter of discontent‘,

Overall numbers *much* smaller than adults, but kids are facing one of their worst periods of the pandemic for cases and admissions. pic.twitter.com/vkfYBlcn1A

No doubt this is mostly thanks to the government’s easing of mitigation restrictions in schools. Though a few simple steps are needed to change that:

“Stay safe” is a pretty meaningless instruction to give pupils in schools on covid if there’s no isolation of contacts and no masking in crowded poorly ventilated rooms. Hand gel won't do it alone!

LONG THREAD on masks. Mute if not interested.
Do masks work? Why do some people claim they don’t work? Do they cause harm? What kinds of masks should we wear? How does masking need to change now we know that Covid is airborne? When can we stop wearing them?
Get your popcorn.
1/

And just when you think that the Personal Protective Equipment (PPE) corruption scandal has evaporated, another alleged example has come to light:

But it’s not just PPE.

The recently released Pandora Papers have shone a light on money laundering. And The Canary had previously revealed how British peers were implicated in money laundering from Russia-based oligarchs. Also, we reported on how the Conservative Party was a recipient of several donations from oligarchs.

Johnson says "it was the private sector" that developed the Covid vaccine. "It was capitalism that ensured we had a vaccine".

However, Johnson also neglected to mention that the Pfizer vaccine was developed in state-funded labs in Germany. And he further neglected to refer to the shockingly high number of coronavirus deaths in the UK:

Johnson claiming credit for the vaccine roll out which was the NHS but never mention the 138000 deaths, and that Britain has the highest daily death rate and covid infections in Europe

Or perhaps it’s much simpler than that: Labour MP Zara Sultana describes what’s going on as nothing less than “Class war”:

Today, a government led by an old Etonian, a Chancellor who's the richest MP, a Cabinet that's ⅔ privately educated, and whose party is funded by ⅓ of UK billionaires, will slash Universal Credit, robbing £1,040 from 6 million families.

Let's call this what it is: Class war.

But how can the Tory government face retribution from those who suffer the most from its destructive practices?

What is the punishment for the premeditated destruction of a country?
Asking for the UK

That’s the million dollar question. Though the answer to that may have nothing to do with a ballot box.