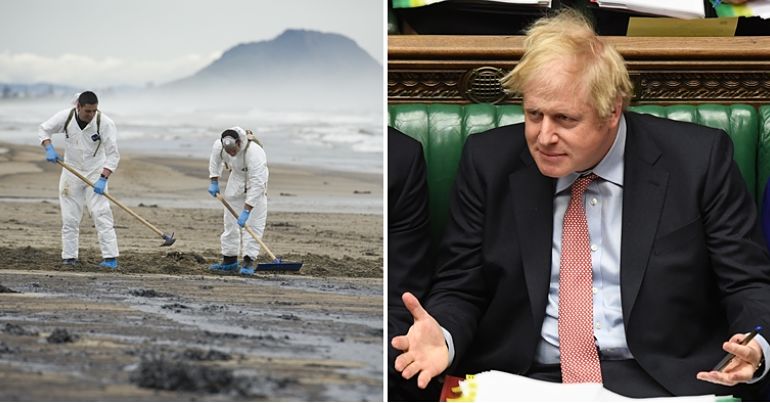 On 8 October, the UN Human Rights Council voted overwhelmingly to recognise “a clean, healthy and sustainable environment” as a human right. 43 of the 47 council members voted in favour of this non-legally binding resolution while four abstained. And while the UK was one of the 43, its support was a last-minute decision. Because just two days before the vote – as reported by The Canary – the UK opposed the resolution.

The UK was possibly embarrassed into this U-turn because it’s hosting the COP26 UN climate conference in Glasgow in November. Or maybe it feared the weight of contributing to “the biggest inter-generational human rights violation in history” by not acting in the face of a climate emergency. But then again, UK hypocrisy on the environment is less than surprising.

The Canary has extensively reported on how meaningless the UK’s environmental claims are. So with that in mind, the UK’s posturing on this resolution sums up its environmental position reasonably well.

Such hypocrisy is evident through the UK’s legal action against environmental protesters on the M25. These protesters want the government to properly insulate UK homes by 2030 in order to cut carbon emissions. Moreover, environmental activists against the building of the government’s high speed rail link HS2 have suffered constant abuse at the hands of police and HS2-related security officials.

This HS2 project has been called “the most expensive and destructive infrastructure project in Europe”. Anti-HS2 campaigners claim HS2 will be unlawfully evicting them from their protest camp on 10 October:

WAR Camp is currently under EVICTION

If you’re near Aylsbury please go support them if you can. A413 London Road, Wendover HP22 6PN

And it doesn’t end there. Because home secretary Priti Patel is planning a crackdown on climate change protesters. As reported by The Canary, this would be in addition to Patel’s plans under the Police, Crime, Sentencing and Courts bill to:

introduce a six-month custodial sentence, unlimited fines – or both – for obstructing a public highway.

The UK is an active polluter

But the hypocrisy doesn’t end with suppressing protest. The UK government is actively emitting carbon pollution under the guise of clean energy. As recently reported by The Canary’s Tracy Keeling:

Drax power station in North Yorkshire is the country’s biggest single source of CO2 emissions. Moreover, [thinktank Ember] claims that Drax is among the top three coal plant emitters in the whole of the EU [in 2020].

Despite all these issues, the UK government counts Drax’s bioenergy as a renewable – and therefore ‘clean’ – energy source.

Then off the coast of Scotland, the UK government – despite concerns raised by the Scottish government – could grant permission for drilling in the North Sea at the Cambo oil and gas field. Assuming it gets the go-ahead, Cambo could extract between 150 and 170 million barrels and it could operate until 2050. The Scottish Green Party claims:

The North Sea already has more oil than we can afford to burn if we are to meet the Paris climate commitments and secure our survival, so approving new fields would be a catastrophic decision by the UK Government.

And just over 30 miles north west of the COP26 conference lies the UK’s Trident “nuclear deterrent” at the Royal Navy’s Faslane base. That base currently houses at least eight nuclear-powered submarines. Anti-nuclear campaigners have warned that this “deterrent” could be as detrimental as “800 Hiroshimas”.

Supporters of this resolution claim that in 2010, a similar resolution on the right to water and sanitation encouraged Tunisia to adapt it into its law. Additionally, lawyers say the resolution will help “shape norms” and support arguments in climate cases. But while the UK did eventually support the resolution, it still remains outside the 100 nations granting constitutional recognition to a healthy environment.

Given the climate emergency and the UK’s hosting of a UN climate conference, its flip-flopping on this resolution is certainly hypocritical. But what’s even more troubling is its record on environmental protest and support for the oil and gas industry.

The UK is attempting to criminalise peaceful climate protests and is consistently hostile towards our environment. An environment that’s on the brink of collapse. If the Tories were really sincere about protecting it, their actions would have reflected this by now.