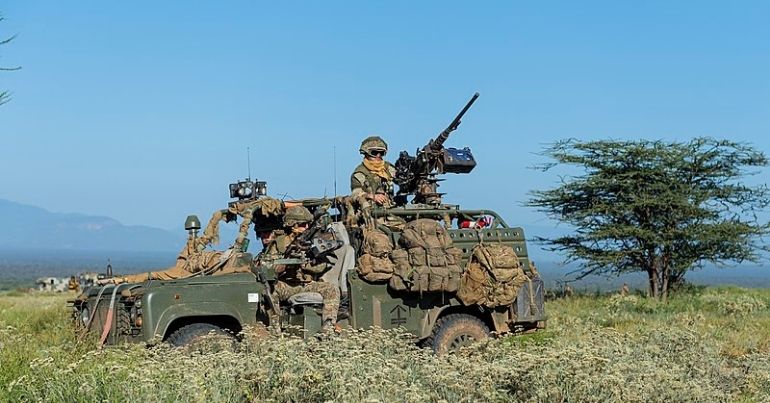 UK military ‘assistance’ programmes in the global south run the risk of destabilising already volatile regions and arming dangerous groups. A report by the NGO Saferworld warned that these small-scale deployments could end up doing more harm than good.

The report, titled Playing with matches? UK security assistance and its conflict risks, is wide-ranging. It’s focuses include human rights abuses and the arming of potentially dangerous groups.

A briefing attached to the report explains:

The UK is increasingly providing training and equipment to support other security forces to do the bulk of frontline fighting, policing and containment of perceived threats abroad. From training the Somali military to providing heavy machine guns to Kurdish forces fighting Islamic State, UK personnel and either gifted or commercially sold military equipment can be found across the world.

The training in the report often appears to be tactical military training and the equipment “gifted” varies from helmets and body armour to small arms and vehicles. For example:

Between 2016 and 2018, the UK gifted vehicle or body armour to Jordan, Libya, Somalia and Lebanon.

Additionally, heavy weapons were given to some groups, such as 40 machine guns to the Kurdish Peshmerga.

Saferworld acknowledge that a lot of training is “relatively routine” but they also say some involves “risks of causing harm”:

For instance, forces that the UK trains or arms may harm civilians or may use that support to pursue agendas at odds with UK interests. Arms provided by the UK may even end up in the hands of unauthorised recipients. These risks are arguably heightened when training or equipment is provided within fragile or conflict-affected countries.

The 60-page document warns that UK sniper rifles may have been diverted to Russian special forces and Syrian armed groups.

The report also documents allegations that UK-trained or -supplied security forces in Somaliland and Nigeria killed protestors. On the training of Egyptian forces by UK personnel, the report warns that the assistance is more political than practical.

However, the joint exercises may confer legitimacy on the military regime as a partner of the UK, by reinforcing an image within Egypt of the military as the most competent actor within society compared to civilian institutions

Too often, it is also alleged that UK government officials and politicians have ‘looked the other way’, failed to report evidence of malpractice or have done their best to cover up substantial wrongdoing.

While large deployments like Iraq and Afghanistan seem to be off the table, these small-scale programs of military intervention also involve risks. And if this is the form UK military action now takes, it needs to be accountable and transparent.