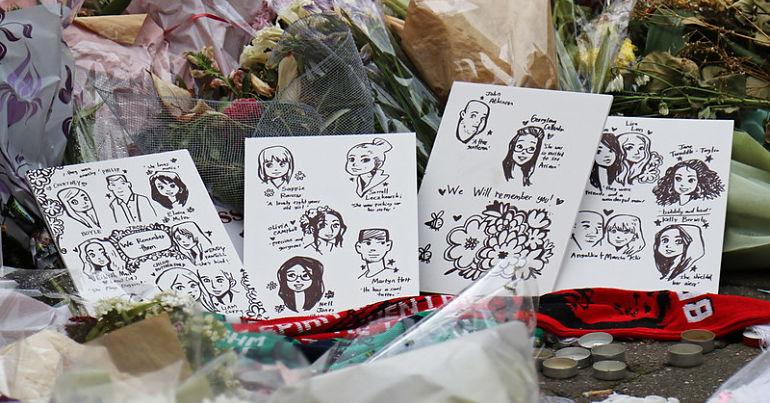 On 22 May 2017, suicide bomber Salman Abedi detonated his explosives at the Manchester Arena. Altogether 22 people died and hundreds more were injured. On 17 March 2020, Salman’s brother Hashem was convicted for his part in the atrocity.

On 25 October 2021, an MI5 director admitted to a series of intelligence failures in the lead-up to the tragedy. A draft copy of his testimony to the official inquiry into the bombing is now available. Testimony also shows that MI5 seemingly acknowledges the existence of documents, previously reported by The Canary, that showed MI6 had engaged with Libyan jihadists some years before the bombing.

The draft transcript of the testimony shows that witness ‘J’ was, over a 30 year period with MI5, a director of a number of branches, including “acting director-general of strategy” and is “shortly to be director in the counter-terrorism business”.

Witness J also stated that he was at the inquiry to provide evidence as a “representative of MI5” and “to deal with matters of context”. Also, his presence was “to explain MI5’s knowledge of and investigations into Salman Abedi in the period before 22 May 2017”. It was further explained that some of the evidence given by witness J was on behalf of witness ‘X’, who was unable to attend the inquiry.

Much of the testimony was about process, with witness J commenting in very general terms. However, when asked if Abedi was assessed to have been of “low or no risk” in July 2014, witness J answered unequivocally:

Witness J also told the inquiry that MI5 first received information about Abedi as far back as December 2010. This was because he shared an address “in some way” with a person who MI5 had requested a trace on. However, at the time he was not considered a threat to national security. But by March 2014 he’d become a Subject of Interest (SOI).

On 21 July 2014, Abedi’s SOI file was closed down. In October 2015, his file was re-opened, then closed again – both in one day. Between December 2013 and January 2017, Abedi was known to have been in contact with several other SOIs and “persons of an extremist mindset”.

At one stage in the questioning, witness J admits there had been a failure of intelligence regarding Abedi:

Q. On two separate occasions in the months prior to the [Arena] attack, was intelligence received by MI5 about Salman Abedi?
A. Yes.
Q. Was the significance of that intelligence not fully appreciated by MI5 at the time?
A. Yes, it wasn’t.
Q. At the time, what was it assessed to relate to?
A. At the time it was assessed to relate not to terrorism but to possible non-nefarious activity or to non-terrorist criminality on the part of Salman Abedi.
Q. But does MI5 accept that in retrospect, the intelligence can be seen to have been highly relevant to the planned attack?
A. Yes.

Indeed, DCS Dominic Scally, head of Counter Terrorism Policing North West, told the inquiry that during the period leading up to the bombing MI5 had failed to pass on intelligence.

Witness J was also asked if “an opportunity was missed by MI5 to place Salman Abedi on ports action following his travel to Libya in April 2017?”. He answered: “Yes, I think that would have been the better course of action based on the information we had at the time”.

Witness J was not questioned about the claim in Middle East Eye that the British operated an “open door” policy that “allowed Libyan exiles and British-Libyan citizens to join the 2011 uprising that toppled Muammar Gaddafi even though some had been subject to counter-terrorism control orders”.

When the revolution [against Muammar Gaddafi] started, things changed in Britain. Their way of speaking to me and treating me was different. They offered to give me benefits, even indefinite leave to remain or citizenship.

In 2011, British citizen Belal Younis was stopped and questioned on his return to the UK from Libya. He claimed he was told by an MI5 officer that “the British government have no problem with people fighting against Gaddafi”. On another trip to Libya he was again questioned, by two counter terrorism police officers. However, they allowed him to proceed after he gave them the name of the MI5 officer who previously questioned him. While waiting to board the plane, he claimed he received a phone call from that officer, saying he had “sorted it out”.

MI6 adventurism and the LIFG

Journalists Mark Curtis and Nafeez Ahmed claimed that the UK “covertly supported” the LIFG. They add:

Salman Abedi, then aged 16, is reported to have fought against the Qadafi regime with his father Ramadan in the uprising of 2011. The group that Salman Abedi joined, fighting alongside his father, was reportedly the LIFG. Ramadan Abedi is reported as having been a prominent member of the LIFG, which he joined in 1994

Curtis and Ahmed also argued that the Manchester bombing was “blowback” for UK foreign policy and intelligence operations in Libya. One such operation was described in a secret MI6 document, dated 4 December 1995. It was entitled “Plans to overthrow Qadahfi [Colonel Gaddafi] in early 1996 are well advanced” and leaked by former MI5 intelligence officer, David Shayler.

The coup was scheduled to start at around the time of the next General Peoples Congress on 14 February 1996. It would begin with attacks on a number of military and security installations including the military installation at TARHUNA. There would also be orchestrated civil unrest in Benghazi, Misratah and Tripoli. The coup plotters would launch a direct attack on QADAHFI and would either arrest him or kill him

The document states that it was made available to: the Permanent Under-Secretary’s Department, the Defence Intelligence Staff, the Cabinet Office, the Joint Intelligence Committee (JIC), GCHQ, the Security Service (MI5), and British authorities in Cairo, Tunis, and Washington. An annotated second document provides further explanation.

The main document refers to ‘Tunworth’, a jihadist in Libya who was provided with funds by MI6 to resource the plot.

Curtis and Ahmed commented how Tunworth:

proposed establishing links with the LIFG. Shayler asserts that he was told by an MI6 officer, David Watson, that in Christmas 1995 he, Watson, had supplied Tunworth with $40,000 to buy weapons to carry out the assassination plot and that similar sums were handed over at two further meetings.

The plot went ahead in February 1996 in Sirte, Qadafi’s home city, but a bomb was detonated under the wrong car. Six innocent bystanders were killed, and Qadafi escaped unscathed.

The 26 October testimony to the Manchester Arena bombing inquiry shows that witness J was asked:

The intelligence community [MI6] were engaged with the LIFG, knowledgable about the LIFG from the 1990s, weren’t they? It’s well documented in open source. There were resources from Shayler and (inaudible). But it’s clear that UK intelligence community was engaged with the issue of the Libyan Islamic fighting group from very early days, is that right?

He acknowledged: “There is some information in the public domain in relation to some of that, yes“.

The inquiry into the bombing has now moved into closed session to enable witnesses from MI5 and counter-terrorism to provide further testimony. But the sparsity of detail revealed by witness J so far does not bode well.

Also, it’s imperative that MI6 provide a detailed explanation of its dealings with the LIFG to the families of the victims of the Arena bombing, via the inquiry.