In January 2021, judge Vanessa Baraitser ruled that the US prosecution case against WikiLeaks founder Julian Assange was valid. However, she also ruled that Assange shouldn’t be extradited for health reasons and because there was a risk he could end his life.

The US subsequently presented assurances that Assange would not be mistreated. On 10 December 2021, the appeal court ruled that those assurances were acceptable and Assange could be extradited after all.

Lawyers representing Assange have issued a statement saying they will appeal to the Supreme Court regarding the assurances. They add that “other important questions”, for example free speech and political motivation, are yet to be heard by the appeal court: 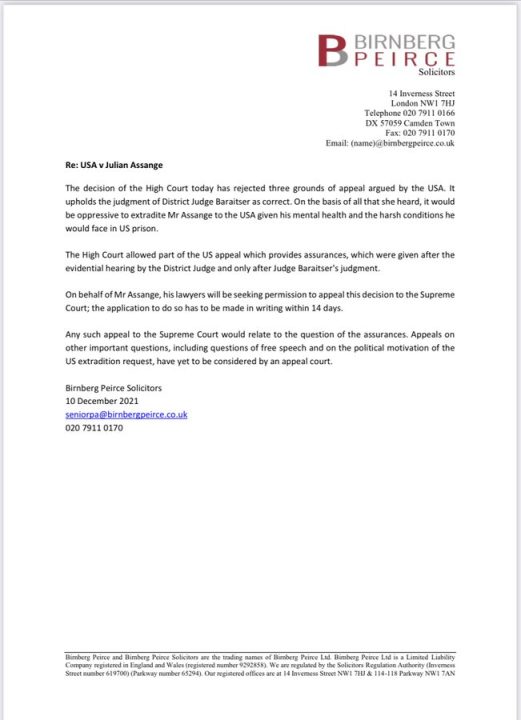 The appeal court ruled it accepted US assurances that Assange would not be held in the supermax facility in Florence, Colorado. It also accepted assurances that he would not be detained under special administrative measures (SAMS). These measures include segregation, no visits, and no phone calls. It additionally accepted an assurance that if convicted of charges raised, Assange could serve his sentence in Australia.

The prosecution listed several ‘assurances’ regarding the kind of prison regime Assange could face. Prosecution lawyer James Lewis claimed Assange would likely be detained in a Communications Management Unit (CMU).

However, journalists Kevin Gosztola and Mohamed Elmaazi explained that should Assange be detained in a CMU:

he would likely be limited to two scheduled 15-minute phone calls per week. Those calls could be restricted to immediate family, and the prison could deny him a call if an FBI agent was not available to monitor his conversation.

The visitation policy for a prisoner in a CMU is harsher than the policy for SAMs. Contact visits are not allowed, meaning Moris and his children, Gabriel and Max, would not be able to hug or kiss him.

In arguments presented to the court, the defence lawyers stated that if the US appeal is accepted, the courts should then consider the trustworthiness of US assurances.

On this point, former UK ambassador to Uzbekistan Craig Murray stated that the US has broken assurances about incarceration in the past:

BBC News cuts off former UK Ambassador Craig Murray as he explains why assurances given by the US are worthless, assurance Amnesty International have said are 'not worth the paper they are writtten on' #FreeAssangeNOW @BBCNews pic.twitter.com/L1kAeYmVH3

Journalist Richard Medhurst has referred to broken assurances given to Spanish citizen David Mendoza. As for Assange, he adds there is no guarantee that, if convicted, he could serve his sentence in Australia, “because Australia hasn’t said it would take him”:

As for raising “other important questions”, The Canary has previously pointed out that the defence may seek to appeal other aspects of the January ruling on matters of law. This could include an alleged agreement between Assange and whistleblower Chelsea Manning, for her to “obtain and disclose” information about war crimes, which Baraitser said “would amount to conspiracy”.

But journalism historian Mark Feldstein cogently argued in his witness statement to the court that:

The Canary further reported how in an alleged conversation between Assange and Manning, the latter asked for help in ‘cracking’ a password. However, Patrick Eller, formerly lead digital forensics examiner with the US Army’s Criminal Investigation Command in Virginia, pointed out that this was unnecessary, given that Manning:

already had legitimate access to all the databases from which she downloaded the data… Logging into another user account would not have provided her with more access than she already possessed.

Eller added that Manning had access to the Secret Internet Protocol Network (SIPRNet). When asked how many people would have access to SIPRNet, Eller answered “in the millions”.

There may also be other grounds for appeal.

In June 2019, it was revealed that star prosecution witness Sigurdur Thordarson was a convicted felon in relation to several offences, including paedophilia. In July 2021, it was further revealed by Stundin that Thordarson admitted he had lied to US authorities in exchange for a deal with the FBI.

Moreover, surveillance footage of Assange, while a guest of the Ecuadorian embassy, was allegedly passed to the CIA, breaching client-lawyer confidentiality.

There are also claims that the entire US case is political and therefore should be dismissed in accordance with provisions in the US-UK extradition treaty.

In January 2020, The Canary published a list of six legal arguments as to why Assange’s extradition should not proceed.

On 2 December, journalists Mark Curtis and Matt Kennard revealed that lord chief justice Ian Burnett, one of two judges who presided over the US appeal:

is a close personal friend of sir Alan Duncan, who as foreign minister arranged Assange’s eviction from the Ecuadorian embassy.

And it was previously revealed that the husband of Emma Arbuthnot, the presiding judge in the magistrates court hearings, has connections with defence bodies.

American Civil Liberties Union’s Ben Wizner has explained how Assange’s conviction could mean any country in the world can raise charges of espionage against any media outlet in the world:

The ACLU's @BenWizner: Assange decision "(sets) a precedent that will empower the worst authoritarian forces around the world" #FreeAssangeNOW pic.twitter.com/NAo9tGFQlv

Julian Assange's Fiancee Stella Moris: “This goes to the fundamentals of press freedom and democracy, we will fight – this is an abusive, vindictive prosecution" @stellamoris1 #FreeAssangeNOW pic.twitter.com/tWGJTjWavO

Assange, over the last fifteen years, has broken more major stories and done more consequential journalism than all the corporate journalists who hate him combined. He is not being imprisoned despite his pioneering journalism and dissent from the hegemony of the U.S. security state. He is imprisoned precisely because of that.

The case against Assange is flawed. Moreover, it’s increasingly clear that US ‘assurances’ are of no value.