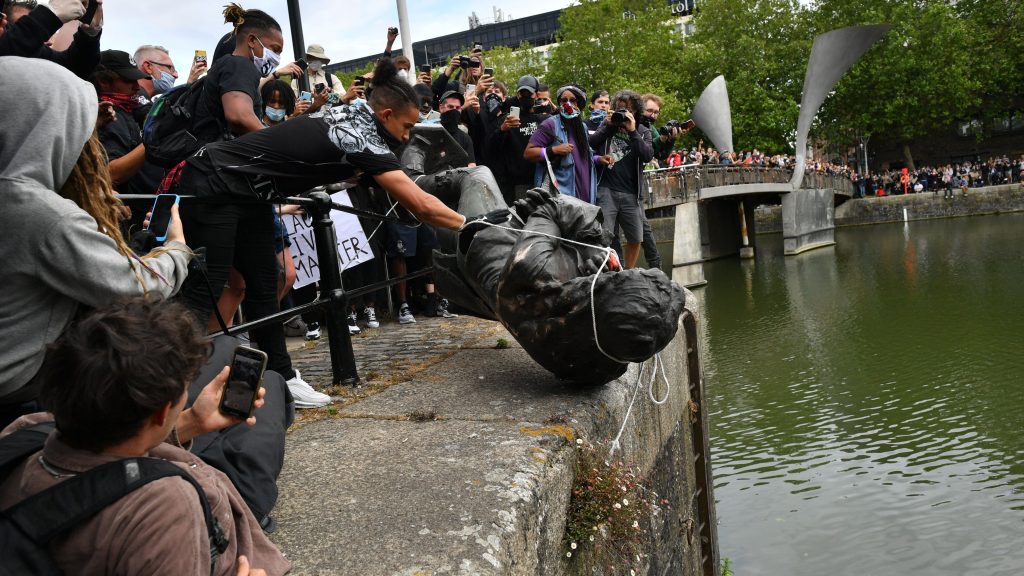 Street artist Banksy will be selling T-shirts to support four people facing trial accused of criminal damage in relation to the toppling of a statue of slave trader Edward Colston.

The anonymous artist posted on Instagram pictures of limited edition grey souvenir T-shirts. They’ll go on sale on 11 December in Bristol. The shirts have a picture of Colston’s empty plinth with a rope hanging off, with debris and a discarded sign nearby and ‘BRISTOL’ written above.

Banksy said proceeds from the sale will be given to the four people facing trial next week in Bristol for criminal damage. The topplers have previously been called “heroic”:

Heroic protesters in Bristol, England pulled down and flung into a river the bronze statue of Edward Colston, a prominent 17th Century slave trader.

His ships transported about 84,000 of our ancestors from Africa to the Americas, not counting thousands tossed into the Atlantic. pic.twitter.com/yVKpb4mG25

A gift from the Bristol-based artist

Next week the four people charged with pulling down Colston’s statue in Bristol are going on trial.

I’ve made some souvenir shirts to mark the occasion. Available from various outlets in the city from tomorrow. All proceeds to the defendants so they can go for a pint.

Bristol-based Banksy said sales would be limited to one per person and each T-shirt would cost £25 plus VAT.

The bronze memorial to the 17th century slave merchant was pulled down during a Black Lives Matter protest on 7 June 2020. It was then dumped in Bristol Harbour and later recovered by Bristol City Council.

Charges allege that the four defendants damaged the statue without lawful excuse, jointly and with others. The statue of the slave trader is a listed monument belonging to the city council.

The defendants are accused of committing the offence “intending to destroy or damage such property or being reckless as to whether such property would be destroyed or damaged”.

Despite the moral and ethical case for slavery being long-since settled, the statue of Colston remained standing until 2020. It’s unclear how long it would have remained standing if not for the intervention set to be put on trial.

The Canary has covered the saga of the statue toppling since it first went into the harbour. In June 2021, Eliza Egret wrote:

“The toppling of the statue came after years of campaigning and protests by Countering Colston and its supporters. The group had previously achieved a number of significant concessions, including the decision by Bristol Music Trust to change the name of the Colston Hall. And after the events in June 2020, a number of buildings and landmarks around Bristol named after the slave-trader finally bowed under pressure to change their names.

“Glad Colston’s Gone released a statement on the anniversary, saying:

We…support the anti-racist aims of the protests throughout the summer 2020. We abhor the legacies of institutional and structural racism arising from European colonisation and the trafficking, enslavement and transportation of African men, women and children into plantation slavery in the Caribbean and Americas.”