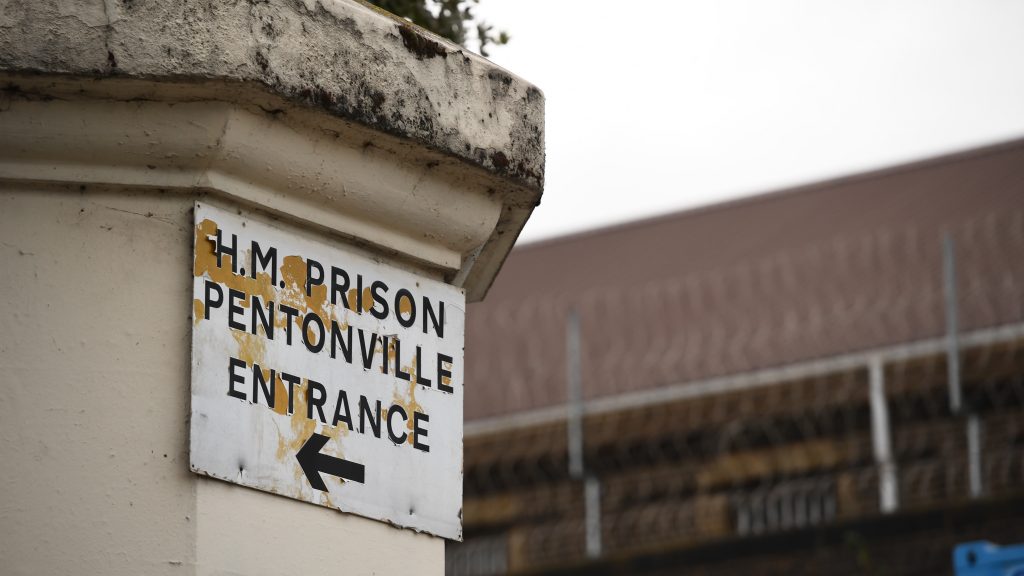 Violence fuelled by gangs, drugs, debt and “volatile young prisoners” has “increased markedly” at one of the country’s oldest and busiest jails, inspectors have warned.

Violence has shot up by more than 50% since 2017 at HMP Pentonville in north London, the Inspectorate of Prisons said on Wednesday.

Inspectors found the prison was unsafe and plans for activities, rehabilitation and release were not good enough.

In the last six months there have been 264 assaults on staff and inmates and 61 fights, compared with 196 and 65 respectively during a previous inspection.

The problems were “clear and serious” with the prison failing to meet “undoubtedly great challenges”, according to the watchdog’s report.

Chief Inspector of Prisons Peter Clarke said: “We left the prison with no illusions about the scale of the task ahead and with ongoing concerns about decency and safety for prisoners.

“The depressing cycle of promise and further decline cannot be allowed to continue.

“Managers appeared to be working together to bring about the changes that were needed.

“Indeed, many told us that within 12 months the prison would be vastly improved.

“We will test the reality of this claim through an independent review of progress (IRP), which will be followed in due course by a full unannounced inspection.”

There are around 33,000 “movements” through the category B prison’s reception every year – making it the busiest in the country, inspectors said.

Troublesome younger prisoners were being given “no targeted support” and a third of inmates told inspectors they felt unsafe, a report on the unannounced inspection carried out in April said.

Some 95% of inmates under the age of 22 said they usually spent less than two hours per day out of their cells during the week, compared with 59% of other prisoners.

Use of force by staff had “increased significantly”, yet oversight and accountability were “lacking”.

Drugs remained “hugely problematic”, with more than a quarter (29%) testing positive during a random drug test, the report said.

There were weaknesses in prison security and the use of technology to detect illicit items being smuggled in was “ineffective”.

Concerns were also raised about evidence of some “deep-rooted cultural problems that obstructed positive work with prisoners”, according to the inspectors.

Some support schemes for those in crisis were “poor”, and there had been four suicides since 2017.

Cells were overcrowded and badly equipped, making living conditions poor for many prisoners.

Clarke said he gave “very serious consideration” to issuing a warning notice – known as an Urgent Notification – which brings establishments with “significant failings” directly and publicly to the attention of the justice secretary.

But he decided the relatively new governor and his senior team “appeared finally to be getting to grips with longstanding problems”.

He added: “We found no denial of the gravity of the prison’s situation, and there was a clear recognition of the scale of the work to be done.”

Frances Crook, chief executive of the Howard League for Penal Reform, said: “Keeping men cooped up like battery hens in overcrowded cells with nothing to do is never going to help them to lead crime-free lives on release.”

The report reveals the “scale of the challenge” Boris Johnson has set for himself, she added.

Phil Copple, director-general for prisons at the Prison and Probation Service, said: “We are under no illusions as to the scale of the challenge at HMP Pentonville, but I share the inspectors’ confidence in this management team and fully expect to see real improvements.

“A new drugs strategy has been introduced at the prison to combine more cell searches with better addiction treatment, while a scanner to intercept illicit items in mail has been deployed.

“We are investing an extra £100m to boost security and safety across the estate to stop drugs, weapons and mobile phones getting in so we can protect staff, cut violence, and rehabilitate offenders.”