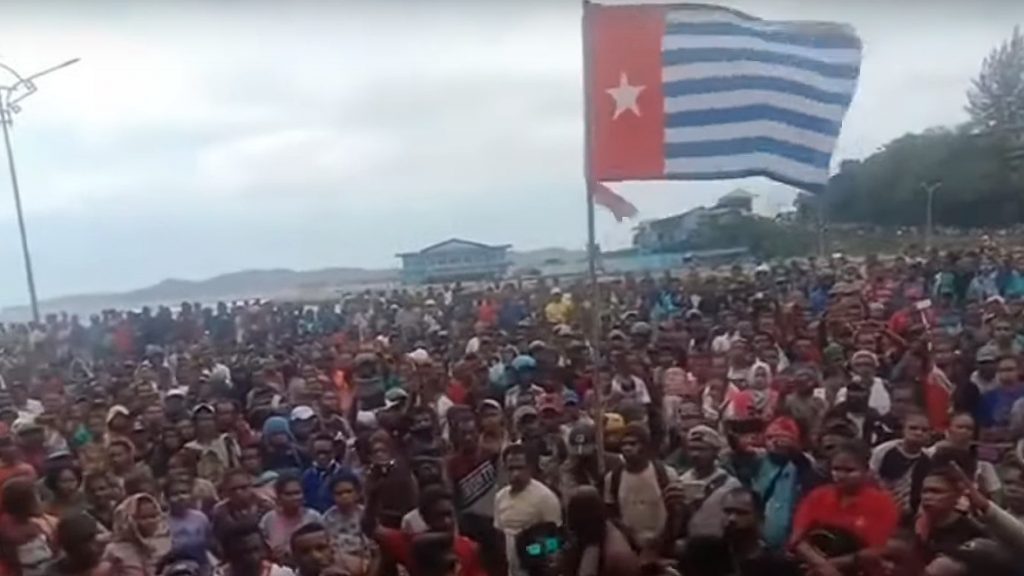 The most famous military occupation in the world today is probably Israel’s occupation of Palestine. But on the other side of the world, there’s another brutal occupation that gets far less media coverage. And with thousands of occupied people protesting to demand freedom in recent days, it’s time for progressives around the world to take notice and step up solidarity efforts.

Indonesia has occupied West Papua since 1963. In the ongoing conflict between the Indonesian army and the Free Papua Movement, over 500,000 civilians have died. Thousands more have reportedly been raped, tortured, and imprisoned. Evidence suggests that Indonesia has committed genocide.

On 19 August 2019, thousands of protesters took to the streets a day after Indonesian security forces arrested and insulted dozens of Papuan students in their dormitories in Surabaya, Indonesia’s second largest city. According to the Press Association, the students refused to answer questions over claims they had intentionally damaged the Indonesian flag in the dormitory’s yard. Police spokesperson Frans Barung Mangera said authorities had detained 43 students but released them hours later after finding no evidence that they had damaged the flag.

West Papuans rallying for their dignity in Jayapura today. “We are not monkeys!”
English subtitles provided. pic.twitter.com/T5B0O8aBeD

One key reason for West Papua’s occupation is its massive natural wealth. As The Canary previously reported:

In the 1960s, British, US, and Australian corporations carved up the region’s natural resources. Indonesia could then rely on the same countries’ support for its brutal, genocidal regime. This included the massacre of “at least half a million” left-wing Indonesians

In particular, oil giant BP has been accused of complicity with a “slow motion genocide” in exchange for “high speed profit”.

As the Australia West Papua Association explained in 1995, the Indonesian government’s ‘transmigration’ programme actively supported the emigration of people from elsewhere in Indonesia to West Papua. The aim was “assimilating indigenous people with the goal of forging a single national identity”. This caused “the large-scale displacement of the indigenous population from their traditional lands”. And as ABC reported earlier this year, the indigenous population has “halved” as a result. Activists have called this “cultural genocide”.

We Papuans are familiar with the poison of racism experienced daily at the hands of Indonesia. This is the dehumanisation that allows the Indonesian military to burn our houses in Nduga, that allows Indonesian intelligence to execute us on the spot, that allows Indigenous land to be grabbed for Indonesian ‘development’ projects.

If Indonesia can celebrate the victory of its Independence struggle against the Dutch, why can’t West Papuans celebrate that same spirit of anti-colonialism by calling for their own independence? Why is Indonesia, on the anniversary of its independence, displaying the very colours of imperialism and racism which the Europeans once directed against them?

Indonesia calls my people monkeys and tells them to ‘go home’. So now I am telling the President of Indonesia to give my people the freedom to go to their home without being killed, arrested, tortured, harassed and discriminated against.

Wenda, who chairs the United Liberation Movement for West Papua (ULMWP), also spoke about recent achievements. He pointed out that activists have successfully pushed for the Pacific Island Forum to “take a stand on West Papua”. He also mentioned protests on 17 August “against Indonesia’s colonial attempt to impose its national Independence Day upon us”. And he stressed:

In response to this peaceful outpouring, we have been met with arrests, beatings and abuse given out by the Indonesian colonisers…

On August 15, Indonesia arrested 158 people during demonstrations in support of the ULMWP’s operations at the Pacific Islands Forum. These demonstrations ranged across cities in West Papua and Indonesia itself. In Jayapura, a seven-year-old child was among the 76 people arrested. In Malang, five people were beaten and bloodied by the Indonesian security services.

Oppose all occupation. Support all self-determination.

Just as we firmly oppose the brutal occupation of places like Palestine and Kurdistan, we must also support the Papuan struggle for freedom. Because as long as oppression and injustice continue to reign in this world, none of us will truly be free.