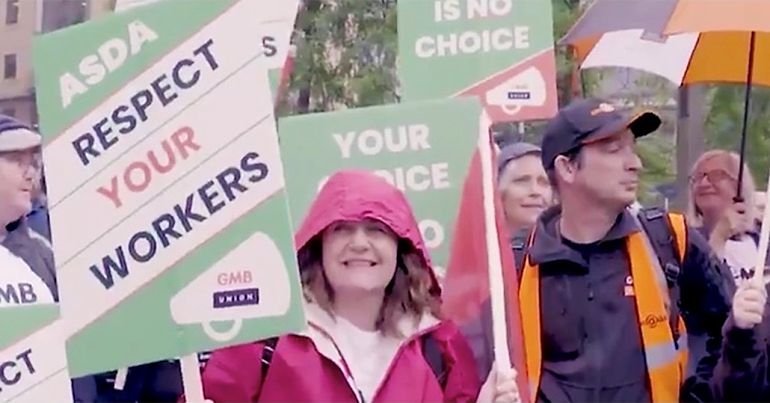 On 16 September, Asda workers across the UK will protest against a “brutal contract”. If they don’t sign, many face getting sacked before Christmas.

A press release from the GMB Union stated:

The company has told workers they must sign the so-called ‘flexible’ Contract 6 – which will see them lose all their paid breaks and forced to work bank holidays – or be sacked on November 2.

As Personnel Today reported in August, following similar protests, this contract increases worker pay “from £8.84 to £9 per hour”. But workers lose all unpaid breaks and must also work over bank holidays if required.

GMB also noted that Asda’s already “punishing” workers who’ve not yet signed this “controversial new contract”. The company told workers that they’ll “not be paid for any sick leave” until they sign.

Workers who have given years or loyal service are being told ‘sign this brutal contract or get the sack in time for Christmas’.

By forcing people to sign this contract, Asda are making people choose between their families or their jobs.

Protests are taking place across the UK:

Called at Asda Trafford Park this morning to show support for staff being forced to sign up to reduced terms and conditions. Asda shoppers please tell Asda to think again @GMBTrafford #ASDARespectYourWorkershttps://t.co/0LAvzY8YJk pic.twitter.com/KIZJMkNHYH

In a GMB video release to support the action, Labour’s Richard Burgon asked:

Isn’t it wrong that people who create the profits for the very rich people who own Asda, have to come… to demand and ask that the company that they’ve made a success over all these years actually listens to them and talks to them?

In May, US retail giant Walmart, which owns Asda, reported global revenues of $123.9bn – an increase of $1.2bn.

GMB has also set up a petition for people to “stand with Asda workers”.

This contract is about increasing the take-home pay of more than 100,000 retail colleagues, through an investment of more than £80m, and ensuring that everyone doing the same job is on the same terms and conditions.

The overwhelming majority of our colleagues from across all our stores… have signed onto the new contracts and while we appreciate that some of our colleagues find the changes more unsettling, we do not want any of them to leave.

We understand colleagues have commitments outside of work and will not be asking them to constantly move the time they work, their days or departments.

Our members are angry. … We’re calling on Asda to respect its workforce and offer dedicated, long-serving staff a better deal.