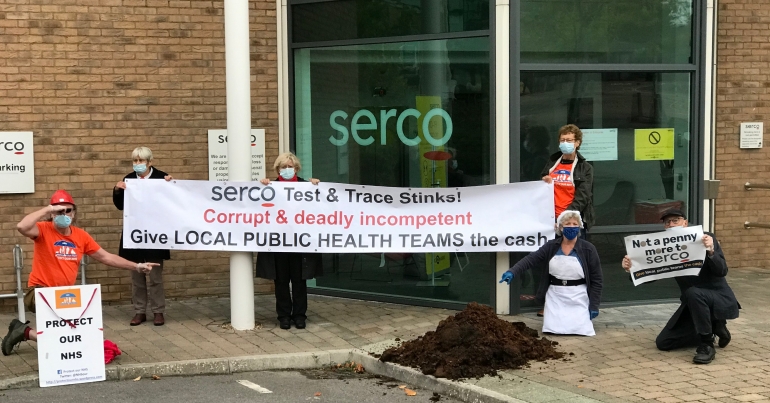 Protesters have dumped horse manure on the doorstep of Serco’s headquarters in Hampshire. The action has sent a clear message to the company, which is responsible for the UK’s test and trace system.

The activists are part of the campaign group Protect Our NHS. They also unfurled a banner saying: “Serco Test & Trace Stinks! –  Corrupt & Deadly Incompetent – Give LOCAL PUBLIC HEALTH TEAMS the Cash”. The action was timed to coincide with other protests against Serco in the UK, including in London.

Mike Campbell of Protect Our NHS Bristol said in a press release:

We’re taking this action in the face of the unmitigated disaster and deadly incompetence of Serco’s national track and trace system which is causing untold misery to millions of people.

Serco has been paid almost £46m to run the UK’s test-and-trace service. The Canary has reported on a number of Serco’s practices, including the fact that it shared hundreds of contact tracers’ email addresses.

In 2019, the company was fined nearly £23m by the Serious Fraud Office over an electronic tagging scandal, while earlier this year it was fined more than £1m for other government contract failures.

Accusations of sexual and physical abuse

Additionally, Serco was awarded contracts to run two immigration removal centres this year, despite staff being accused of sexual abuse at Yarl’s Wood women’s detention centre. And earlier this year, the Independent reported that:

A court recently heard that a rape survivor at the centre was involved in an altercation with 11 Serco staff, during which she was thrown to the floor “like a bag of cement”.

Anthony Horwood is another protester involved in the action against Serco. He said:

Serco wants to profit from the coronavirus crisis and it has now been revealed that Serco’s CEO said he hopes it will ‘cement the position of the private sector’ in our NHS.

But it is abundantly clear to nearly everyone, except the wilfully ignorant, that placing the current system of testing and tracing in the hands of private companies like Serco is not working.

It beggars belief that Serco has not had the contract removed from them and put in the hands of real health professionals in public health departments. This is our money Serco is throwing down the drain and it should be given to the NHS.

Why is the media not shouting to the rooftops that it’s private provision of NHS services which is at the root of the problem?