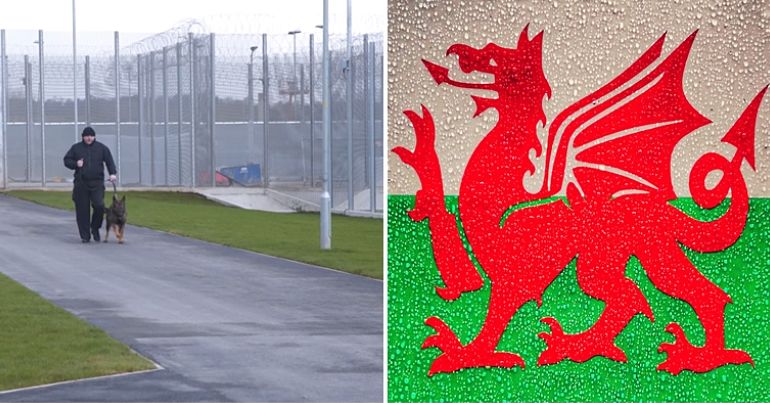 A Welsh language speaker has alleged he and others are being discriminated against for speaking Welsh in HMP Berwyn.

Undod and Prisoner Solidarity Network are campaigning together to stop the persecution of Welsh language speakers at HMP Berwyn.

Prisoner Solidarity Network has been made aware of the ongoing harassment and separation of first language Welsh speakers by staff at HMP Berwyn in North Wales.

Rhodri Cynfor ab Eilian is a prisoner in HMP Berwyn and The Canary spoke to his sister. Speaking in Welsh translated by his sister, ab Eilian alleges:

We are being segregated here. People get IEP [Incentives and Earned Privileges] warnings for speaking Welsh. People have to wait a month to get letters in Welsh. The prison staff are racist towards welsh speakers and black people.

They always question why I speak Welsh. If I speak welsh with someone they hang around like a fruit fly and discourage you from speaking welsh. HMP stoke heath in Shropshire is more accommodating to welsh speakers than HMP Berwyn

It isn’t the first time HMP Berwyn, the second largest prison in Europe, has been embroiled in such controversy. In September 2020, the Independent Monitoring Boards (IMB) published their annual report on HMP Berwyn. The report covered the period March 2019 until February 2020. It found:

In terms of the Welsh language, it was noted that some DIRFs [Discrimination Incident Report Forms] submitted concerned prisoners speaking Welsh on the communities who could not be understood by officers. It was alleged that these prisoners were challenged with a review of their incentives and earned privileges (IEP) status.

In September 2020, North Wales police and crime commissioner Arfon Jones called for an inquiry into this discrimination. However, HM Prison Service told the BBC the claims that were “completely untrue”. It said it “encourages Welsh speaking at the prison”.

The Welsh language in prisons

In 2018, while recognising HMP Berwyn’s progress, the Welsh language commissioner Meri Huws found that Welsh speakers in prison avoided using Welsh. This is because they feared it would make their lives more difficult. Huws said:

Language is not a matter of luxury, but a matter of justice. It’s about the fundamental rights of prisoners to communicate in their own language, or in the language they find it easiest to express themselves.

I’m saddened by stories of prison officers interfering with prisoners’ freedom to speak Welsh with each other and with their families; and it is important to make it clear that such situations are not acceptable.

There are inadequacies and inconsistencies in Welsh-language provision across prisons in Wales, as well as the extent to which prisons in England and Wales are addressing the needs of Welsh-speaking prisoners. It is also disappointing that, four years after we recommended that HMPPS [Her Majesty’s Prison & Probation Service] improve the collection of data about Welsh-speaking prisoners and staff, it is still not collecting accurate data. It was particularly concerning that at the prison we visited in England, little attention appeared to be given to Welsh speakers’ needs.

In recommending a way forward, the committee said:

We recommend that the UK Government ensure that HMPPS collect accurate data about Welsh-speaking prisoners regularly, both in Welsh and English prisons, and provide Welsh-language services accordingly. Detailed data about Welsh speakers should be published and made available to inform service planning. HMPPS should also collaborate fully with the Welsh Government in creating and implementing its new Welsh-language scheme. The Welsh language should also be strongly considered in decision-making about the placement of prisoners.

Discrimination against Welsh speakers has been a longstanding problem in prisons, and it is unacceptable.

Nobody should be denied their most basic linguistic rights in this way, particularly during a pandemic when we know prisoners have been kept in solitary confinement and rates of self harm have soared.

It’s time for the Ministry of Justice to ensure that people’s legal right to speak Welsh is upheld, and treat all prisoners with the basic dignity they deserve.

The Canary contacted the Welsh government for comment, but it didn’t respond by the time of publication. A prison service spokesperson told The Canary:

This is untrue and no complaints have been received. Like every prison in Wales, HMP Berwyn has a Welsh Language Action plan and a dedicated Welsh Language Lead to supports its Welsh-speaking prisoners.