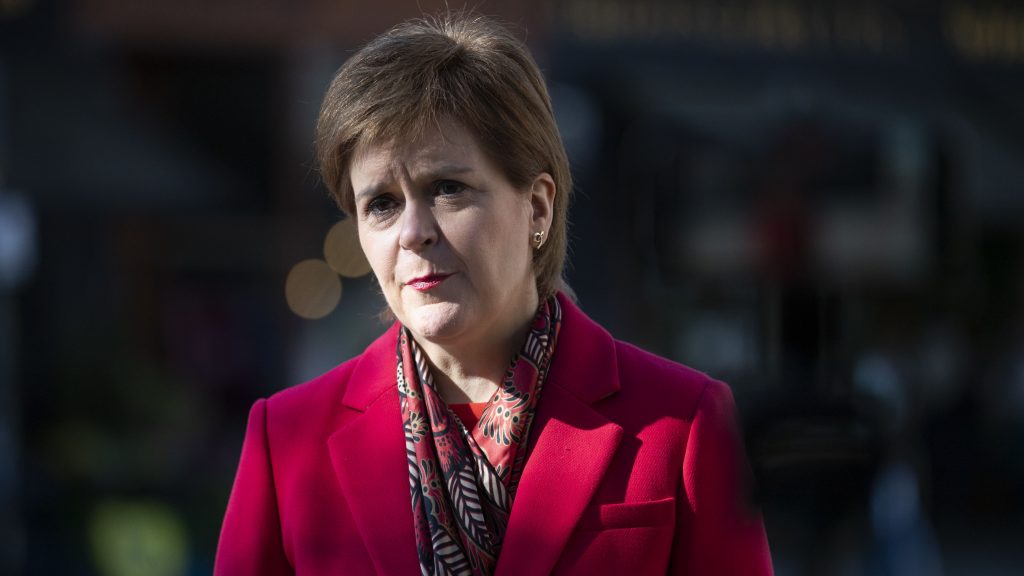 Alex Salmond is now hindering, and not helping, the cause of Scottish independence, his successor Nicola Sturgeon has insisted.

The first minister and SNP leader also questioned the message it would send to women if Salmond returned to Holyrood after May’s election.

Salmond was dramatically unveiled as the leader of the new pro-independence Alba Party at the start of the Scottish election campaign.

The new party is only fielding candidates on the ‘regional list’ section of the ballot. With one opinion poll putting the party on 3%, Sturgeon stressed that “we shouldn’t assume that Alex Salmond is going to return MSP to Holyrood”.

But she insisted she “could not envisage” working with him or his new party.

Speaking to PA Scotland, she said:

We can’t bulldoze our way to independence, we have to build support, persuade people, win trust and confidence.

And when I listen to what is coming out of his new outfit I fear that is more likely to drive the undecided former No voters that we need to attract away from the independence cause rather than to us.

Sturgeon, who succeeded Salmond as first minister and SNP leader in 2014, said she did not know yet what Salmond’s new Alba Party “stands for politically, in terms of policy”. But she added that “any party that can attract the seal of approval of Nigel Farage sounds alarm bells ringing in my head”.

Her comments came after the former UKIP and Brexit Party leader reportedly said: “We are very similar, Alex and I”.

There’s been a very public falling out between the first minister and her former friend and mentor. It’s resulted from the Scottish government’s handling of sexual harassment allegations against Salmond dating back to when he was in power.

I can’t and don’t envisage working with him, or his new party.

That’s not about personal differences. It is firstly because what I think he is doing hinders the cause of independence rather than helps it.

In the short term that is because I think…..there is a risk that asking people to gamble with their vote actually jeopardises an SNP majority.

But beyond that, the tone and the approach he is striking I don’t think is necessarily particularly helpful to building a majority of the population behind independence.

Sturgeon again raised concerns about whether it was appropriate for her predecessor to return to public office. She said “I don’t think it sends a very good message”.

Speaking about his “conduct towards women”, she said that Salmond “seems unable to acknowledge the kind of behaviour he conceded during his criminal trial – where he was acquitted of criminality – was inappropriate”.

This, she insisted, “presents a pretty big barrier to me ever having any kind of dealings with him”.

I could give lots of tactical, political answers, but that is just the honest answer to the situation.

Salmond was cleared of a series of sexual assault allegations following a High Court trial in Edinburgh last year. While Sturgeon added that Salmond had “conceded behaving in certain ways”, the first minister stated:

Part of the problem I have is he hasn’t, as far as I am concerned, accepted that it was inappropriate and shown any signs of having reflected on it, or apologised for it. And that’s a big issue.

I think that raises big, big questions of the appropriateness of a return to public life and public office.

Because he won’t accept that aspects of his behaviour may have been deeply inappropriate, he is giving the impression a man in a powerful position can behave how he wants towards women, and as long as it doesn’t meet a threshold of criminality it is fine. I just fundamentally disagree with that.