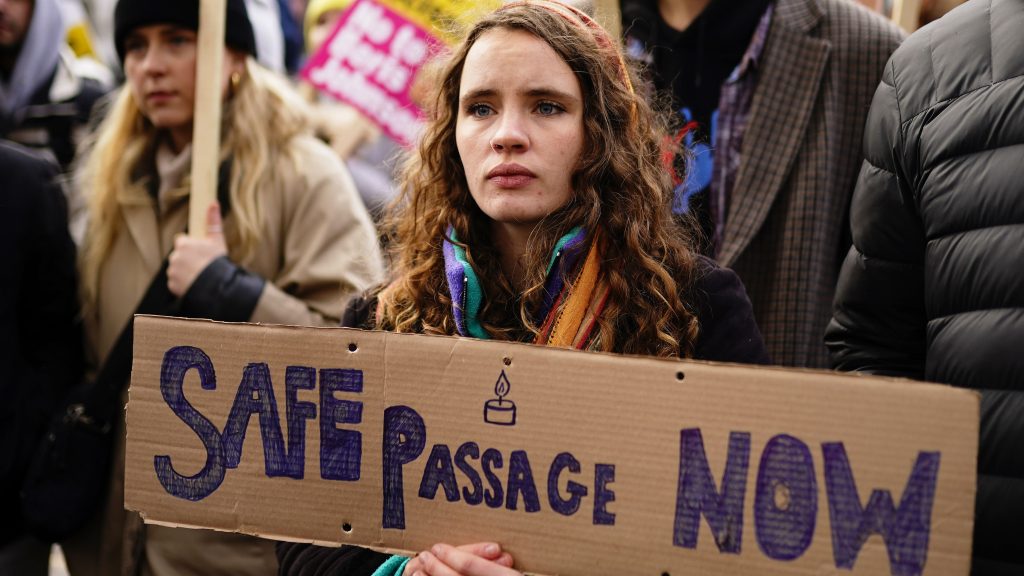 Around 150 people have gathered near 10 Downing Street to protest over the deaths of more than two dozen people who drowned while attempting to cross the English Channel this week.

The demonstration was organised by anti-racism group Stand Up To Racism. It heard speeches from the general secretary of the UK’s largest teachers union – the National Education Union – and several others including religious groups and volunteer organisations directly involved in helping refugees.

Twenty-seven people died during the crossing on 24 November. That has made it one of the deadliest days for refugees crossing the channel. Women and children were among those on board the boat which capsized after leaving Calais. Only two survived.

This afternoon there will be an emergency protest at Downing Street. #Calais #RefugeesWelcome pic.twitter.com/AlX6xU4sdD

Following the tragedy, politicians argued about how to halt the perilous Channel crossings. MPs from Labour, the SNP, and the Green Party called for safe passages that would allow refugees to travel securely in accordance with international law:

Today, more than 30 refugees — including 5 children — have reportedly drowned in the Channel.

This is inhumane. Safe and legal passages need to be made available urgently.

More than 30 people – including at least 5 children – have reportedly drowned in the Channel after their boat capsized.

I am heartbroken. Please let this be the moment we provide safe routes to welcome refugees to Britain, instead of endlessly whipping up hate and fear.

Just dreadful news on the loss of life in the English Channel. People fleeing to find safety being put in a position of extreme risk and in this case loss of life due to a lack of safe routes to claim asylum. We really need to question our humanity.

My heart goes out to all affected by terrible Channel drownings

When the government closes down safe, legal routes for asylum seekers, they’re pushed into taking dangerous ones

This awful tragedy is an inevitable consequence of cruel, inhumane policies
https://t.co/stErGBje00

While several Conservatives blamed France, it’s been pointed out that countries like France have taken in considerably more people than Britain over the past decade:

The UK isn't uniquely affected by migration, our European neighbours take a lot more refugees in than us.

We have a migrant crisis – but it isn’t the one Priti Patel and Boris Johnson would have you think it is. #RefugeesWelcome pic.twitter.com/3OWJvrdkqE

Why on Earth would France agree to take refugees back from the UK, if the UK is not offering to take any refugees from France?

The sense of entitlement from Johnson's govt is pretty extreme.

There’s also the fact that the UK has contributed to the refugee crisis by its involvement in military action in other countries. But it now refuses to take responsibility for the refugees it helped to displace.