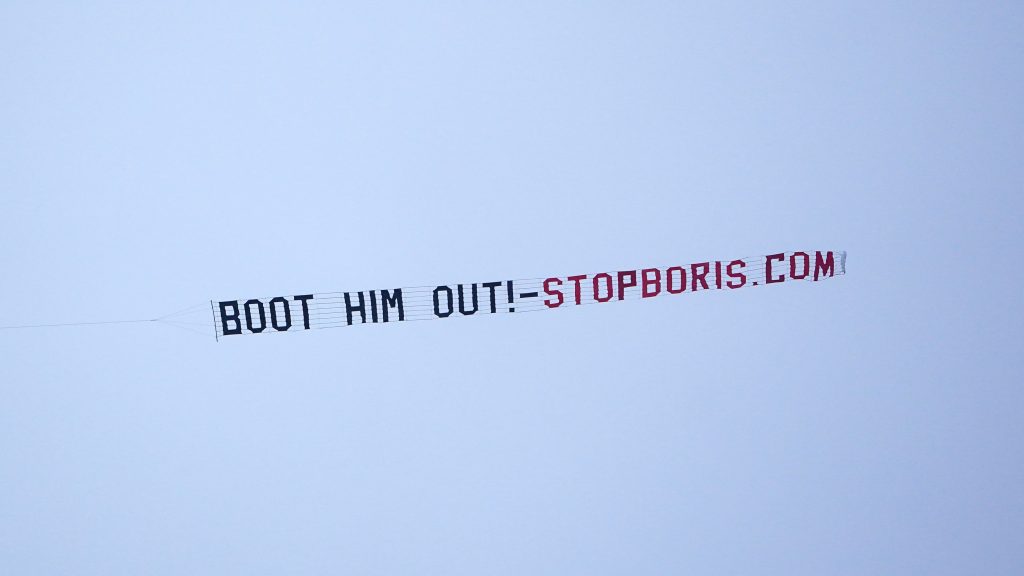 Banners reading “Boot him out! – StopBoris.com” were flown over Premier League matches on Saturday 22 January. The banners flew over games held at Old Trafford in Manchester and Elland Road in Leeds.

Campaign group Open Britain told the PA news agency it had “booked the aircraft”. And the group added that it was taking its “campaign fighting to have Boris Johnson removed from power… to the skies”.

The country no longer wants him as PM – now's the time to boot him out and the place to make it happen is https://t.co/Ju4EKNP2Uw pic.twitter.com/tQa5otAnmw

The group said it had decided to:

increase public pressure after the Prime Minister failed to step down this week.

The website displayed on the banner links to a petition calling for Johnson to be “removed from power”. It currently has more than 77,000 signatures. Leeds United played Newcastle United at Elland Road, with a banner also seen at Old Trafford where Manchester United faced West Ham.

Other recent protests have made Johnson a focal point. A Scottish independence march on 22 January highlighted his recent scandals:

🪧 All Under One Banner's event is taking place after the recent 'partygate’ scandal in Downing Street.

🎥 Demonstrators are calling for PM Boris Johnson to be removed from office 👇 pic.twitter.com/hKcD4Y2xgn

A Labour MP supporting Kill the Bill protests has accused Boris Johnson of turning the UK into an authoritarian state https://t.co/IzRH4PK2HM

And a protest the day before saw a swarm of Johnson look-a-likes descend on Downing Street to mimic one of the many parties he’s accused of having attended:

In an attempt to save his position, Johnson is said to have given in to pressure from backbench MPs to remove coronavirus (Covid-19) restrictions from 26 January.

Meanwhile, party whips are also facing scrutiny. This is due to them employing pressuring tactics against MPs to save Johnson, which the Commons Standards Committee chairman has described as illegal.