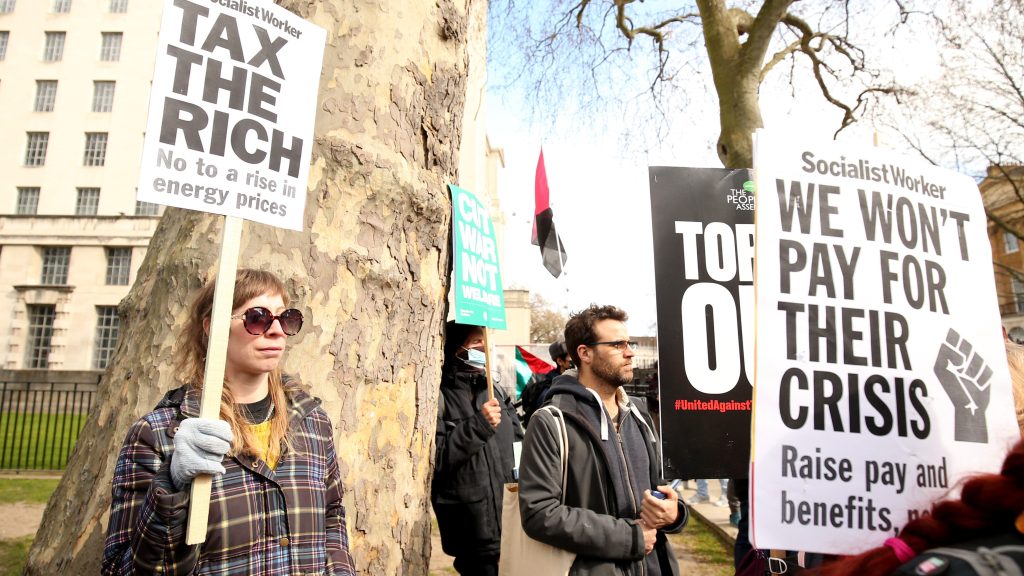 Protesters across the UK have urged the government to pass rising energy prices on to providers instead of low-earning workers.

Around 100 people waved signs reading “tax the rich” and “freeze energy bills, not people” at a Downing Street protest on 2 April. Among them was former Labour leader Jeremy Corbyn. And similar demonstrations were staged across the nation. In Belfast, campaigners called for every household in the north of Ireland to receive £1k to help mitigate increasing fuel and food costs.

At Downing Street in central London, demonstrators made speeches asking the government to freeze energy bills and boost benefits. Protester Isabella Fula, 17, from north London, said the rising cost of living was “a huge problem for many people”. Speaking near Downing Street, she said:

A lot of people that I know are suffering from it personally, and a lot of people that once lived in my area have now moved out due to raising rent and energy bills. People aren’t earning enough to support themselves and buy food, or even pay for bills which are increasing by the minute.

I’m here to protest the rent and the rise in it, and try to aim for a better tomorrow.

Brandon Lewis on the Today programme shamelessly claiming the Govt has provided huge support to people & businesses in the face of unprecedented price rises, with no acknowledgement of the extreme hardship people face.

They’d step over you in the street without a second glance.

Brandon Lewis telling outright lies on @LBC this morning.
There will not be a further £200 reduction in energy bills in October, its a £200 loan, not a reduction, and will push people further into debt.

Corbyn said Lewis’s comment shows the government is “out of touch with the reality of people” facing poverty due to the rising cost of living:

We need government action now — with a price cap on gas and electricity bills and for energy companies to be taken into public ownership to stop many more thousands falling into poverty. #CostOfLivingCrisis pic.twitter.com/026xFK7ZlD

I’m meeting people who are terrified of the next bill, so the very least we need is a price cap on energy, and then we need to say, well look at the profits of energy companies and look at the difficulties of people living.

I was in a food bank this morning talking to people there that don’t want food that they have to cook, because they can’t afford to turn the gas and electricity on to cook it.

This is the 21st century and we’re the fifth richest country in the world – it’s simply wrong and the Government must intervene.