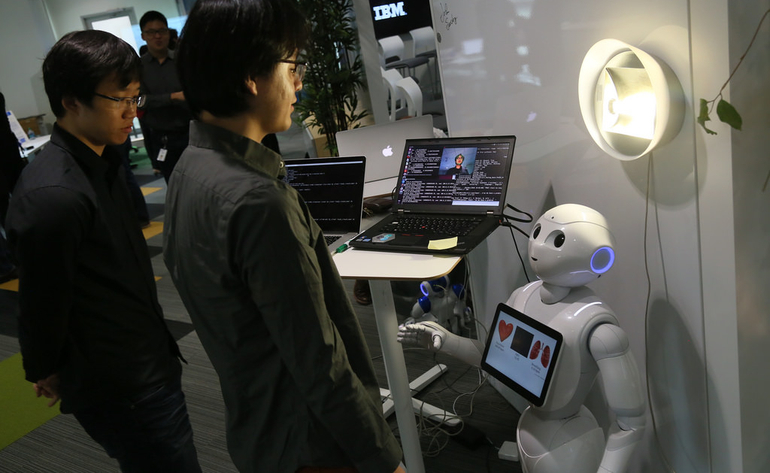 The relationship between humans and machines is becoming ever more intertwined. Already we can see how artificial intelligence (AI) is invading our lives. But soon, everything we think of as ‘human’ could be intimately tied to computer intelligence. Including our sexual and romantic lives.

Computer science pioneer J.C.R. Licklider wrote about the “cooperative interaction between men and electronic computers” in his 1960 paper, Man-Computer Symbiosis. And futurist Ray Kurzweil, who has made a number of correct predictions, said that by 2045 we will be able to “multiply our intelligence a billionfold by wirelessly connecting our neocortex to an artificial neocortex in the cloud”.

It’s hard to imagine. It sounds way too far-fetched. But it’s based on the exponential growth of computer processing power.

A sex doll company unveiled a robot that can speak and be programmed to have a personality. It’s created by Realbotix and is called Harmony 2.0. It’s also considered to be the world’s first AI sex robot. Its creators say it has a “persistent memory”, so it can bring up information from previous conversations. On the company’s website, it states that Harmony 2.0 has been created with the aim of:

But soon it may become quite common to develop intimate relationships with robots. Something previously the preserve of fiction. For example, In the film Her (2013), heartbroken Theodore Twombly (Joaquin Phoenix) develops a relationship with Samantha (Scarlett Johansson), a computer. And in Charlie Brooker’s series Black Mirror, the episode Be Right Back in Season 2 tells the story of a woman who loses her boyfriend in a car accident. She replaces him with an AI duplicate.

Michael Harre, a lecturer in Complex Systems at the University of Sydney, recently said that workplaces will soon include AI. Indeed, as The Canary previously reported, Japanese insurance firm Fukoku Mutual Life Insurance is replacing its employees with an AI system.

Harre believes that the introduction of AI in the workplace will raise some interesting questions about our sense of self. He said:

The fact that we will be interacting with the appearance of consciousness in things that are clearly not biological will be enough for us to at least unconsciously revise what we think consciousness is.

There are worries about AI making all of us unemployed. But Harre isn’t so pessimistic. He believes that people who are flexible and open to learning will still be very much in demand. Also, it’s not clear if unique human traits such as intuition, empathy, and creativity can be computed.

But a study completed by Israeli researchers last year did suggest that a robot could be as effective a listener as a person.

In the experiment, half of the participants told a personal story to a robot that was unresponsive. The other half spoke to a robot that responded with supportive comments, as well as gestures that indicate understanding and sympathy, like nodding and looking the participant in the eyes. The study found that people can develop an attachment to the ‘sympathetic’ robots. They also showed the same feelings and responses they would have if the listener was an actual person.

The hope is that this human-like companion support will offer relief to people who suffer from isolation, such as elderly people. ElliQ is a robot being tested with elderly people in San Francisco. It can speak and respond with a variation of movements, sounds, and lights which offer emotional support. It can also offer suggestions and reminders, like a caregiver.

We don’t know if these interactions with robots will improve human-to-human interactions or replace them to an extent. Right now, for many of us, our smartphones are more or less another appendage. We can’t go anywhere without them. One paper supports the widely held notion that they’re ruining real-life conversations. So as AI starts to invade more aspects of our lives, what we regard as ‘human’ and how we communicate is likely to become radically altered.

– Read more about jobs that will be at risk of automation.

– Check out more articles from The Canary’s science section.