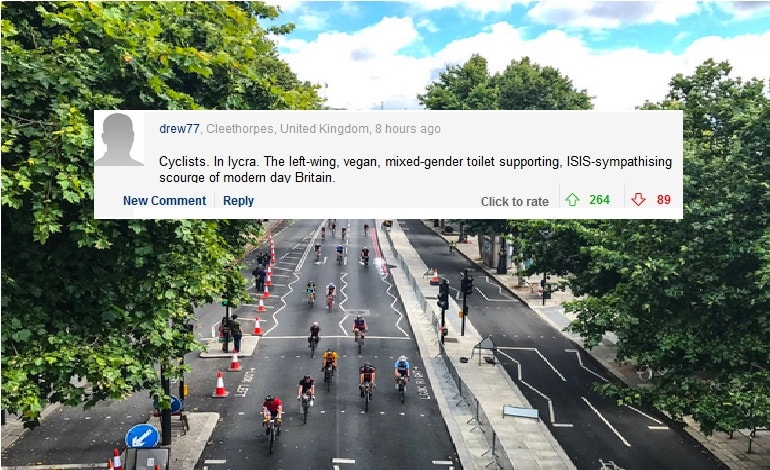 While the disastrous impact of climate change becomes ever more apparent, Daily Mail readers are busy losing their marbles over cyclists.

The Mail appears to know its readership well. Ignoring the largely positive response to a cycling festival in London, the author delved deep to provoke outrage. With a few choice tweets, The Mail generated the following headline: 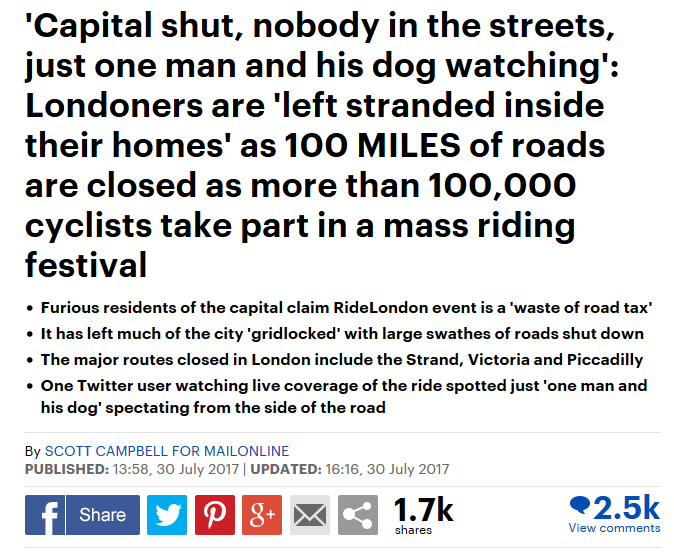 The reaction from Mail readers was priceless: 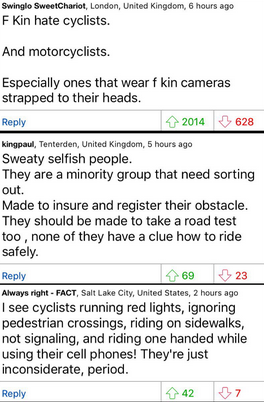 According to the inclinations of Mail readers, cyclists are “sweaty selfish people”. Yet a 3.5-metre-wide single lane in a city like London can transport 14,000 cyclists an hour. If people are in cars, that very same lane will be needlessly congested, transporting just 2,000 people an hour.

With over 2,000 ‘up-votes’, Swinglo SweetChariot’s borderline homicidal comment was one of the highest rated:

"I especially hate the ones that I can't knock over without being prosecuted." pic.twitter.com/2mM7EiRNAn

The hatred of cyclists does not appear to be on the fringes of the Mail readership: 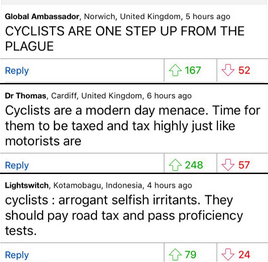 “Banned or taxed or…”

Fortunately, Swamipumk has a few solutions: 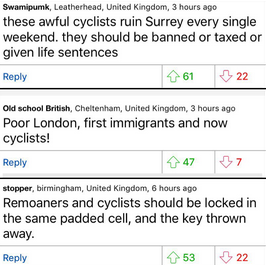 For this Mail reader, “life sentences” are an appropriate response to people on bicycles. Then, ‘Old school British’ swooped in with a bit of classic Mail racism, lamenting the number of foreigners in the capital:

But ironically, research suggests Mail-reading motorist types are the ones pressuring our public services, not immigrants. Transport for London calculated that, if all Londoners walked or cycled for 20 minutes a day, the NHS would save £1.7bn in treatment costs over 25 years in the capital alone. Meanwhile, the UK currently needs more immigrants to avoid “economic catastrophe”, because immigration drives economic activity.

All these practical cycling benefits come before you consider the environmental impact of oil-guzzling vehicles. Air pollution causes up to 9,500 early deaths a year in London alone, according to a report from King’s College London. Cycling through cities is a no-brainer. This makes the Mail reactions all the more ridiculous.

– Sign the petition against Hinkley Point C. Renewables would be much cheaper.