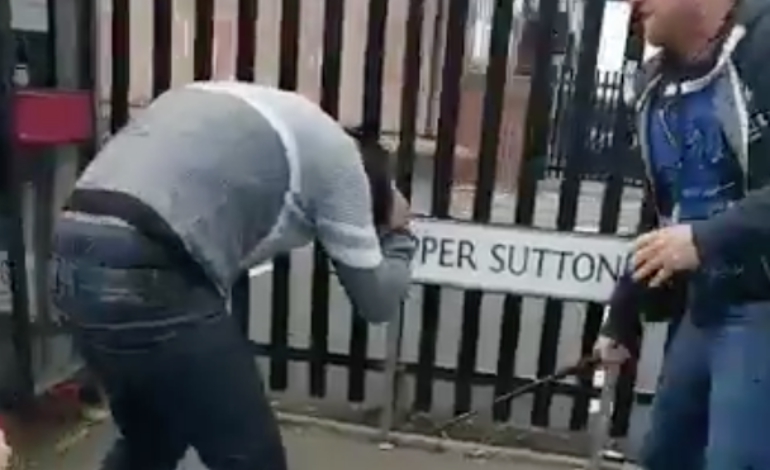 Video footage has been posted on social media of plainclothes police officers attacking an Asian man in Birmingham for no apparent reason.

The officers from West Midlands Police are seen making an arrest for possession of drugs after a vehicle stop. But they quickly turn their attention to a group of men who appear to be watching the arrest.

Initially, the officers appear to be trying to get the group of men to move away. But they do so with violence, including roughly shoving one man. Another member of the group tries to calm things down and can be heard saying:

But the officer appears to go out of his way to get to the man he’d initially shoved. And he pushes him again.

Two officers quickly escalate the situation. One draws his baton and hits the man around the legs at least four times. Another of the men present can be heard shouting:

Ignoring the pleas, the policemen then bring him onto the floor, with one of the officers kneeling on his head.

During a vehicle search in Aston, Birmingham, plainclothes officers seem like they're itching to start a fight with Asian locals pic.twitter.com/TidAfnFllS

It’s not always possible to know the full story from clips that appear on social media. But speaking to The Canary, Kevin Blowe (coordinator of the Network for Police Monitoring) claimed the context was irrelevant:

Comments on social media have raised questions about the context of the arrest, but this is irrelevant – what matters is whether the use of force by the police was reasonable and proportionate.

It is difficult not to draw the conclusion that the police officers in the video lost control and were itching for a fight after one felt he was “disrespected”.

Most reasonable people watching this will recognise the violence that followed was wholly unjustified. Had this not been captured on film, it is unlikely West Midlands Police would now have to account for their officers’ conduct.

And he makes the point that the film:

is a reminder why filming stop and search incidents is so important.

It seems as though even the police are having a hard time trying to justify the incident. In a statement to The Canary, a spokesperson for West Midlands Police said:

We are aware of a video circulating on social media relating to arrests made by WMP officers in Birmingham yesterday.

We are quickly gathering as much information as possible and we will undertake an assessment of that information to understand exactly what has happened.

As always, we are treating this matter seriously and will provide further updates when we can.

The spokesperson also confirmed that two arrests were made:

A 20-year-old man was arrested for a public order offence and released under investigation.

A 28-year-old man was cautioned for cannabis possession.

In other words, the man that was attacked by these police officers has not currently been charged with any offence. The police have also stated that the officers concerned have been taken off normal duties while the incident is investigated.

This incident comes after three recent deaths in custody, and will do nothing to restore trust in the police from all communities; but especially those people from Black, Asian and minority ethnic backgrounds.

It is a shocking display of force that appears to be totally disproportionate. And as Blowe states, it shows the importance of filming the police. Because we must ensure that everyone knows how aggressive some officers are prepared to be on the streets of the UK.