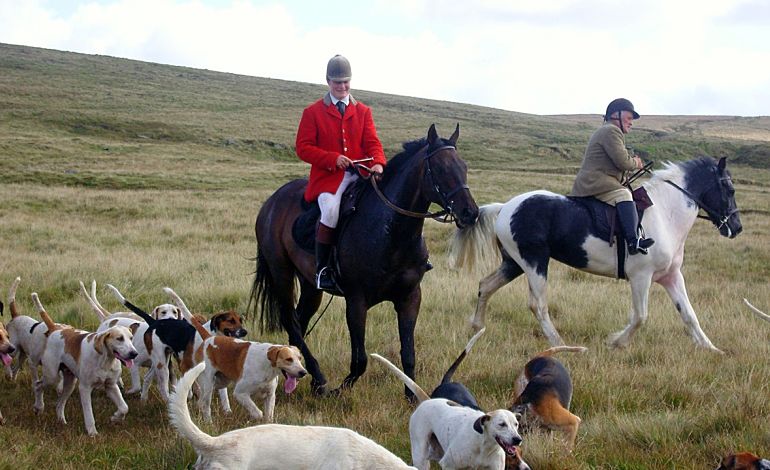 The National Trust is coming under fire for licensing hunts associated with violence. The Canary has seen documents alleging that 44 of the 67 hunting packs licensed by the National Trust are tied to criminal violence. And this, according to the dossier’s author, is “not compatible with an institution wishing to have charitable status”.

The National Trust permits trail hunting on its property. This practice supposedly involves hunting hounds following an artificially laid scent, rather than the scent of a live animal; and so allows hunts to continue their traditions while avoiding activities made illegal by the Hunting Act.

But anti-hunt activists claim that trail hunting is a smokescreen allowing real hunting to continue as it did before the ban. Helen Beynon, a member of the National Trust, witnessed first-hand several instances of trail hunting but “was appalled to see how loopholes in the law were being exploited”. And in October 2017, she brought a vote to have trail hunting banned from National Trust property.

The motion for a ban controversially failed by just a few hundred votes. But activists have not given up their mission to protect and defend wildlife from bloodsports.

‘A consistent pattern has emerged’

Barbara Slaska has lodged a complaint with the Charity Commission, the charities regulator for England and Wales, that claims the National Trust is facilitating criminal violence by allowing hunts on its property.

The Canary has seen a dossier of evidence lodged with the regulator as well as a covering letter sent to Trustees of the National Trust ahead of their board meeting in late November 2017. The dossier contains 66 pages of incidents of recklessness and violence by 44 hunts currently licensed to trail hunt on National Trust property.

Having spent nine months examining the behaviour of 44 hunts licensed by the Trust a consistent pattern has emerged. Firstly and most worrying for public safety is the reckless nature of this activity evidenced by a lack of control over hounds resulting in regular hound havoc, on railway lines, in villages, in people’s gardens and in wildlife sanctuaries, resulting in hounds being hit by speeding trains and members of the public being put in danger and fear. Secondly, hunt observers have been and are being assaulted on a regular basis by virtually each hunt on this list. Many hunts having multiple convictions for assault.

A history of violence

The incidents are lengthy and date back years.

Some of those cited include:

This, Slaska says in her covering letter, shows:

that contrary to the Trust’s position that hunting is a harmless activity no different to mountain biking, the recklessness and violence involved is putting the beneficiaries of this charity at serious risk as well as the wider public, this is in direct conflict with the responsibility of trustees to safeguard the beneficiaries.

In approving licences for hunts on National Trust lands, Slaska claims Trustees breach a number of Charity Commission regulations including:

As a result, the National Trust is opening itself up not only to public criticism but falling foul of charity regulations as well. Slaska says the dossier’s contents are evidence:

that the Trustees are guilty of mismanagement because as trustees of a charity they are under a duty to ensure the law of the land is upheld. By ignoring evidence of widespread illegal hunting and of widespread assaults – evidence of which has been presented to them on numerous occasions by monitors, by animal welfare charities and by members of the public – they are not acting in a reasonable way.

Time to own up

The dossier’s evidence comes from saboteur and monitor groups, from local and national press, and from first-hand accounts of people involved in defending wildlife.

The document presents strong evidence of hunts engaging in reckless, violent behaviour both regularly and over time. And it reveals the seamy underbelly of violence that hunts often try to cover up. But as recently leaked audio from “one of England’s most notorious hunts” reveals, it can be hugely damaging once this hunt violence reaches the public.

Whether or not hunts follow an artificially laid scent, the reality of violence used is without doubt. And that’s something the National Trust can’t ignore any longer.

– Read other stories from The Canary about wildlife crime.