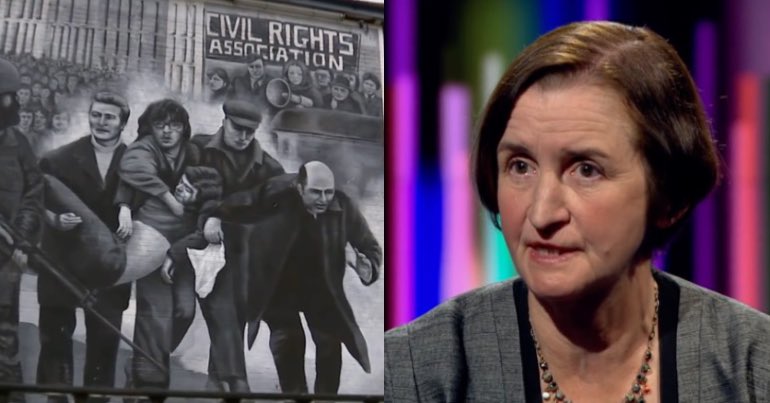 The Labour Party’s new approach to foreign policy has proven popular with the public under Jeremy Corbyn’s leadership.

Mordaunt later expressed her belief that British armed forces should have amnesty and not be investigated for historic crimes in the north of Ireland.

The saga unfolded after a tweet Griffith posted on 9 May. In it, she showed approval for an approach advocated by Mordaunt:

Glad to hear this from the new Defence Sec.

The Tories made a commitment to deal with this back in 2017 and it‘s shameful that no action has been taken.

Labour will support any proposals that are effective and fair and I look forward to working with @PennyMordaunt on this. https://t.co/2dn2pBDzbr

Mordaunt was addressing the controversial issue of the possible prosecution of British troops for historic crimes. According to the Guardian, Mordaunt’s views suggested:

that she favoured an amnesty for British soldiers from historical prosecutions

Many take issue with this approach for violating the rights of victims. And Griffith’s apparent support for it drew a hostile reaction on social media:

Who has decided Labour will support this? I don't support it. And now, why should I support you? Uphold the rule of law or begone quite frankly.

Journalist Abi Wilkinson had this to say:

Hi Nia, you are shadow defence secretary for the party I support and I’d really like to know the answer to this. If I’ve misunderstood and you don’t support these plans, it would be good to have clarity on that too https://t.co/ukBGPj12iQ

I’m not feeling great about (seemingly) being in a pro-legal impunity for war crimes party. If Nia Griffith’s statement isn’t official policy, it would be great for the Labour leadership to say so

I’ve just seen this, deeply worried if we allow British people to get away with war crimes (if guilty): we would reduce UKs standing in world, damage rule of law, threaten peace in NI & make our army less safe/seen as HR abusers. I could not support. Hope this is mistake! https://t.co/JBv9YoTVc7

would protect [British armed forces] from investigation over actions on the battlefield abroad after 10 years, except in “exceptional circumstances”, such as if compelling new evidence emerged.

It will stipulate that such prosecutions are not in the public interest unless there are “exceptional circumstances”.

ITV reported that this amnesty wouldn’t apply to the north of Ireland. According to the Independent, however, Mordaunt told a naval conference in London:

I do think it should cover Northern Ireland.

How not to set the record straight

After Mordaunt’s subsequent provocative comments, Griffith tweeted on 15 May:

As a party we have consistently said that there need to be measures to deal with false or vexatious claims. The government has today come forward with a number of proposals which MPs will want to study in detail. 2/2

But for many, this still wasn’t enough. Journalist Abi Wilkinson had this to say:

Does this mean that you do or don’t support the proposal for a 10 year limit on legal liability for war crimes?

Journalist Owen Jones was also displeased. He included a link to a petition addressed to Jeremy Corbyn, expressing:

profound disappointment with Nia Griffith’s support for the government’s proposals to grant members of the armed forces immunity from prosecution.

This horrifying tweet from Labour's Defence Secretary backing the Tories' attempt to grant the armed forces immunity from prosecution is an attack on human rights and the rule of law. As such, I've signed this letter, and you should, too. https://t.co/soBcDhj1X3 https://t.co/g0Mr2DwX7J

Meanwhile, London Labour Students felt Griffith’s comments were contrary to the Labour Party they believe in:

The drive to grant war criminals amnesty is one led and organised by the hard right of the Tory Party, UKIP and Tommy Robinson. We call on the Labour Party to clarify that this isn't our policy, and for Nia Griffith to resign from the Shadow Cabinet. (2/2)

I just signed this letter asking the NEC to clarify Labour’s position on the prosecution of soldiers accused of historic war crimes after this pretty horrifying tweet from Nia Griffith – sign and share folks.https://t.co/DQVpNqkEFX https://t.co/Jmziy9RPtl

The Canary contacted Griffith for comment, but she had not responded by the time of publication.

The heart of the Labour Party is still being fought for

Caroline Molloy of Open Democracy argued that the Griffith furore shows a problem of party leadership on security issues:

Griffith may later clarify her position. But this incident suggests there’s a battle still raging for the soul of the Labour Party. Hopefully, the battle will be won by politicians unwilling to accept the military violating human rights with impunity.