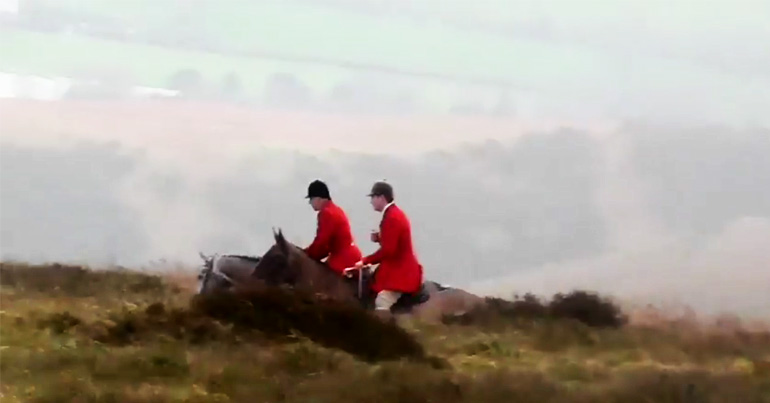 Hunts in Shropshire won’t be meeting on the Long Mynd estate this season. It comes after the National Trust suspended licences last season when one hunt was caught chasing a fox. And campaigners are celebrating the news.

On 4 January, The Canary reported that the National Trust estate at Long Mynd, Shropshire, had banned the South Shropshire Hunt. The move followed footage from anti-hunt group Shropshire Monitors showing the hunt chasing a fox across the estate on 10 December 2018. Terriermen also accompanied the hunt, which breaks the charity’s own rules for trail hunting. Shropshire Monitors then caught the hunt trespassing on Long Mynd during its suspension.

The issue has continued into the current 2019/20 hunting season. The Shropshire Star reported on 4 October that Long Mynd estate hasn’t issued any licences for trail hunting this year.

Anti-hunting campaigners put forward a different story. Stop Hunting on the Nation’s Land is a coalition of groups continuing the work previously carried out by National Dis-Trust, including pressuring the National Trust to end hunting on its land. A spokesperson for the group told The Canary that, following the suspensions, it believes Long Mynd estate wasn’t planning to license hunting this year anyway. As a result, it claimed:

the hunts choosing not to apply as they claim is irrelevant; they won’t get licensed either way.

Whether the hunts were banned or chose not to return, the outcome is the same: a major National Trust estate will be hunt-free this year. Stop Hunting on the Nation’s Land told The Canary:

We’re glad that a positive decision has been reached about wildlife crime on Long Mynd in Shropshire following the work of National Dis-Trust and Shropshire Monitors, and credit is due to the National Trust staff behind this decision.

However, it also noted that this is just one of the National Trust’s Shropshire estates:

The group highlighted an incident in which the Albrighton and Woodland Hunt killed a cat in a Staffordshire garden during a March 2018 hunt.

All the way to the top

The campaign to end hunting on National Trust land reached a pivotal moment in 2017. At the charity’s AGM that year, member and anti-hunting campaigner Helen Beynon brought a motion to ban all hunting including trail hunting from National Trust land. It lost by just a few hundred votes. However, campaigners have maintained pressure on the charity, and their work now appears to be paying off.

Hunts across the country have consistently shown they are rarely capable of hunting without harming animals or breaking the law. The National Trust’s Long Mynd estate appears to recognise these dangers. But until it’s recognised at the very top of the National Trust, there is still work to be done.