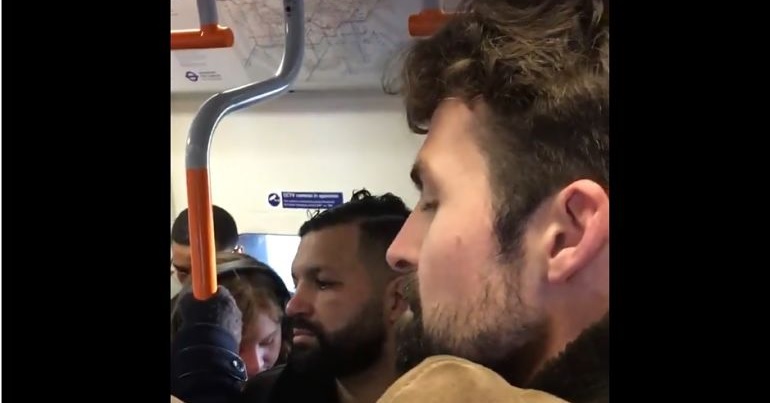 An NHS doctor was responsible for an extraordinary interruption in people’s daily commute recently. As you’d expect from a doctor, the apparent motive behind his intrusion was saving lives. And it’s something every voter should see.

The doctor was caught on camera addressing a packed carriage. Attempting to draw people out of the ordinarily solitary experience of such journeys, he urged them to think about two issues in the upcoming general election:

“I’m seeing your mom and your dad in the corridors because there’s no beds and I’m having to apologise because they’re not getting the service when they’re having a heart attack”.

NHS doctor urges you to think about #NHScrisis and #ClimateEmergency.

First, he spoke about the NHS, saying:

I’ve been a doctor working in the NHS for 10 years now. I’ve watched it degrade over the time since I’ve graduated from chronic underfunding. They say they’re putting more money in, but it doesn’t keep up with demand.

So when I’m seeing your mum and your dad in the corridors because there’s no beds, and I’m having to apologise because they’re not getting the service when they’re having a heart attack. The hospitals are already full in August, I don’t know what’s going to happen this winter.

Figures released on 14 November support the doctor’s account. England’s A&E departments produced their worst waiting times on record in October. The target is for 95% of patients who attend A&E to receive treatment or admittance within four hours. Hospital A&E units only managed 74.5% in October. Performance of A&Es overall, which includes walk-in centres and urgent care centres, sat at 83.6%. Both are record lows since targets were introduced in 2004.

The devastation of our health service is an avoidable tragedy and the direct result of ten years of Conservative cuts.

Boris Johnson also refused to rule out further privatisation of the NHS in a recent interview. Meanwhile, numerous discussions between UK and US officials on drug pricing in any post-Brexit trade deal have fuelled concerns that for-profit pharma companies could charge the NHS much more for drugs under a Conservative-led government.

We’re out of the time of projections and wondering whether it’s happening, we’re watching it happen now. We’re in the sixth mass extinction on this planet. It’s not projections, we’re counting species going extinct.

Indeed, in 2017, scientists reported that the “biological annihilation” of wildlife over the past few decades has triggered the world’s sixth mass extinction event. In October 2018, the World Wildlife Fund reported that human activity was responsible for 60% loss of diversity of vertebrate animals between 1970-2014. More recently, the UN warned that:

1 million animal and plant species are now threatened with extinction, many within decades, more than ever before in human history.

Furthermore, the Intergovernmental Panel on Climate Change (IPCC) released its climate report in October 2018. It concluded that global warming must be kept to 1.5°C at the most, half a degree hotter than right now, if we’re to limit the most severe effects of climate change. The UN said we had 12 years, until 2030, to change our ways enough to limit warming to that level.

As the doctor argued, the climate crisis is already here with regular and vicious wildfires, floods, hurricanes, tsunamis, and droughts. And there are multiple animal extinctions year on year. Clearly, we’re also seeing a crisis in the health service.

The doctor asked travellers to think about these critical issues in the election. “We can’t go on in the way that we are”, he said. That’s the choice facing voters. Whether to vote for the Conservatives: the creators and disciples of a system that has helped to bring us to this ghastly point in our NHS and planetary history. Or whether to back a party, Labour, which is promising change.