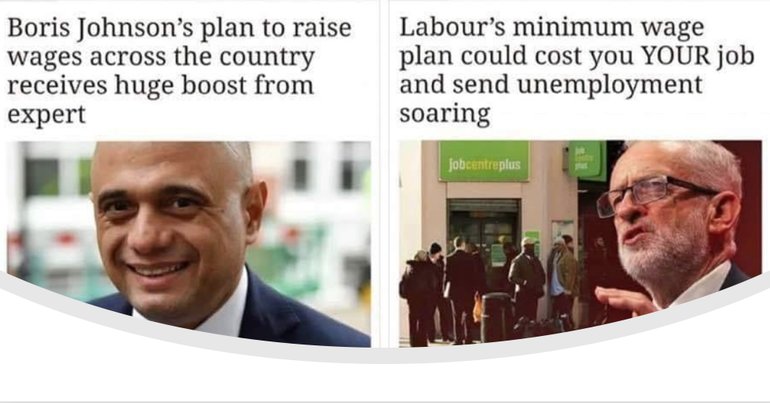 If you needed a clear example of biased reporting in our media, you won’t find a much clearer one than this. The same policy, the same newspaper, two totally different stories.

The Express train to nowhere

Blatant example of utterly ridiculous media bias. Apparently the Tories raising the minimum wage would be great as a US 'expert' says so.

But if Labour raise the minimum wage, unemployment will "soar" and it may "cost you YOUR job". Total incoherent bullshit from the Express pic.twitter.com/obsNIcwD9V

These are two genuine stories from the Express, just two months apart. Labour’s minimum wage “could cost you YOUR job and send unemployment soaring”. But the Conservative party’s “plan to raise wages across the country receives huge boost from expert”.

It’s not isolated to the Express either. Here’s how the Sun reported the two stories. 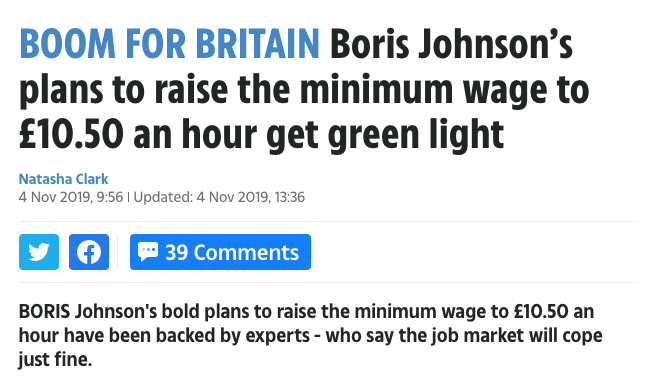 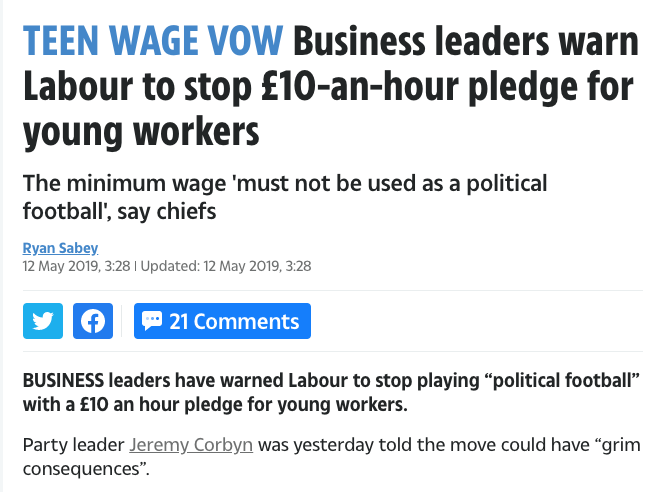 The reason is simple: Johnson’s living wage plans are not real, and the Express would never have to pay them.

Johnson’s wage promise doesn’t kick in until 2024. And even then would only apply to over 21s. Labour’s plan would see all workers over the age of 16 paid the £10 per hour minimum wage beginning in 2020. One is fantasy, one is reality.

The papers are helping the Tories create “jam tomorrow” campaign promises. UK wages are a third lower today than in 2008 – the legacy of nearly a decade of the Tories in office. But nevertheless, Johnson will promise better things coming. But always over an imaginary hill.

If either paper believed for a minute that he would implement this policy, he’d be getting the same hostile press as Corbyn.

Just three companies dominate 83% of newspaper reach in the UK. That’s three billionaires dominating the UK press. And they cannot be trusted to play fair when it comes to policies that invest in regular people, rather than providing them with government subsidies or tax cuts.

The UK’s corporate welfare state is enormous. Research by the Sheffield Political Economy Research Institute (SPERI) estimates that welfare to corporations costs the UK government between £93bn and £180bn every year. To put those figures in context, the entire budget for Health and Social Care in England is £139bn a year. The taxpayer is bailing out business to the tune of an entire NHS and more, every single year.

The almost entirely conservative media works to keep that corporate welfare state out of view. Because when it’s visible, it’s clearly the public spending we should be cutting first. Especially when we have record numbers of people relying on foodbanks to eat.

When Labour talks about increasing the minimum wage, it doesn’t need a magic money tree. They’re just diverting welfare away from a small number of wealthy individuals and corporations and towards the majority of voters who need it. So unless you don’t think your hospitals, schools, and community are worth investing in, it’s a no-brainer. Don’t let the billionaire press convince you otherwise.