In 24 seconds of TV gold, Boris Johnson gives Britons a massive reason not to vote for him - Canary 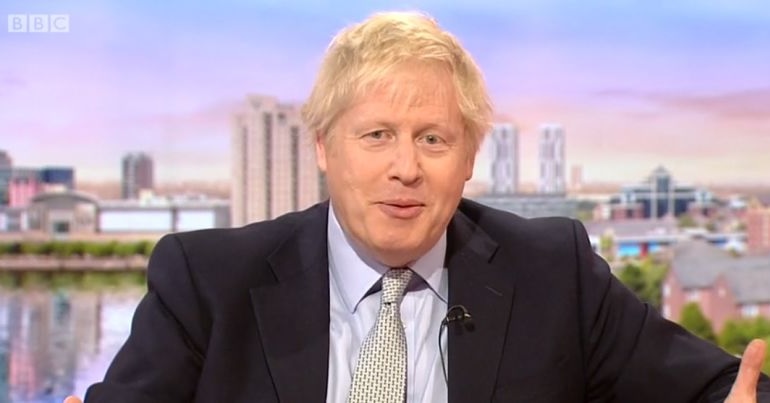 Boris Johnson was plastered all over the BBC on 15 November. The PM appeared on BBC Radio 5 Live, and got away with saying his party doesn’t “do deals” without any challenge from the show’s host, despite the Tory/DUP deal after the last election. BBC Breakfast also interviewed him. But in 24 excruciating seconds of that particular appearance, Johnson managed to give Britons a massive reason not to vote for him.

Why are you relatable to families up and down across the country? How can they relate to you and your family?

23 seconds of Boris Johnson's interview this morning that every working class person should see. And when Labour bring in Free Broadband, they will be able to. pic.twitter.com/Bvu0HAHs4P

Well, I, I think that, er, the best answer I can give is that I, I, of course I’ve been, very, I’ve had a very happy and wonderful life

He went to explain that he was the “beneficiary” of the “fantastic opportunities” given to him by his parents. At this point, Munchetty interjected, repeating “family man, family man”. If this was the presenter’s attempt to get him back on track, it somewhat worked. Because the PM at least started talking about what he wanted to do for the people he appeared to think don’t have of a single reason to relate to him. He said:

What I want for every child in this country is to have a sense that they can achieve their full potential.

Pressed more on the relatable question, the PM concluded:

Am I relatable? I’ve not the faintest idea. It seems to me the most difficult psychological question that anybody’s ever asked me.

Above my pay grade

Clearly, Johnson struggled with this question. That’s not surprising, given how uncomfortable he looks when actually trying to ‘relate’ to the people he’s meant to serve:

The wheels on the bus are coming off
pic.twitter.com/bnmPqWykxg

This doesn’t appear to be a problem shared by his main competitor in the election, Jeremy Corbyn:

And after you watch Boris flailing, peek at this. pic.twitter.com/ScM1ssNDf1

The disconnect between Conservative politicians and the people of Britain is also apparent in the former’s policy choices. Just look at who’s been the winners and losers of nine years of austerity. Private companies have come out on top, as successive Tory-led governments have boosted their profits through gifting them health service and other public sector contracts. Meanwhile, many ordinary people have suffered and been left out in the cold.

That’s the problem with government ‘by the elite‘. It too often becomes a government for the elite, not the people it’s meant to serve.