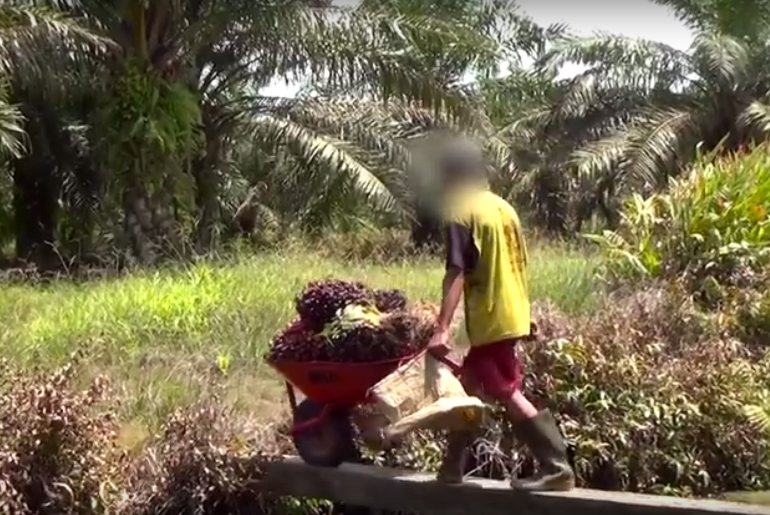 Multinational food giants Nestlé, Kellogg’s and Unilever stand accused of using palm oil produced by child labour in many of their well-known products. An investigation from Amnesty International claims that children are undertaking dangerous and back-breaking work on plantations in Indonesia.

Palm oil company Wilmar, based in Singapore, is allegedly responsible for the human rights violations. Amnesty documented the abuses occurring on the plantations and then traced the onward supply of the palm oil to the big three food multinationals, among many others.

The children, aged eight to 14, reportedly suffered exposure to toxic chemicals without safety equipment, and repeatedly had to move palm fruit sacks weighing 25kg. One 10-year-old boy started working for a supplier to Wilmar aged eight. He described working six days a week, getting up at 6am to gather palm fruit, saying:

I don’t go to school… I only pick up the loose fruit. The hardest thing is to gather the loose fruit because they are heavy. My hands hurt and my body aches.

I left school to help my father because he couldn’t do the work anymore. He was sick… I regret leaving school. I would have liked to have gone to school to become smarter. I would like to become a teacher.

Nestlé, Kellogg’s and Unilever have all signed up to the Roundtable on Sustainable Palm Oil (RSPO), giving them the right to display the trademark on their food products. To be a member of the RSPO, companies have to comply with a set of environmental and social criteria. One of the criteria is to provide workers with fair treatment according to local and international labour rights standards. Meghna Abraham, the senior Amnesty International investigator, said:

These findings will shock any consumer who thinks they are making ethical choices in the supermarket when they buy products that claim to use sustainable palm oil.

There is nothing sustainable about palm oil that is produced using child labour and forced labour. Something is wrong when nine companies turning over a combined revenue of £260bn in 2015 are unable to do anything about the atrocious treatment of palm oil workers earning a pittance.

The Canary previously reported on the environmental devastation caused by the palm oil industry. Production of palm oil doubled between 2000 and 2010 and is predicted to double again by 2020. To accommodate this expansion, the United Nations estimates 98% of the Indonesian rainforest will be destroyed along with the habitat of many already endangered species.

Farmers commonly use the ‘slash and burn’ method to clear areas of forest in Indonesia for the production of palm oil. Air pollution from forest fires has become a major environmental hazard for the workers at the plantations, but also for the rest of Indonesia’s population and neighbouring countries. In 2015 more than half a million people  needed treatment for respiratory infections and at least 19 died. The Indonesian fires of 2015 released more carbon dioxide than the annual emissions of the UK and Japan.

Along with air pollution, workers also have to deal with exposure to toxic chemicals used in pesticides, weedkillers, and fertilisers. Paraquat, which is highly toxic to humans and banned in the European Union, is one of the chemicals Amnesty says is being used to spray crops. However, Wilmar claims to have phased it out in 2012.

UK food brands owned by the powerful multinational food giants that use this palm oil include:

A spokesperson from Nestlé said the company was not currently able to trace its products back to the plantation in the report, adding:

We will investigate allegations related to our purchasing of palm oil, along with our suppliers.

Amnesty International is not asking for a boycott of palm oil products as it doesn’t think this will help. Abraham says that, since the companies are already promising that the palm oil is sustainable, it’s time they actually make it sustainable. Consequently it is: “time to make all these companies accountable”.

In order to stop human rights abuses on palm oil plantations, the Amnesty campaign requests that you ask the makers of your favourite brands where their palm oil comes from.

– Use Deforestation Free Funds to see if your investment fund has links to deforestation.