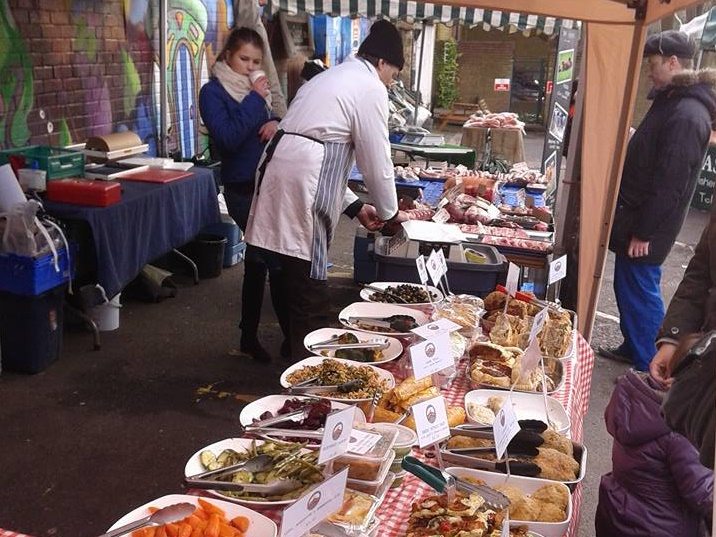 Right in the heart of South London, a stunning project is taking on the might of globalisation. Its goal? To get us all working together to divest from our reliance on oil, corporations, global currency, and mass industry. And with its striking sense of community cohesion, and enthusiastic organisers, it may well work.

The Crystal Palace Food Market is on Haynes Lane in the south London suburb. It is a community not-for-profit project that’s open every Saturday from 10am-3pm. The market’s aims are to:

The market was developed by a group of residents in conjunction with Crystal Palace Transition Town. The Transition movement aims to divest from the planet’s reliance on fossil fuels, counter climate change, reduce finite consumption, promote inclusivity and social justice and be a positive, grassroots movement. It is active in over 50 countries and in thousands of different groups. And Crystal Palace Food Market fits perfectly with the Transition ethos:

The Canary visited the market and spoke to Karen Jones, one of its founders. She said that the Transition movement’s mantra has developed beyond its original goal. And it’s why the market fits so well in the movement:

Transition Towns were originally about transitioning away from oil dependence. But as they developed, they then became about building resilient communities that are ‘linked up’. Also, they are about channelling the energy for change that exists in communities into sustainable projects such as local food, renewable energy sources and alternative currencies.

When you visit Crystal Palace Food Market, the first thing that strikes you is the “linked up” sense of community. The market is a real melting pot of people from all walks of life. A former Eastenders actress works on one of the fruit and vegetable stalls; children play games and sip ginger beer in the Antenna Cafe and Studio; parents from the more  affluent parts mix with those from council estates. And no one looks or feels out of place there, as class divides are non-existent.

It’s this cohesion of the community which was always Jones’ goal from the start. She and her co-founders spent a year thinking about the project, before opening their ideas up to the public through a series of open meetings. Jones says that the whole point of Crystal Palace Food Market was to “support sustainable farmers and food producers, and build community resilience”. She told The Canary:

It was set up on voluntary energy; we all worked without pay for three months. Now everyone who works for the market, in any way, gets paid the London Living Wage. Once it was up and running, we tried to address people’s concerns by listening carefully and engaging in discussions, without patronising or preaching. We also try to have a ‘default yes’ for anyone local who wants to bring something to the market. After all, it is a market for the people who live here.

Stall holders contribute 10% of their earnings back into the market project. But only ever up to the value of £90. Jones says that she and her co-founders will help anyone who wants to set up a stall. “We empower them and hold their hands through the first few markets”, she says. “Once they’re trading here, they can go on to all the other London markets with a bit more confidence”:

Jones was brought up on a small farm in Beirut. She and her co-founders all believe strongly in the principles of organic foods. And their wish for the community to be able to access such food in Crystal Palace was a real driver behind the project. It shows, too, as the stalls at the market are a goldmine of locally-produced, quality goods. But it was also the Transition movement’s ethos which inspired them. Jones told The Canary:

Small actions count and give hope to others to act. Consciousness raising is important as we all are so dependent on globalisation, especially oil, with many not even knowing it. Helping everyone to live in awareness is one of our aims.

One perfect example of “small actions” giving hope to others came in the case of Elizabeth Mander. She initially ran an arts and crafts stall on the market called “Handmade Palace”. Jones told The Canary that Mander “took the stall and ran with it, building it into an artists’ collective, a successful local art trail and ran a number of large makers’ markets”. She said:

From this position of strength, Beth has been able to take over a disused pub and turn it into an artist’s space called the Paxton Centre. She’s taken many of the community elements and used them to start up a successful business.

Crystal Palace Food Market is a wonderful example of what communities can achieve when they are engaged and involved in projects from the start. As Jones put it, “the Transition movement works ‘bottom up’, garnering existing energy into positive actions that build further energy”. And energy is something the market has in droves. The prices are reasonable, everyone is warm and welcoming, and the selection of produce is impressive. But what’s most endearing is Jones and her co-founders’ ethos. That building another world is possible. And projects like Crystal Palace Food Market may just be the beginning.

– Find out more about the market.