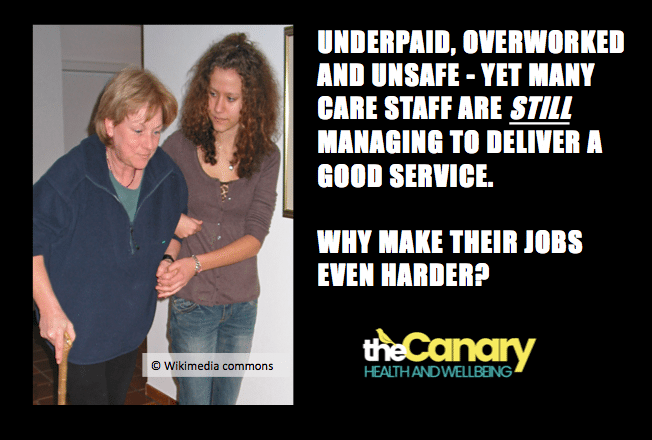 Carers should be lauded despite being overworked, underpaid and unsafe, based on research just released by the Care Quality Commission.

Despite the devastating impact of stealth privatisation on health services, the latest State of Care report found that 59% of adult social care providers and 39% of hospitals received overall ratings of ‘good’ or above.

“The environment for health and social care will become even more challenging over the next few years,” says the report.

“Tensions will arise for providers about how to balance the pressures to increase efficiency with their need to improve or maintain the quality of their care”.

The report also gave what can only be seen as a damning verdict on the impact of cuts on safety now and in the future. Inspectors found that safety levels in 61% of inspected locations are not good enough – a further 13% were rated as being in need of urgent attention.

Understaffing and underfunding are already contributing to near-intolerable working conditions for carers and health providers, which affect their wellbeing and the quality of service they are able to give to patients.

The report gave examples of where over-stretched professionals had made the following mistakes:

As other commentators have noted, the tone of the media on this topic has focussed on blaming nurses and carers, as if these hardworking people (that most of us will need to help us at some point in our lives) were deserving of this unnecessary scapegoating. What many people are failing to see is that austerity is the cause of these issues – not the solution.

What is this likely to be used by the government to justify? More “efficiency drives”, more cuts, overt pressure on an already exhausted workforce, as if there were a purposeful bid to orchestrate the NHS’s destruction. This is despite the terrible service levels revealed earlier this year in Hinchingbrooke – the government’s flagship fully privatised NHS trust which proved a financial and operational disaster.

Rather than using this report to save the NHS, the government will use it to kill it.

A responsible government with a focus of public interest and public health would seize this chance to support carers and health professionals, and identify ways in which they can improve, whether that be through resources for proper staffing, training or equipment. This report needs to be given a constructive purpose rather than being used as a stick with which to beat an already battered profession. As the report states:

“The initial results from our re-inspections so far suggest that half of services have been able to improve their ratings within six months. Our survey of providers also shows that they find our reports useful in identifying what they need to do to improve.”

This shows that healthcare staff are so committed to improving care levels, that they are doing so even under these pitiful conditions.

So let’s support and congratulate our doctors, nurses and carers. Their jobs are hard enough.