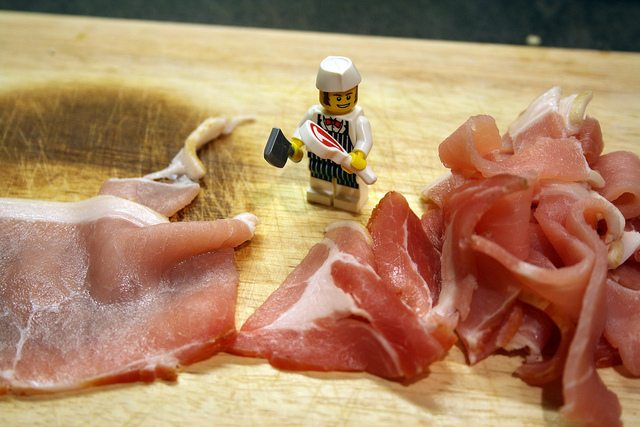 The World Health Organisation (WHO) released a report last week that categorised processed meats as carcinogenic and red meat as possibly cancer causing. The mass media then decided to serve up a recipe for panic, despite the fact that the WHO had published an almost identical recommendation in 2002.

The Guardian, for example, published this title:

Processed meats rank alongside smoking as cancer causes – WHO

The Mirror chose to go with a stronger warning:

Bacon, ham and sausages have the same cancer risk as cigarettes warn experts

While The Express went for this sensationalist headline:

“Bacon and hot dogs cause CANCER- and are almost as bad as SMOKING, says UN.”

All of these headlines suggest a carcinogenic parity between cigarettes and sausages, when in actual fact that’s not at all true. In reality, the WHO says that cigarettes can increase the risk of cancer by 2,500 percent, while 50 grams of processed meat per day will make cancer 18% more likely. However the 18% figure has been widely misrepresented.

Jonathan Schoenfeld, an assistant professor at Harvard Medical School’s Department of Radiation Oncology, explained to readers at Mashable.com that it is a relative figure not an absolute one.

The statistic doesn’t mean that eating 50 grams of processed meat daily causes you to have an 18% total chance of developing cancer — it means you’re 18% more likely to develop cancer relative to whatever your initial, absolute risk already was. For example, if you had a 10% risk of developing colon cancer to begin with, and you ate 50 grams of processed meat every day, your risk would increase by 18%.

To give some perspective, according to Cancer Research UK findings reported on the BBC, 21 percent of bowel cancers are related to processed or red meat, with around 34,000 people thought to die each year because of diets high in processed foods.

The figure for smoking related deaths, however, is estimated to be 1 million; with 86% of lung cancers related to smoking.

An expert at the Meat Advisory Panel, Emeritus Professor Robert Pickard of Neurobiology at the University of Cardiff, has some advice in light of the report, and the media’s interpretation of it.

So comparing them is not only inaccurate, but also misleads people as to what action they need to take. In fact, research reveals that the public tends not to respond to food scares in the long term.

When you look at food scares in general, certainly there’s always an immediate impact, because it’s not appetizing to read about this… after a while, the consumption pattern bounces back.

says Andreas Boecker, a food science professor at the University of Guelph in Canada. The Farmer’s Guardian also reminds its readers that food scares go through phases; giving the example of eggs, which were once considered bad due to cholesterol and are now seen as a healthy food.

Helpfully, the WHO have shared a Q&A to help clarify the questions raised by the initial announcement, but the media have moved on. The ultimate message should have been that depending on a person’s initial cancer risk, they may need to review the types of meat they eat, as well as the volume (as Cancer Research UK has suggested in a blog post following the report’s release), but this important, more nuanced message was lost in the frenzy.

It’s clear that we need to be educated about the potential risks in the foods we eat, but this needs to be a thoughtful, considered effort; rather than through sensationalist attempts at scaring people.