Media hysteria: Look who is trying to twist Corbyn's words this time - Canary 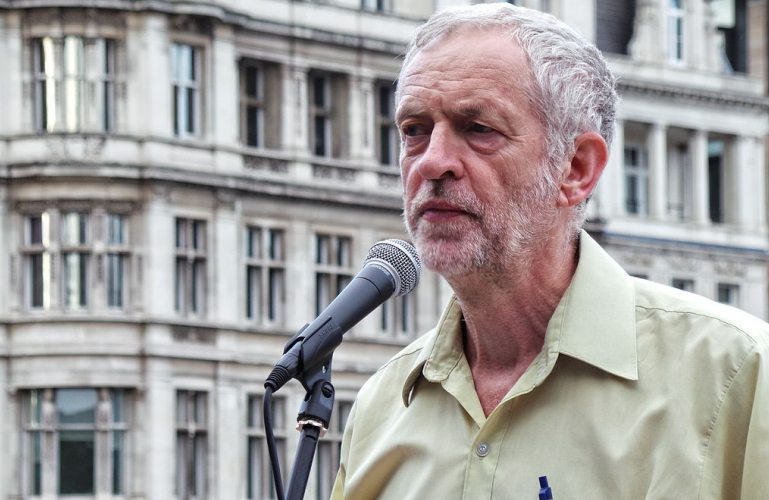 The new leader of the Labour Party, Jeremy Corbyn, has become possibly the most controversial man in Britain since early in the summer because of past statements he has made, and yet on close examination, none of the accusations aimed at him stack up.

A new example of the pattern has emerged over this last weekend, featuring a fresh tidal wave of hysteria in the right-wing tabloids. As ever, it turns out that it is all a fuss about about one small part of what Corbyn said, which, when put in context, means something different.

Of what horrendous ‘Devil’s Advocacy’ has Corbyn been accused this time? Allegedly, he once implied that commemorating those who died during the World Wars between 1914 and 1945 is in some way pointless or a waste of time. The remarks in question were from a speech he delivered in spring 2013, discussing the then-upcoming events to mark the 2014 centenary of the start of the First World War.

The Daily Mail has accused Corbyn of suggesting in the speech that the commemorations were ‘pointless’, and claimed that he “denounced… shed-loads of money spent” on them. (How easily The Daily Mail switches, incidentally, from being angered by the notion of governments spending taxpayers’ money, to being angered by the notion of governments not spending it, when the latter is supposedly suggested by Corbyn.)

Meanwhile, The Daily Express, ever-meticulous in its tireless crusade for pinpoint accuracy, said that Corbyn’s “shocking remarks come just a week before Remembrance Sunday”. Which of course they do not. He made the remarks some two-and-a-half years ago, if not longer. That the remarks are being highlighted just over a week before Remembrance Sunday is thus a matter for which the media are responsible, not Corbyn; if they find it distasteful, there was nothing to stop them raising the subject over a month ago.

Now, the video in question is on YouTube and can be accessed here – I have set the link to join the video at the part of the speech that has caused uproar. Corbyn says the following:

What these tabloids leave unmentioned is what Corbyn said afterwards:

… other than the mass slaughter of millions of young men and women, mainly men, on the Western Front and all the other places.

And it was a war of the declining empires and anyone who’s read, or even dipped into [presumably John A.] Hobson”s great work of the early part of the 20th century, written post World War, presaged the whole First World War as a war between monopolies fighting over markets.

The reason I say this is next year, the government are planning this celebration, and I think that’s an opportunity for us. It’s an opportunity to discuss war and discuss peace and to put up an alternative point of view.

So, to take the sentence that has been cut off half-way through, we can see from the second part that Corbyn did say that the sacrifice of those who had died should be commemorated. His criticism of the commemorations is more about their possible tone, potentially trying to cast the First World War in a completely honourable or even romantic light – hence the use of the word ‘celebration’.

His objection was against ‘shed-loads of money’ being spent on trying to glorify the First World War. Such an emphasis to the centenary would indeed have been vulgar, although in fairness, I would accept in hindsight that most of them had a suitably sombre tone instead. But of course, Corbyn could not have known that when he was speaking in 2013.

Corbyn was also arguing that, instead of just having lots of the usual parades and flag-waving, it would have been constructive to use some of the time during the centenary to debate the whole notion of whether warfare is ever necessary or worthwhile. No matter which side of that discussion one might stand on, there is evident merit in at least having such a discussion, especially given how never-endingly Britain manages to remain at war.

This technique of misrepresenting someone’s opinions while not actually misquoting them (thus making it possible to claim that no lies have been told) has been rampant in the media and on the internet for many years. It is popular with, among others, creationists, climate-change-deniers, and spin doctors in the USA – especially but not exclusively Republican ones. It goes by the name of ‘quote mining‘.

It is also becoming tiresomely popular among the right-wing British media, who have used it repeatedly in recent months to cast Corbyn and his opinions in a misleading light. Consider the fuss during the Labour leadership campaign over Corbyn once greeting representatives of Hamas and Hezbollah as “my friends”, when it was so obviously just a bit of diplomatic protocol that the situation had demanded.

Or the equally silly furore over Corbyn saying that the death of the Radical Islamist, Osama bin Laden, was a ‘tragedy’, when Corbyn had quite clearly meant that the failure to capture Bin Laden and put him on trial was the tragedy, as assassination turned Bin Laden into a martyr and lent credibility to the use of unilateral action. (The Prime Minister, David Cameron, continues to try and score cheap political points through that same distortion months later.) For what it is worth, I concur entirely with Corbyn on bin Laden’s death, and did so at the time.

Corbyn is mired in controversy because of quotations like these. But by my reckoning, near-enough all of them are quote-mines. The only controversy I have noticed that is not a quote-mine is Corbyn’s failure to sing the National Anthem during another Remembrance service in September. Even the reaction to that was close to deranged, as no one has been able to explain since then what God Save The Queen – a dreary, tuneless dirge lionising one human being above all her fellow countrymen entirely through accident-of-birth – has to do with remembering those who have fallen in battle. Those who cry out for respect for the monarchy are begging a slightly different question i.e. why should a self-confessed republican offer respect for an institution that embodies what he opposes? Surely that is just a matter of personal conscience, and is neither outrageous nor disrespectful to the dead.

As for the quote-mines, discounting all the ones I can think of, I can recall nothing Corbyn has said that has sounded noticeably outrageous or ‘foot-in-mouth’ at all. In fact, I ‘open the mic’ to readers at this point; if you can think of a controversy surrounding Corbyn since he joined the leadership election campaign that he genuinely brought on himself, and is not the result of distortions or manufactured hysteria, please list it in the comments below. I will update the article if anyone can remind me of a controversy that Corbyn has genuinely triggered by his own words in-context.

If you are reading this sentence, clearly, this has not happened.