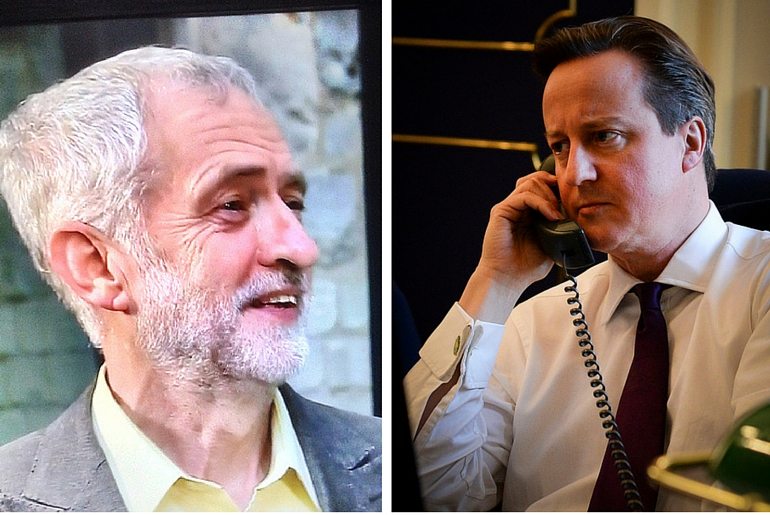 David Cameron has abandoned plans to push for military action in Syria. He will not call for a vote in the House of Commons on the issue, according to both the Guardian and The Times. This will bolster Jeremy Corbyn’s opposition to military intervention in Syria.

Cameron fears he may look weak if he calls for a vote on military action in Syria and loses it again, like he did in 2013. Although 20-30 Labour MPs may vote in favour, this would be counteracted by the same number of Conservative MPs who might vote against.

Cameron’s U-turn is good news for Corbyn as he continues to grow in his role as Labour leader. Last week Cameron appeared ashamed of avoiding Corbyn’s questions at prime minister’s questions. In addition, Corbyn has been praised as responsible for scuppering the British government’s deal with the human rights abusing regime in Saudi Arabia. This week, the Scottish Labour party has also backed Corbyn’s calls to cancel Trident.

Downing Street have responded by describing the claims as “complete nonsense”, according to the BBC.

The foreign affairs committee, which has a Conservative majority, has recently cast doubt on the worth of military action in Syria. They have also questioned the legality of any UK intervention. The committee said that although something must be done:

we believe that there should be no extension of British military action into Syria unless there is a coherent international strategy that has a realistic chance of defeating ISIL and of ending the civil war in Syria.

In the absence of such a strategy, taking action to meet the desire to do something is still incoherent.

Parliament may finally be learning its lesson from the failures of Afghanistan, Iraq and Libya. In Afghanistan, the Taliban are regaining territory despite 13 years of a British military presence. In Iraq, Western intervention led to the emergence of Isis, al-Qaeda and Shia militias – adding to the chaotic bloodshed. This has led the UK to try and fix the mess it helped create, by bombing Isis out of Iraq. The result of this is clear to see – Isis is stronger than ever.

And the forgotten disaster in Libya – Cameron’s Iraq – has led to a mass exodus of people as chaos continues to rule in Libya. There is a recurring theme here.

History shows us that adding more bombs into the equation is not the answer to the suffering of the Syrian people.