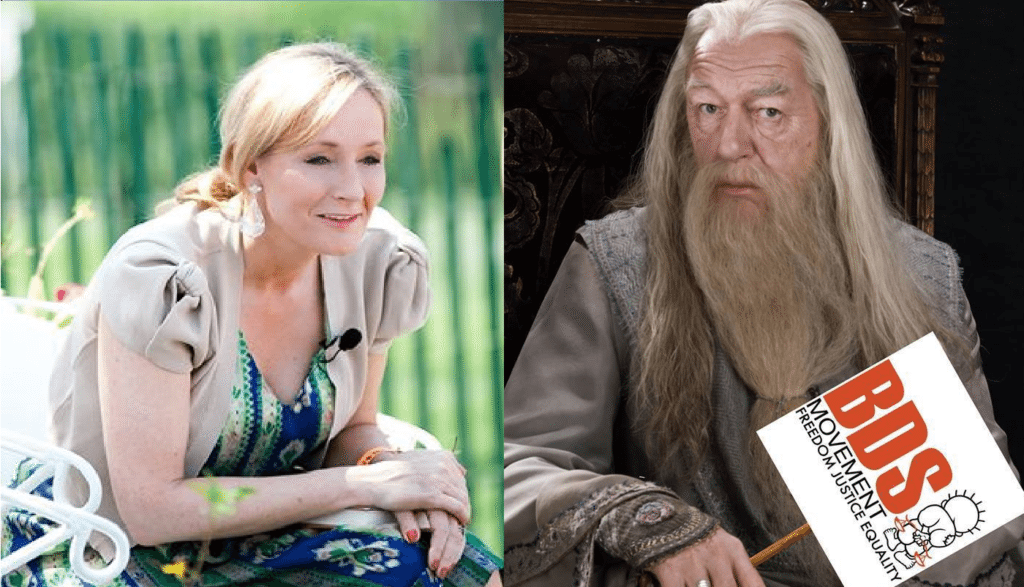 JK Rowling recently co-signed a letter opposing the cultural boycott of Israel, which aims to hold the state to account for withholding the basic rights of equality, freedom and self- determination from Palestinians. The letter announced support for the Culture for Coexistence movement, which advocates cultural engagement with Israel, denouncing “divisive and discriminatory” boycotts.

Mia Oudeh, a 25 year old Palestinian, has now challenged Rowling with a letter of her own, applying lessons from Rowling’s own Harry Potter world to the Israeli occupation.

Israeli forces and the Death Eaters

The first comparison Mia Oudeh draws is between Israeli forces and the Death Eaters. In the Harry Potter world, the Ministry of Magic – their political headquarters – is taken over by Voldemort’s Death Eaters.

When the Death Eaters take over the Ministry of Magic and begin to run the magical world, would you have placed them in an equal side to the Potter trio?

The Death Eaters had an oppressive regime over the magical world. Similarly, Israel controls the exports, imports and movement of the Palestinian people in Gaza. All are subject to the approval of Israeli forces.

the Death Eaters had the advantage of fighting together using the unforgivable curses, having an army of brutal magical creatures including giants and dementors, having magical spells to track the Potter trio’s movements and having full control of the magical world through their position of power

Oudeh parallels the death eaters to a disproportionate Israeli military, operating with the 11th most powerful army in the world and receiving $10.2m in US aid every day.

Harry was working in isolation with the support of his two friends. His “side” were terrorised families who could not step one foot out of line in fear of being tortured and/or killed, or who were in hiding and on the run.

Like Harry, Palestine does not have an army. Its resources are dwarfed by Israel’s.

you can see the Israeli Defence Forces kitted out in uniform, armed with guns and helmets and tanks and illegal chemical weapons and f16s and drones. In contrast, you see Palestinians with rocks and handmade weapons, if they are lucky enough.

Oudeh then compares the treatment of muggle born wizards, to that of Palestinians.

Muggle-born students were singled out in Hogwarts when the Death Eaters started teaching there, and some muggle borns had to go on the run and were often rounded up by Snatchers.

She uses this to highlight the segregation of the Palestinian people.

Will our cultural bridge of peace bridge Shuhada street in Hebron, where Palestinians literally have to use a specific walkway separate to Israelis?

Maltreated families in the wizarding world and Palestine

Oudeh then looks at the terrorisation of families under the Death Eater regime.

She likens this to the treatment of Palestinian families by Israeli forces.

Control of public opinion is key to maintaining an oppressive regime. Oudeh goes on to compare the propaganda facing Harry to what faces resisting Palestinians.

Like the propaganda created to argue that muggle borns stole magic, propaganda is dispersed everywhere to paint Palestinians as terrorists, and Israelis as victims. Harry was depicted as dangerous and mad, like a terrorist, to the wizarding community

Oudeh suggests the importance of sources through this analogy.

I only hope that you have not taken your information from the Zionists’ version of the Daily Prophet, but rather the Palestinians’ version of Potterwatch

The mainstream media paints the Israel- Palestine conflict in a way that distorts the facts. Over 2,300 Palestinians were killed by Israeli forces in 2014. Just 39 Israelis were killed, yet Palestinians are the ones vilified by the media.

Oudeh’s open letter went viral and Rowling has responded with her own Harry Potter analogy. She counters with Dumbledore, the moral center of the books. Dumbledore reaches out to Snape, despite him being a death eater.

Why did Dumbledore go when Snape asked him to go, and why didn’t he kill him on sight when he got there?

Snape then plays a key role in the overthrow of Voldermort’s regime.

At the moment when he answers Snape’s call, he cannot know that Snape isn’t going to try and kill him. He can’t know that Snape will have the moral or physical courage to change course, let alone help defeat Voldemort. Yet still, Dumbledore goes to the hilltop.

This is not an appropriate comparison. Boycott Divestment and Sanctions (BDS) is not trying to kill Israelis, but take away their wands. Oudeh has called out Rowling for the second time.

By endorsing BDS, we are brandishing our wands, shouting “Expelliarmous” and disarming one of the most brutal, racist states in the world.

Expelliarmous is the disarming spell in the Harry Potter books.

Rowling doesn’t clarify whether she opposes only the cultural aspect of BDS, or the movement as a whole. Either way, the two are linked. The majority of cultural interactions with Israel are likely to bring economic benefit. The cultural aspect is partly a subset of the wider economic boycott.

In her reply, Rowling talks about beneficial cultural interactions with Israel.

What sits uncomfortably with me is that severing contact with Israel’s cultural and academic community means refusing to engage with some of the Israelis who are most pro-Palestinian, and most critical of Israel’s government. Those are voices I’d like to hear amplified, not silenced.

Oudeh responded, saying BDS does not mean shutting out Israelis who are against the occupation.

Of course we support the Snapes of Israel. These Israelis have denounced their government

She uses the example of Boycott from Within, a movement that supports BDS from within Israel, to show that Israelis who speak against the occupation are not silenced. Finally she turns to Dumbledore’s resilient resistance to Voldermort’s oppression.

So, yes, Dumbledore as an academic would absolutely meet Snape on the hilltop. But he would also understand the legitimacy of the BDS movement – he was a part of the Order of the Phoenix, and was therefore a part of the movement against the oppressors of the wizarding world.

Israeli officials themselves have called the boycott the “greatest threat” facing Israel. It is easy to see why, there are many instances of BDS success. French multinational Veolia has been targeted by BDS since 2008 for providing infrastructure services to illegal settlements. BDS campaigns led to them losing out on contracts worth at least $14bn. The European Parliament did not renew a contract with the company G4S, after BDS action. G4S equips Israeli prisons that hold Palestinian political prisoners. Scores of artists have refused to play in Israel.

BDS is the only peaceful way to end the Israeli occupation. It puts strong economic pressure on Israel and represents international condemnation of the oppression. While culture and art can enlighten, it is BDS that will systematically force the Israeli government to step back.

You can sign Mia Oudeh’s petition for Rowling to remove her signature here.