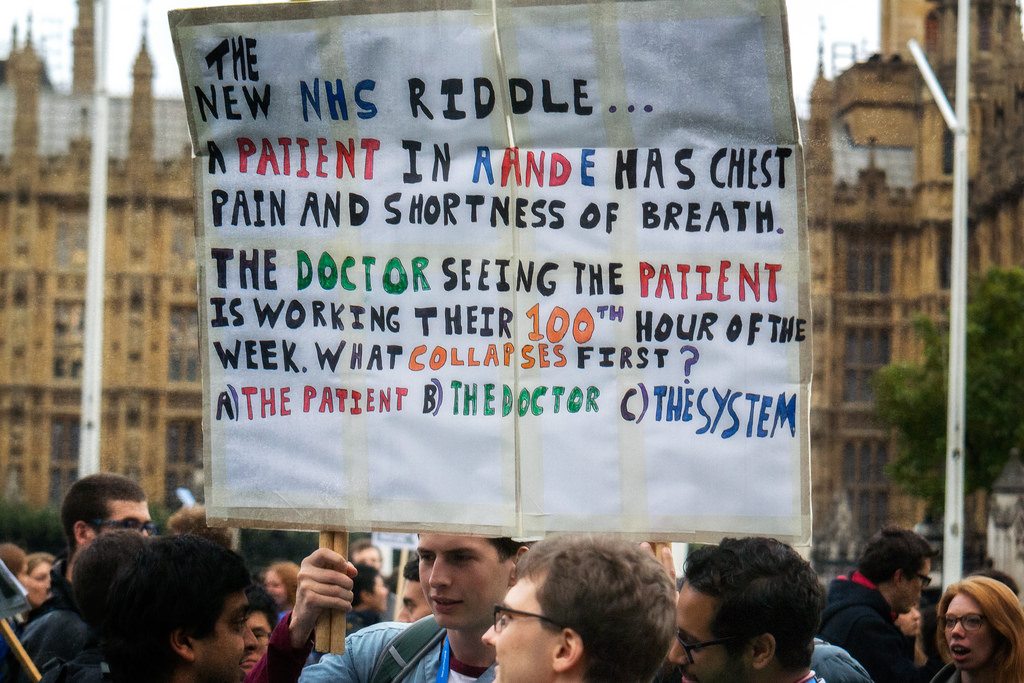 Junior doctors have almost unanimously voted in favour of striking in December, in the first ever all-out strike in the history of the NHS. The decision follows Jeremy Hunt’s failed attempts to put a positive spin on his plans to make junior doctors work even longer hours for less pay – putting medics and patients in danger in the process.

The vote numbers speak volumes: of the 37,000 junior doctors in England, more than 99% have voted in favour of industrial action (excluding a strike), and 98% for an “all out” strike.

As junior doctors stand united against a contract branded “unsafe” and unfair by a litany of medical experts, this resounding mandate from the British Medical Association’s (BMA’s) members provides the strongest signal yet that Jeremy Hunt’s vision for a “seven-day NHS” could be about to go up in smoke.

The decision means that in many hospitals next month, non-A&E services, such as planned operations and outpatient clinics, would need to be cancelled on the three strike days announced so far: 1, 8 and 16 December. The BMA – the union for the medical profession – has deliberately released the dates for the proposed strikes well in advance, to enable hospitals to make plans to minimise disruptions to their services.

We regret the inevitable disruption that this will cause but it is the government’s adamant insistence on imposing a contract that is unsafe for patients in the future, and unfair for doctors now and in the future, that has brought us to this point.

The health secretary is right when he says this action is ‘wholly avoidable’. Our message to him is that junior doctors have today made their views perfectly clear but that it is still possible to get back around the negotiating table to deliver a contract that is safe for patients, contains the necessary contractual safeguards to prevent junior doctors being overworked and properly recognises evening and weekend work.

The BMA is reaching out to Hunt and NHS Employers to offer “last-chance” conciliatory talks to clarify the conflicting information coming from government over the past weeks and – they hope – to finally put this much-reviled contract to sleep indefinitely.