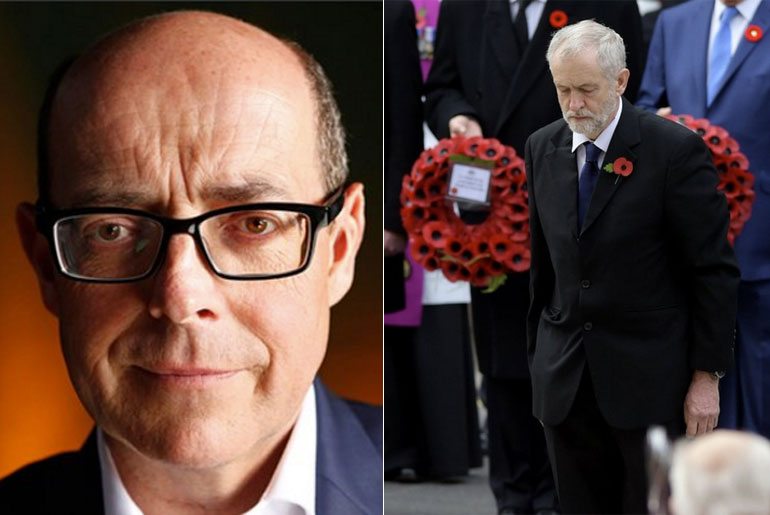 The BBC’s former political editor has confessed he was shocked by the way the BBC rubbished Jeremy Corbyn during his election campaign, and he wrote to BBC colleagues to express his concerns.

Nick Robinson is a stalwart of the BBC establishment. He was the BBC’s political editor for a decade. He now works on Today, Radio 4’s flagship news and current affairs programme.

And he is not exactly left-leaning. A founder member of the Macclesfield Young Conservatives and president of the Oxford University Conservative Association in his youth, Robinson has in the past been accused of pro-Conservative bias.

But have a look at this interview with him in the Sunday Times (subscription) last weekend:

Was Robinson as shocked as I was by the way the BBC (and other media) rubbished Jeremy Corbyn? They couldn’t seem to get over the fact that he didn’t always wear a suit. “Yes.” [Robinson replied] “Oddly, although I was off work, I did drop a note to a few people after his first weekend saying this is really interesting and we owe it to the audience to sound as if we’re interested.”

The BBC has defended itself from accusations of anti-Corbyn bias before. But an accusation from its own former political editor raises serious questions about why that bias has arisen – and why it has been allowed to thrive.

A failure of imagination

Mainstream media, by definition, seeks to report mainstream news. For political journalists over the last two decades, that has generally meant reporting views from within a very narrow political spectrum: the neoliberal consensus. Thus, in the early stages of the Labour party leadership election, the mainstream media fell over itself to let us know that Corbyn would not, could not, win.

This was a failure of imagination rather than overt bias; Corbyn blindsided the pundits simply because opinions like his had not been seriously aired in the mainstream media for decades. They didn’t know what to do with him.

In his Sunday Times interview, Robinson put it like this:

What makes Corbyn so intriguing – and hard to report on – is that he’s jettisoned all the old rules, all the laws of political gravity. These assumptions, for example, that you can’t possibly be elected if you reject nuclear weapons, have been around since I was 18, but maybe things are not that frozen. You can find certain retired generals and admirals who are sceptical about spending money on Trident.

From marginalisation to demonisation

But when it became clear that Corbyn could, and would, win, the marginalisation of Corbyn’s views quickly turned to demonisation. Smears and scaremongering began in earnest – mostly emanating from the Labour party (remember those pleas from Blair, Mandelson and Brown?). But some stories were instigated by the media itself – notably a BBC Panorama programme that aired three days before voting closed.

The Panorama producers, apparently, gained access to Corbyn by telling his team they were filming for a documentary about all four Labour leadership candidates. The actual programme focused almost entirely on Corbyn, and it served as an unrestrained character assassination. Corbyn’s supporters took to social media en masse to object, Diane Abbott called it a hatchet job, and Jeremy Corbyn’s team complained to the BBC about factual errors.

Since his election victory, the hostility from the mainstream media has continued with an unusual intensity. Have a look at this News at Ten feature by Nick Robinson’s replacement as BBC political editor, Laura Kuenssberg:

What does it say about the BBC that the leader of the opposition, in declaring a commitment to international law and global peace, is portrayed as a danger to the country, if not the world, with no counter-view allowed?

When not outright hostile, coverage of Corbyn has often been inane, focusing on his appearance, his preferred modes of transport, or the depth of his bow.

Some of this can be explained by a kind of ‘establishment bias‘, which permeates most of the mainstream media. But does the BBC – whose core commitment to its audience is impartiality – have an outright political bias too?

Both ends of the political spectrum accuse the BBC of bias against their own political views. But as The Canary has previously reported, a major content analysis from Cardiff University suggests the BBC does in fact give Conservatives more air time than their Labour counterparts (even when you account for which party is in government at the time).

If this is true, then why? Writing for The Guardian, Ivor Gaber describes a revolving door between the Conservative party and the BBC: Andrew Neil, former researcher for the Conservative party, presents several hours of political and current affairs television every week. Nick Robinson’s own former senior producer, Thea Rogers, left the BBC to advise George Osborne. Robbie Gibb, former chief of staff to Francis Maude MP (Conservative), is now head of BBC Westminster. And of course the former chair of the BBC Trust was ex-Conservative cabinet minister Lord Patten.

One last snippet from Nick Robinson’s Sunday Times interview is revealing. Robinson seems to have been intrigued by Corbyn, even charmed:

Even though I was off work, I was so frustrated that I couldn’t cover Corbyn’s election, I took myself off to a Corbyn rally. My wife thought I was very sad, but I thought, I’ve got to go and see this for myself!

These qualities may in the end inoculate Corbyn from some of the media bias against him. He is so self-evidently decent that attacks on him tend to say more about his attackers than they do about him. And he is interesting – even to hardened political hacks. If people keep seeking to find out more for themselves, through social media or elsewhere, then the mainstream media may yet turn out to be a little less important than it thinks it is.