Unlike in the UK, Canada's new cabinet members are actually qualified for their jobs - Canary Workers’ Co-op 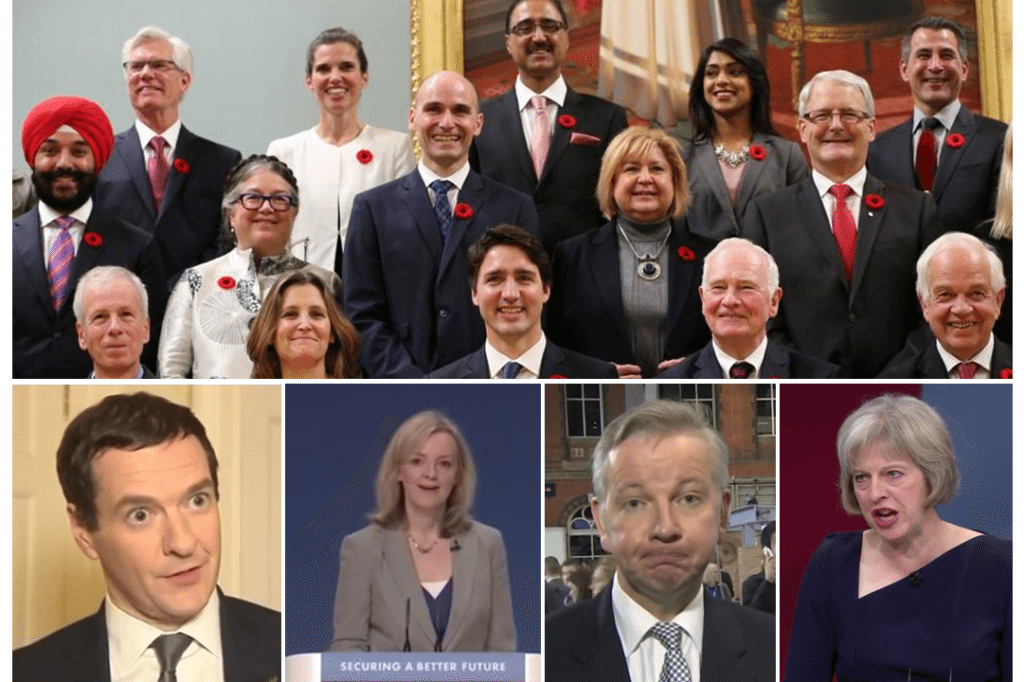 In Canada’s new government, ministers seem to have been chosen for the expertise they can bring to their roles. In the UK, that’s a pretty alien concept.

Blogger Chadji Kanji recently took to Facebook to praise the new Canadian government of Justin Trudeau for appointing ministers whose previous careers made them suitable for their new jobs:

It’s a common gripe in the UK that politicians are out of touch with reality and, in particular, that ministers often appear to have limited expertise in their area of responsibility. Let’s make a few comparisons with Canada.

The UK’s prime example of someone whose ineptitude comes as no surprise to anyone who’s seen his CV is the chancellor, George Osborne. Having no economic background and work experience as a towel folder (sorry, towel re-folder) apparently paled into insignificance compared to his years of greasing up through the ranks at Conservative HQ. Friends in rich places seem to be the currency of Osborne’s career.

Bill Morneau, Canada’s minister of finance, built his case for running the country’s economy not just on a track record of public policy involvement, but also by vastly expanding his family business. Unlike Osborne, his party’s policies mean he will have to oversee an increase in his own tax burden.

In Canada, the appointment of Hunter Tootoo as minister of fisheries and oceans and Canadian coastguard has been welcomed as a sign that the almost inconceivably enormous Arctic coastline (think about it, there are thousands of islands) is finally being given attention as well as the Pacific and Atlantic coasts. Tootoo is an Inuk and representative for the northern province of Nunavut. His entire political career has revolved around issues of shipping, fishing, and the ocean.

Liz Truss, on the other hand, seemed to bring almost nothing to her role at the department of environment, food and rural affairs. About the best that could be said was that she had, albeit briefly, represented a rural constituency, and that she wasn’t an avowed climate change denier like her predecessor. She demonstrates an admirable passion for appearing passionate about her work but it does seem like she’s just reading off an autocue:

Meanwhile, Michael Gove had no qualifications to be education secretary and he has equally few for the position of justice secretary, apart from once advocating the return of hanging. The comparison with Jody Wilson Raybould, his Canadian counterpart, could hardly be more stark. A First Nation regional chief and former crown prosecutor, she is expected to take a lead in launching a public inquiry into disappearances of First Nations women.

Canada’s sports portfolio is combined with the brief for persons with disabilities, and the new minister Carla Qualtrough is a former paralympic medallist and International Paralympic Committee member. In the UK, sport is lumped in with culture and media. While in opposition, the now minister, John Whittingdale, was chair of the culture, media and sport select committee. He said at the time:

I am lucky that the committee’s remit also covers my hobbies: I love television, films and music

Whittingdale’s career, like Osborne’s and so many of what The Canary has called the “permanent political class”, has been spent almost entirely within the Conservative party machine, apart from a brief hiatus when he whooshed out of the revolving door into Rothschild Bank (where he shared an office with Oliver Letwin) and then straight back in again to join Margaret Thatcher’s staff.

One member of the current UK cabinet stands apart from the mass of over-educated, under-experienced chinless wonders. Patrick McLoughlin, the transport secretary, didn’t attend Oxford (which at least 11 of his colleagues did) or any another grand institution (almost all the others). He studied at Staffordshire College of Agriculture, spent five years farming, and then became a coal miner. We can probably infer from this that he can drive a tractor (which may be unique within the cabinet, and arguably gives him a useful perspective on traffic congestion).

So does the UK have a winner at last?

Nope, the Canadian transport minister can drive the Space Shuttle.