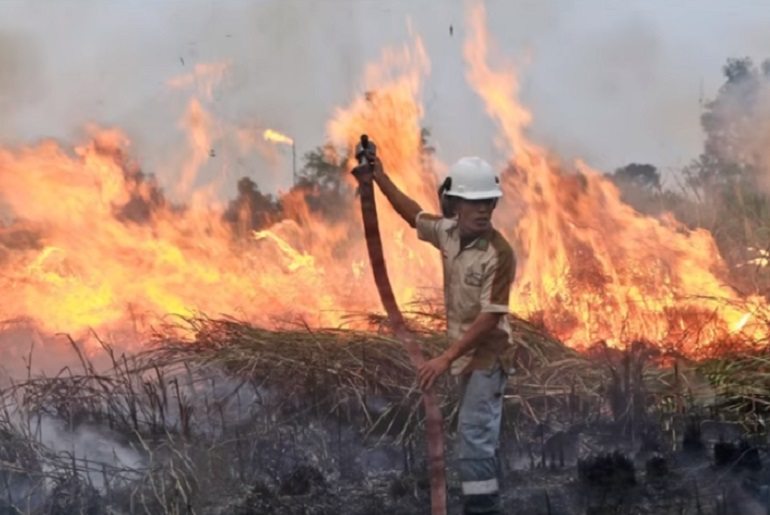 This year’s global CO2 figures are expected to break records – as they have done for the last 30 years in a row. This year’s figures are inflated, by the forest fires in Indonesia that have been raging for months. No one has yet calculated how far the emissions from these fires will move the ‘runaway-climate’ tipping-points under discussion at the largely Big Oil-sponsored United Nations Conference on Climate Change in Paris.

The crucial 2C rise in global average temperature could be breached years earlier than expected as a result of these fires, because of the greenhouse gases and the particulate matter they produce. A moderate scenario puts the 2c rise between 35 and 70 years away. We don’t have time to spare. Already, the amount of CO2 the fires emit each day exceeds the daily output of the US economy – and that assessment was weeks ago.

The fires should be at the forefront of the news agenda, but as writer and environmentalist George Monbiot pointed out, they’re not. The destruction of tropical forests feels very distant, but the consequences of their eradication are bearing down on us, and the products they were sacrificed for are all around us. This Greenpeace drone footage shows the scale of the smouldering wasteland.

Indonesia’s pro-business environment and forestry minister, Siti Nurbaya, has said that 1.7 million hectares (4.2 million acres) have been destroyed. The effects of the fires don’t only cloud our future, but smoke is creating diplomatic discomfort as well. Skies are darkening across Asia and airports have been forced to close in neighbouring countries. The pollution is responsible for respiratory problems and it has already led to thousands of deaths – an entire cohort of missing children.

The situation is extremely bad in Indonesia where the peat bogs are especially carbon-rich. The ground can smoulder quietly for many months, flaring again when conditions are right. The strongest El Niño on record is further exacerbating the situation. 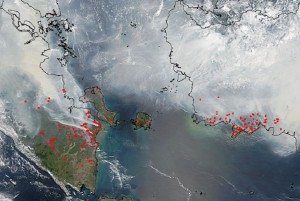 The size of the problem is hard to grasp. Hard because our brains aren’t wired to deal with anything of this scale, and hard because the reality is tragic, and frightening. As these staggering satellite images from the NASA Earth Observatory show, Indonesia isn’t the only place where this is happening – Northeast China, Northwest India, East Africa, and South America are also ablaze. Nor is this the only year: South America was particularly badly hit in 2009.

These fires are also morally asphyxiating because most of them are man-made. Big corporations are deliberately burning, scouring topsoil, and draining peat-land on a vast, industrial scale, largely for palm oil. This is not a question of small farmers clearing a patchwork of vegetable plots. As the inset photograph from Greenpeace shows, in the ruins of a diverse and ancient forest, palm oil seedlings are already sprouting. Teguh Surya, Indonesia Forest Campaigner at Greenpeace Southeast Asia, said:

There can be no question that the root cause of the fires crisis is decades of forest and peatland destruction by pulp and palm oil companies.These fires and the toxic haze will return year after year until plantation companies turn off their bulldozers. Businesses, must demonstrate serious efforts to work together to prevent forest fires by stamping out this reckless destruction and start protecting rainforests and peatlands.

Palm oil is a useful ingredient. As well as being a potential biofuel, it is in practically everything: soap, detergent, biscuits, chocolate, shampoo, noodles, and bread, to name a few. It’s not particularly digestible, but adds bulk, and in pure cash terms, it’s cheap. Along with glucose fructose sugar, palm oil is the go-to ingredient for any kind of processed food that needs a shelf life and a smooth texture. However, like corn syrup, humanity got along without it for millennia. No one needs palm oil.

No profit, no fire

Palm oil is so ubiquitous that it’s not easy to avoid. But, consumers do have a choice – and voting with your wallet is one of them. Through this we can withhold the financial oxygen, which feeds almost every blaze.

Once the true cost of palm oil is appreciated, it is hard not to confront the teflon-coated indifference of the companies that produce and purchase it. The result of this indifference is literally death and destruction – past, present and future. Consumer rebellion is one of the best tools we have. In Singapore, which is visibly affected by the ‘haze’ from the burning forests, several chains of supermarkets are removing Asian Pulp and Paper products from their shelves. We, as consumers, can also choose to let palm oil products sit, unbought.

On food labels watch out for palm oil and the weasel words for its derivatives, a few of which are listed below. The full list can be found here, and includes a long list of ‘goodies’ – though unfortunately a lot of the product labelling on ‘sustainable palm’ oil is very misleading, so the best thing is to avoid it altogether.

Girl guide activist, Madison Vorva, who brought the problems inherent in palm oil to the attention of millions of North Americans, also suggests:

Thankfully, the tide is turning on palm oil – momentum is gathering. People are watching films, reading, coming together and talking about what is happening. There are also several excellent petitions calling for action and aiming to protect specific areas, and Greenpeace are focusing on orangutans as the comprehensible face of this disaster. People are rebelling against the idea that palm oil is unavoidable and devising ways to tackle the problem.