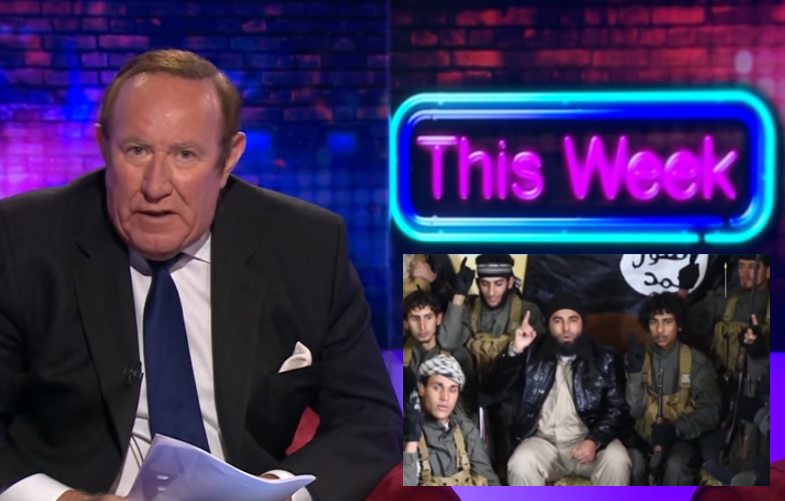 Love him or loathe him, the presenter certainly tingled lots of spines with his opening monologue on ‘This Week’.

Andrew Neil, a British media veteran and host of the BBC current affairs show ‘This Week’, used his regular opening slot on Thursday night to launch a fearsome broadside against the perpetrators of last week’s attack in Paris, describing them as “loser jihadists”. He said IS should stand for “Islamist Scumbags” and sent out the message: “You will lose”.

Neil focussed his wrath on the notion that Islamist extremists could hope to overthrow centuries of French cultural achievement and launched into a roll-call of Gallic creativity that ran through artists such as Gauguin and Renoir, philosophers including Descartes and Sartre, and musicians ranging from Debussy to, er, Daft Punk.

Clearly the Islamic world can lay claim to a pretty hefty roster of historical figures and some viewers felt that Neil was wrong to overlook many great Islamic cultural achievements. To be fair to Neil, he was drawing a very deliberate distinction between ‘Islam’ and ‘Islamism’, and specifically the highly regressive and anti-cultural set of beliefs to be found in groups such as Daesh and Boko Haram (literally ‘Western learning is forbidden’).

Evening all. Welcome to This Week. The week in which a bunch of loser jihadists slaughtered 132 innocents in Paris to prove the future belongs to them rather than a civilisation like France.

Versus what? Beheadings, crucifixions, amputations, slavery, mass murder, medieval squalor, a death cult barbarity that would shame the Middle Ages.

Well IS or Daesh or ISIS or ISIL or whatever name you’re going by – I’m sticking with IS, as in Islamist scumbags – I think the outcome is pretty clear to everybody but you.

Whatever atrocities you’re currently capable of committing, you will lose.

In 1,000 years’ time Paris, that glorious city of lights, will still be shining bright, as will every other city like it.

While you will be as dust, along with the ragbag of Fascists, Nazis and Stalinists that have previously dared to challenge democracy and failed.

Well, that quite definitely told them. Of course, a rabble-rousing speech is one thing and a properly worked out strategy is quite another. Andrew Neil’s monologue will summon up the blood and stiffen the sinews. Let’s make sure we use the energy and momentum to act creatively and positively and, in the spirit of so many of those great people from the past he’s reminded us of, bring humanity and harmony to our world.