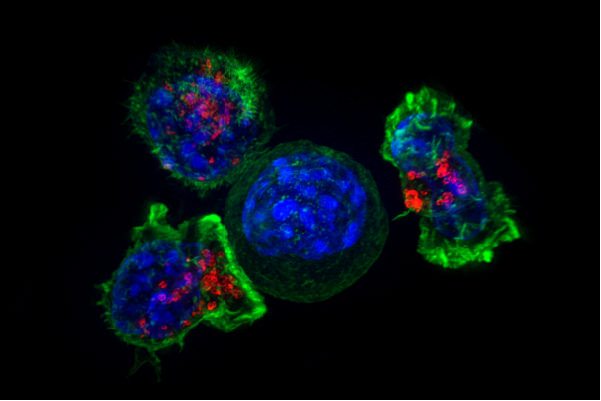 Two exciting recent developments have emerged that have the potential to change the way we treat cancer patients in future.

Firstly, a patient with metastatic melanoma (advanced skin cancer) has been successfully treated by combining two different types of immunotherapy. He remains cancer-free five years after the treatment –  he expected to just live a few more months.

Secondly, early stage research shows progress towards a cancer vaccine – again for advanced melanoma.  Excitingly, the vaccine could also be an early step on the road towards a ‘universal’ cancer vaccine.

Melanoma is one of the most serious types of skin cancer. Around 14,500 new cases are diagnosed every year in the UK. More than 2,000 people die every year in the UK from melanoma. It is also cancer that is on the rise – since the late 1970s, melanoma incidence rates have more than quadrupled. It’s thought that increased use of sunbeds is responsible for the rise.

An evolution in immunotherapy treatments

A team from the US combined the two immunotherapy treatments in a small trial of 10 patients with advanced skin cancer. They published their findings in the Journal of Experimental Medicine where they describe one man’s dramatic response to the combined treatments.

Twelve weeks after starting the combined treatment, his tumours started to shrink. After three years, he had complete remission. He remained disease-free five years later.

The first step involved taking immune cells from a patient, isolating those that can target the melanoma, then transfer them back.  The second step was to treat patients with an immunotherapy drug first shown to have an effect in 2010. It works by unleashing a patient’s existing anti-tumor immune cells, but complete cancer remission is rare using either treatment alone.

However, not everyone who was given the treatment reacted in the same way.  He and one other in the 10 person trial remain cancer free five years after the treatment. Two had a partial response, three achieved a stable disease, and three people’s cancer progressed. It is not known why just these two people responded so well.

We know from our research in the last few years that treatments which can get the immune system to target cancers like melanoma are helpful for some people, but we are always looking for ways to make them more effective.

Combining antibodies like ipilimumab with a patient’s own T-cells may [be] one way to do this, so this is an interesting trial and we look forward to seeing more results as it goes on.

The development of a potential ‘cancer vaccine’

The other exciting recent development is a study published in the journal Nature on an early stage trial of a cancer vaccine. It is a ‘nanoparticle RNA vaccine’. This high-tech approach saw the researchers extract a genetic code from cancer cells, called RNA. This was embedded in nanoparticles of fat, to make it appear like a virus. The nanoparticles were then injected into three patients with advanced melanoma.

The idea is to ‘teach’ immune cells to attack cancer cells. All three responded to the vaccine by producing immune cells to target the cancer cells, in the same way as if their body had detected a virus or bacteria. The vaccine had previously been given to mice, where it had been shown clear their tumours.

The purpose of the studies in people was not to test how effective the vaccine was – but how safe. Side effects were brief flu-like symptoms. The researchers did also report that in one patient, scans before and after the vaccine showed a tumour had shrunk. Even with this finding (with just three patients in this early trial) it is too soon to say if the treatment could work. Larger studies are now needed.

Professor Alan Melcher, from the Institute of Cancer Research, commented:

Immunotherapy for cancer is a rapidly evolving and exciting field. This new study, in mice and a small number of patients, shows that an immune response against the antigens within a cancer can be triggered by a new type of cancer vaccine.

Although the research is very interesting, it is still some way away from being of proven benefit to patients.

The researchers who carried out the study point out that their approach could potentially be used against any type of cancer.

[Such] vaccines are fast and inexpensive to produce, and virtually any tumour antigen [a protein attacked by the immune system] can be encoded by RNA,

However, as the research is at such an early stage, this is a very long way off. We don’t yet know if this approach is safe, effective or practical.

Could this change the way we treat cancer

These major developments could potentially become two new powerful new weapons against cancer. This is especially true for cancers that are currently hard to treat, like advanced melanoma. If they work, immunotherapies have been shown to potentially have long-lasting effects. Some have even labeled these cutting-edge therapies as potential cures. However, there is still much more work to be done in this exciting area of medicine before treatments like these are available to the general public.