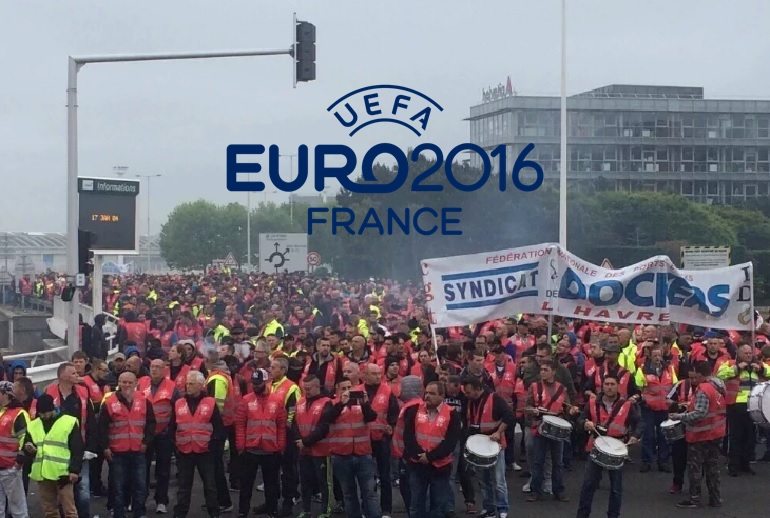 This week, France is not just clearing up after its worst floods in decades. Its citizens have also moved into their third month of resistance to government plans aimed at reforming the country’s labour regulations. And as the Euro 2016 football tournament approaches, a failure to settle this long-running dispute could hit the host country hard.

The French government’s proposed employment reforms have seen strong opposition since March, and have led to large collaborative protests. Students and unions came together on 31 March with a massive general strike attended by over 1.2 million people, and this event sparked the ‘Nuit Debout‘ (or ‘Night on Our Feet’) movement – which has organised people’s assemblies and occupied city squares.

Opponents of the proposed changes have said they will reduce workers’ rights and make it easier for companies to fire their employees. According to some polls, up to 70% of the French population is against the reforms, and over 1.3 million people have now signed an online petition opposing the changes.

A government under pressure

The government plans – referred to by some as “the bosses law” – have so far prompted strike action from railway and Metro workers, from employees of 16 out of France’s 19 nuclear power stations, and from Paris refuse collectors. Air France pilots have also threatened to strike. There have also been protests at most oil refineries and fuel-handling ports in the country.

Scenes like these have become commonplace in recent weeks:

Some of those on strike are protesting over specific changes in their own line of work in addition to the employment reforms.

State railway workers, for example, have been opposing changes to working times. On 6 June, CounterPunch placed this dispute into a context of increasing privatisation, in which profitability has become more important than safety. And this simply goes hand in hand with government attacks on workers’ rights.

The leader of the Force Ouvriere union, Jean-Claude Mailly, has expressed the feelings of striking workers as follows:

We’re not stupid. Nobody’s saying ‘we’re going to block the Euros’ … but when your back is against the wall, there’s little alternative but to continue

As time runs out before the start of Euro 2016 on 10 June, immense pressure is on French politicians to settle the country’s industrial disputes before Europe’s football fans descend on the nation’s stadiums.

It looks like the government will be in for a busy week.